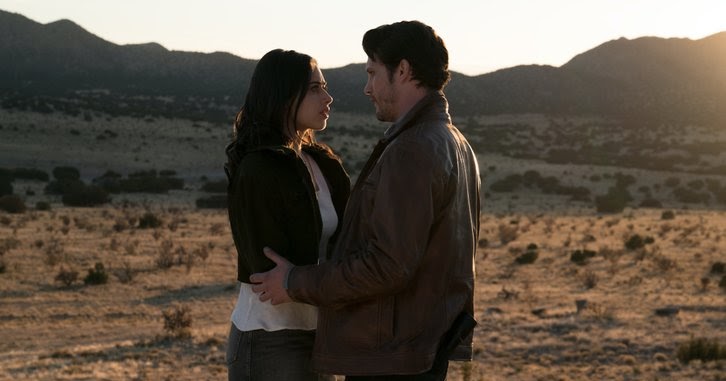 The January 29 episode “Tearin’ Up My Heart” mostly focuses on Liz (Jeanine Mason) investigating her high school crush Max (Nathan Dean Parsons) for what she believes to be her sister’s murder.

On the side, her other love interest, local doctor Kyle Valenti (Michael Trevino), helps her while being tracked by Commander Jesse Manes (Trevor St. John) for extraterrestrial information. As Kyle goes deeper into helping Liz, he becomes suspicious of Max, partially fueled by Kyle’s competing feelings for Liz. As far as CW shows go, this will have to constitute as conflict now.

Eventually, his searching draws the suspicions of his mother, Sheriff Valenti (Rosa Arredondo). After Kyle stole past files from his late father, she becomes more concerned about his activities with Liz and Commander Manes. While her concerns about Commander Manes are warranted with him being an obvious bad guy, her hang-ups with Liz have more to do with her background. As the child of legal immigrants, Valenti holds a grudge against Liz’s illegal immigrant parents for breaking the law. To everyone else, that sounds reasonable. To this show, that makes you "sound like a bigot."

Kyle: I was looking for Max Evans's file. We're in a kind of... Love triangle. Wanted to get some dirt on him, there wasn't any.

Valenti: Is this about Liz Ortecho? (Laughs softly) Kyle.

Valenti: I don't like her family. My parents struggled for years in poverty so that they could enter this country legally, because they believed in America. In freedom, in patriotism, in the law. And people who defy that law give us all a bad name.

Valenti: And you sound so naive. Rosa Ortecho killed those girls, and it tore this town in half. You were away at school, but your father nearly lost the election that year. Jesse Manes vocally supported some white candidate, and you know how this town loves to vote military.

Kyle: I thought Master Sergeant Manes and dad were friends.

Valenti: Jesse Manes doesn't have friends, Kyle. He has soldiers.

So now even supporting legal immigration makes you a terrible person? I wonder if the show feels comfortable telling that to every legal immigrant who unfortunately comes across this episode. Apparently, their years of struggle don’t matter since they actually followed the law. This series may want people to sympathize with illegal aliens, but they don’t share half the empathy for legal ones.

There’s even a bonus jab against Commander Manes for supporting a "white candidate." There’s no explicit reason why he was a bad candidate, just that he was white in Roswell. We should start getting used to these not-so-subtle images of the bad guy, because they’re starting to become more obvious. Kyle even remarks that one of Manes’ buddies includes Paul Ryan. We can only go downhill from here.

Three episodes in, and Roswell, New Mexico is still a mess of bad writing and even worse politics. The only question now is how deep we can go.