One could be forgiven for thinking Amazon’s Transparent couldn't possibly push the progressive banner any further. After all, the show is already about a family dealing with the fact that their father "Mort" now identifies as a woman named "Maura" and all that comes with the rest of the transition process. However, when it comes to most liberal ideologies, there are no borders. This new season includes the Israeli-Palestinian debate, yet another TV throuple, and an "historic first" - full-frontal transgender nudity! 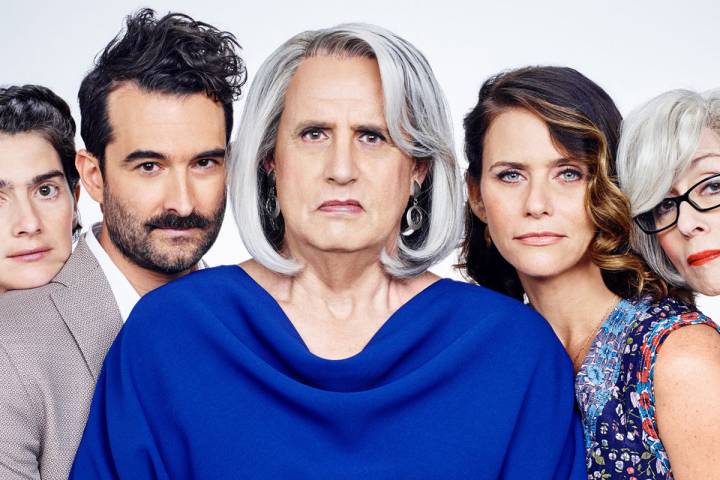 The September 22 fourth season premiere starts with Maura Pfefferman (Jeffery Tambor) traveling to Israel to give a talk called “Judaism, Cold War, and Gender” to discuss her book. The rest of the family decides to join the trip to explore their Jewish roots.

Through a series of frustrating events, Maura's daughter Ali (Gaby Hoffmann) meets a Palestinian social justice warrior named Lyfe (Folake Olowofoyeku) who shows her around Ramallah and introduces her to friends there who complain about checkpoints, not being able to travel freely and without permits. If they really wanted to portray "Palestine" in a more realistic light, they could have tried to host a “Judaism, Cold War, and Gender” talk with a transgender speaker in the West Bank or Gaza.

From there, Ali is quickly radicalized to spout out the usual pro-Palestinian arguments to her family. Her support of the Palestinians, which, as the show points out, is a made up word, becomes even more ridiculous as Ali then admits that she doesn’t “feel comfortable as a woman.” In fact, by the end of episode six, she's so unsure what she is that she's crossing over to the men's section of the Western Wall when the family pays a visit. Meanwhile, what would happen if she tried to go into the men's section of a mosque? Again, this seems like a pretty odd revelation to come to while trying to defend a region where LGBT rights are questionable at best, but at least the LGBT virtue-signaling plot gets in the way of Palestinian virtue-signaling for the time being.

In another even less palatable storyline this season, Sarah (Amy Landecker) meets with her kids’ old daycare teacher Lila (Alia Shawkat) and begins developing…let’s just go with “feelings.” Sarah, who is married, has been pretty open about her attraction to women as well, but this season takes a much broader twist: her husband gets in on it, too. Pretty soon, we’re treated to scenes of Sarah, Lila, and Len (Rob Huebel) having three-way sex, because this is where we are now in television. Even after we get some relief when these three try to casually end things between each other, they jump right back into the sex by the finale. The characters learn nothing, and the viewers learn less, but that doesn't matter when the point is to normalize anything that isn't marital monogamy between one "cis" man and one "cis" woman.

But now we’ve come to the height of the season, and I can honestly say that because that’s how the producers view the moment they are proud to call an "historic first." Transparent "treats" us to the first fully-nude shot of a transgender woman, through the character Davina (Alexandra Billings, a transgender woman in real life). As Davina turns over after a massage from her boyfriend, we as viewers see "her" real body with both breasts and a penis, scarring sensitive eyes twice as fast. Then…it’s pretty much nothing. Seeing Davina naked means absolutely nothing to the plot, it's gratuitous. But that was completely intentional for the show's "important" mission to normalize transgenders, according to show creator Jill Soloway:

For Soloway, the everyday breeziness of the scene was crucial: “It’s just life, living it, hanging out in your bed, getting a massage from your partner, turning over—just like life.”

Another transgender cast member, Trace Lysette, agreed, “I think that the really important thing was just seeing trans bodies." Lysette also gushed to Billings about the nude scene "how amazing it is to see you in all of your glory and how important that is.”

Sadly, I’m not surprised about this anymore. If we look back at all the esteemed winners of the Emmys this year, television shows are pretty much required to push the envelope ever further in being transgressive to gain critical acclaim. How else could showing a naked body be considered "important" and an accomplishment? When the body is transgender!

And that’s all the show cares about, teaching the rest of us about the LGBT community and normalizing it. The Israeli-Palestinian debate boils down to Ali’s sexuality, any semblance of a heterosexual relationship becomes a segue way into polyamory, and the brief, gratuitous showing of a naked transgender body is an important, historical moment to be celebrated.

They couldn't be more transparent if they tried.