The liberal media has waged a rather pathetic war against what they deem “fake news” since the November election, and Showtime’s Homeland seems quick to offer its support. Not content with simply parodying a right-wing media host, the episode is a little too eager to pretty much call him a liar. 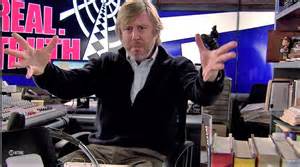 In the March 12th episode “Alt.Truth” (already off to a great start with that title), we once again see Alex Jones-parody Brett O’Keefe (Jake Weber) host his InfoWars-style show discussing the military son of the President-Elect Elizabeth Keane (Elizabeth Marvel). When footage allegedly surfaces of Keane’s son fleeing an active battle scene before his death, O’Keefe is quick to use it to try to take down who he calls “the most dangerous person to ever step foot in the White House.”

Except, oh wait, the footage is edited. You see, while Keane’s son appears to be running away from battle, the full video actually shows him attempting to rescue fallen soldiers. Just by cutting out the ending, the right-wing media personality turns a dead military hero into a coward, all for the sake of taking down a political figure.

Dar: Where on Earth did you get this?

O'Keefe: Well, this was the YouTube war, remember? This kid Rudy had a-- a camera on his helmet. He caught the whole Goddamn thing.

O'Keefe: This is where it gets good.

Man: We got two down!

Andrew: Out of the way! Get out of my fucking way!

O'Keefe: Meet Andrew Keane, the only son of the President-Elect.

[Keyboard clacks] Out of the way! Get out of my fucking way! [Explosion] Medic, get over here! [Gunfire continues] Frank, come on, man! [Indistinct shouting] [Gunshot]

Dar: I don't get it. He was trying to save their lives.

O'Keefe: Okay, this is something the boys put together. It's rough, but...

Frank: This the truth, okay? This is the truth that no one wants to hear. Men died, buddies of mine died, for nothing. If you take a look at the casualties his battalion suffered, 40 dead, 87 wounded, 'cause Andrew Keane only cared about his career and how many ribbons he can pin on his chest. And he didn't give a shit what he had to do to get 'em.

O'Keefe: But he did three tours. He must have taken some risks.

Rudy: We'd gone to search a warehouse in Sadr City. We had Intel it was a bomb factory. We had just gotten out of the vehicles when we got hit. It's like they were waiting for us.

Rudy: We were pinned down, taking fire. Rpgs, snipers. So we returned fire.

O'Keefe: Captain Keane, what did he do?

Rudy: There was a lot of noise--

O'Keefe: But he was there, right? You saw him.

O'Keefe: So what was he doing?

Rudy: He ran past me. He was shouting.

O'Keefe: He ran past you?

O'Keefe: Wait, you mean that he-- he was running away?

Rudy: Yeah, he was running. That's for sure.

Rudy: No, sir. He was the opposite of a hero.

O'Keefe: Then we wrap it all up with something like... "Cowardice -- it runs in the family." Like I said, it's rough, but I'm betting it'll put an end to her Gold Star mom routine.

Dar: Is this the only copy of the footage?

Dar: Good. Run it again, would you?

I’m sure that the liberals of the show are just patting themselves on the back for making the totally original claim that right-wingers are evil lying liars who lie. They're always claiming conservatives to be deceptively editing video. Because liberal media pundits have never been caught lying or promoting false information for their own views. Maybe before making up their own right-wing accusations, they should try to work on themselves first. At the end of the day, this piece of fake news says a lot more about the writers of Homeland than what they want us to think of people like Alex Jones.

It must be nice to have an imaginary world where the fake news can always come from the party you want. Until then, they could at least have the dignity to leave dead family members out of it, even if they are fictional.