In Chicago, there is a 1 in 33 chance that you could become a victim of a crime. Sounds to me like owning a gun would almost be a no-brainer to defend yourself. However, in the Chicago of CBS's Superior Donuts, gun ownership is still treated as a controversial event despite the hundreds of murders that occur yearly in that city. 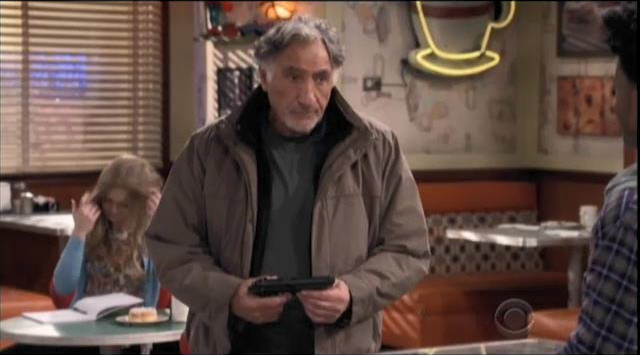 Franco: Where'd you get that?

Arthur: I went to a gun show. Man, do they hate Obama.

Franco: We never talked about you getting a gun.

Arthur: Hey, come on, come on, you're the one that wanted me to be safe from all the criminals, right, huh? So now I got a gun, now I'm safe.

Tush: Mind if I take a look at that? Looks like a Beretta 92fs, double-action, semiautomatic, nine-millimeter. 15-round magazine. Yep. You're definitely gonna blow your head off.

Franco: How do you know so much about guns?

Tush: I used to work in a liquor store.

Fawz: Wait until Jerry finds out that Arthur has a gun.

Fawz: My scarecop. I like to imagine his life before he met me. You know, he started out as a menswear mannequin, but became a cop because he wanted to make a difference. Now he's two weeks from retirement, and, uh... I have a lot of down time at the dry cleaners!

Arthur: So why do you want to take my gun away?

Maya: Maybe because studies prove that a gun in the home poses a greater threat to family members than to intruders.

Tush: That's true, but in states where gun ownership goes up, violent crime goes down.

Franco: Who cares?! Like, 100% of Arthur owns a gun right now, which makes me a million percent freaked out.

Fawz: But why? Now you're protected. If a bad guy comes into the shop, Arthur can just boom-boom, boom-boom! That's shooting, not dancing.

Franco: Wait, do you own a gun?

Fawz: Guns. And also no.

Franco: This is Chicago, okay? Yeah, yeah. I knew a lot of guys who thought having a gun would make them feel safer, and it didn't. It just got them shot. Randy, James, we got a situation. Arthur bought a gun; you got to stop him.

DeLuca: Is it registered? You got a permit?

DeLuca: Well, then I can't stop him. And the way crime's been lately, it's not a half-bad idea.

Franco: So you're just cool with this?

James: I don't know. As a police officer, I've seen way too many people hurt themselves with their own gun.

DeLuca: He shot himself.

James: I shot myself.

I give points to the show for actually arguing a little for the side of gun ownership in a city like Chicago, not to mention the buried argument that higher gun ownership correlates with lower crime rates. But that doesn’t change the undeniable tension against owning a gun that still permeates mainstream entertainment. Owning a gun isn’t a right so much as a questionable decision even though millions of safe gun owners live in the country.

The episode continues painting the idea of owning a gun as too risky as Arthur proves to be a lousy shot, and a walk through the neighborhood leads to him pointing a gun at Franco in the early hours. Finally, the episode tops the whole thing off with a heart-to-heart that has more sap than substance when Franco says that he has friends who have been hurt by guns, leading Arthur to give up the gun.

At the end of the day, the show can’t move past the idea that guns are scary, owning a gun is scary, and knowing someone who owns a gun is scary. One would think someone breaking in in the middle of the night would be scarier, but in this Hollywood ending, Chicago is somehow made safer by disarming a donut shop owner. If only that were true in the real world.