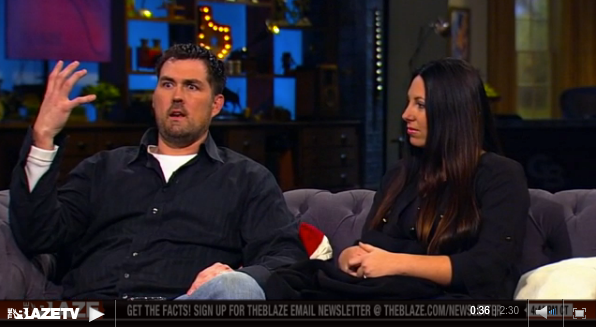 "Lone Survivor" Marcus Luttrell is leading the charge of veterans who are tired of politically correct anti-gun, anti-uniform policies at military facilities.

After Department of Defense Secretary Ashton Carter approved the decision to have recruiters not wear their military uniforms, Luttrell took to Facebook to criticise the decision.

“I have to tell y'all I laughed out loud, if anyone thinks for one second a Marine is gonna take his uniform off because he cares about his safety or is scared of some shitbag walking in off the street and trying this again,” Luttrell wrote on Facebook July 20 in response to Chattanooga. 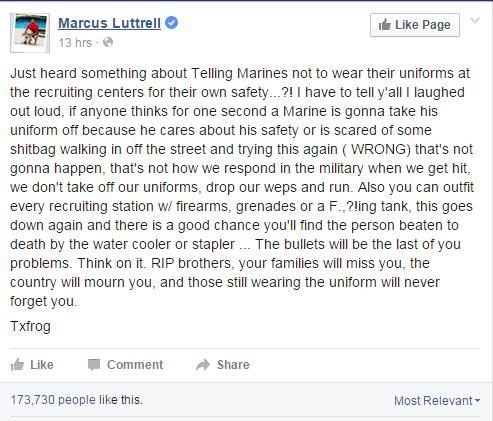 He continued to say that it didn’t matter what protections were put in place, these kinds of attacks would happen again, and guns would be “the last of you [sic] problems.”

Military recruitment offices, like the one in Chattanooga, are "gun-free zones."

Luttrell, a former Navy SEAL, first rose to fame for as the only survivor of a special mission in Afghanistan against the Taliban in 2005, for which he earned the Navy Cross and Purple Heart.

Luttrell isn’t shy about sharing his conservative viewpoints. In his best-selling book Lone Survivor he made comments defending the military and bashed the liberal media for its spin on the war in Iraq and Afghanistan.

Last year, Luttrell went head-to-head with CNN’s Jake Tapper, where Tapper stated "I don't mean to disrespect in any way but it seemed senseless, all of these wonderful people who were killed for an op that went wrong."  Luttrell was having none of that. He retorted:

“We spend our whole lives defending this country so you tell me because we were over there doing what we were told to do was senseless and they died for nothing?”

Luttrell isn’t the only veteran criticizing the anti-gun policies that left the four Marines and one Navy officer exposed to danger in Chattanooga.

Former NYPD Detective Harry Houck told CNN on July 16 that, as a Marine vet, he was very upset that “[these Marines] weren’t able to protect themselves at the time this occurred.” He urged, “We need people that are armed.”

A Change.org petition makes that same argument, saying that U.S. Armed Forces members should be allowed to carry concealed firearms for protection.

Marine Sgt. Dakota Meyer, who received the Medal of Honor in 2011, also shared his thoughts on The Kelly File July 20.

“What we need to do is we need to give them the opportunity to be able to carry their own firearms,” Meyer said, speaking of arming servicemen. He continued to say, “They tied our hands over in Iraq and Afghanistan with rules of engagement, are they going to do it over here too?”

Meyer went on to chastise the political correctness surrounding radical Islam, saying, “When are we going to stand against it?”

Sgt. Meyer continued his thoughts on Facebook after the show, saying that “government bureaucracy half steps” were a “pathetic attempt to give the public the impression that security measures [exist].” 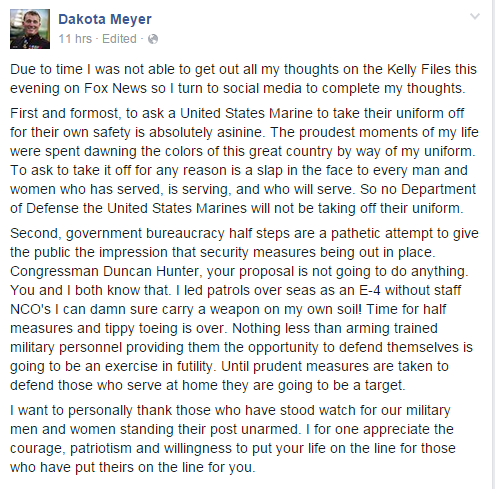