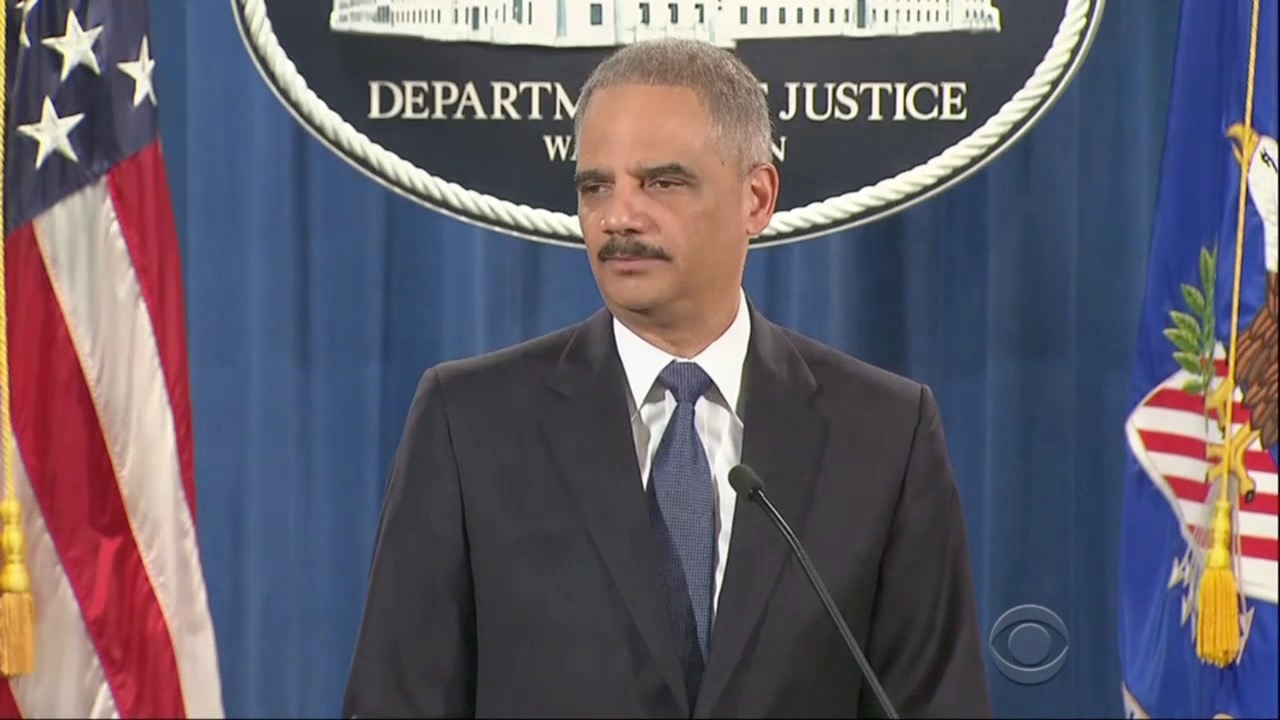 “Hands Up, Don’t Shoot” has been the rallying cry of Ferguson protesters since officer Darren Wilson fatally shot Michael Brown on a Missouri street last August. Brown, the “gentle giant,” was shot while trying to surrender or de-escalate his encounter with Wilson. It was an article of faith on the left, and the three networks used the phrase 140 times in their coverage of Ferguson.

Now, the DOJ report and Attorney General Eric Holder have admitted that the catch phrase was based on false witness accounts. None of the networks apologized or admitted their own reporting spread that false narrative. Instead, they focused on DOJ’s assertions of racism in the Ferguson police department.

In a press conference yesterday, AG Holder admitted that a false account of events had mysteriously gained popularity with the public, but he wouldn’t admit the media had some small part in this. “I recognize that the findings in our report may leave some to wonder how the department’s findings can differ so sharply from some of the initial, widely reported accounts of what transpired,” he said, “It remains not only valid – but essential – to question how such a strong alternative version of events was able to take hold so swiftly, and be accepted so readily.”

Er, it might have something to do with people in the media and government (Holder very much included) being all too eager to believe, or at least cynically parrot that “alternative version.” For example, the “Hands Up, Don’t Shoot” phrase was mentioned 34 times by NBC, 51 by ABC and 55 by CBS from August 9, 2014 to March 3, 2015. 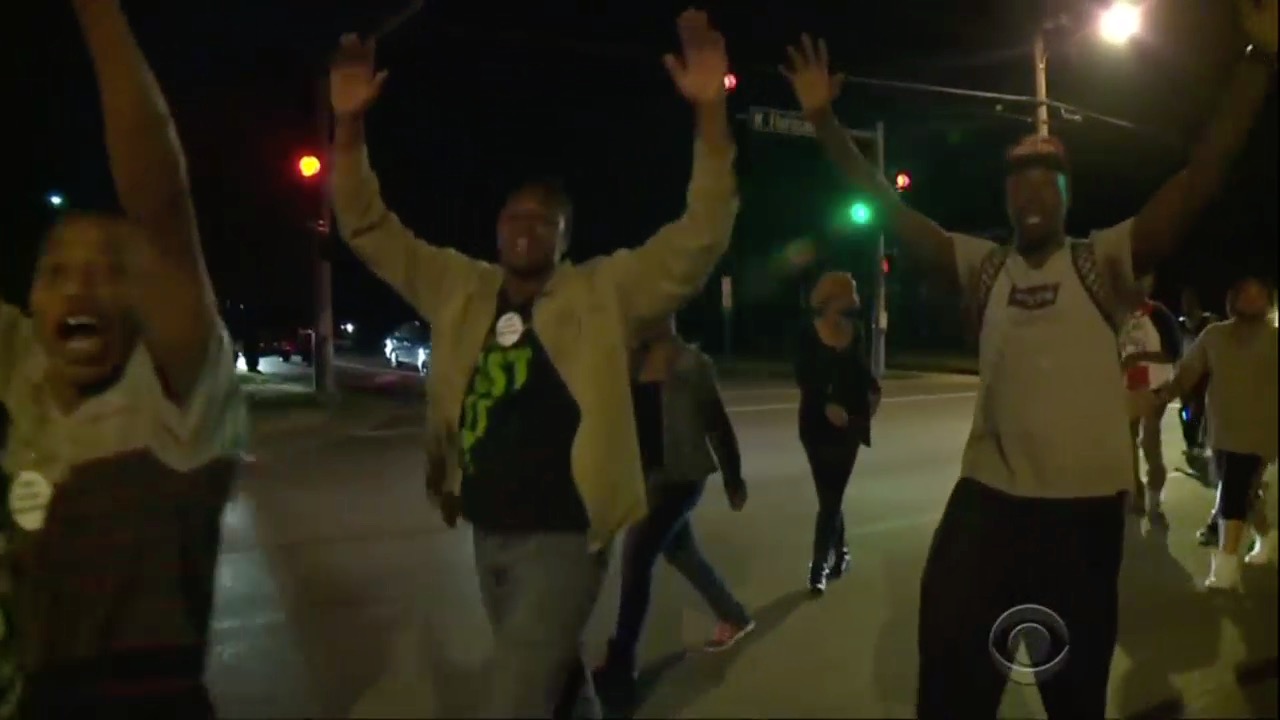 But only the CBS Evening News, which gave 42 seconds to clearing Wilson, noted that there was “no credible evidence Brown had his hands up attempting to surrender.”

Passive language and skeptical tone characterized the report from anchor Charlie Rose, who said the DOJ “found no evidence to disprove Wilson's contention he acted in self-defense.” Reporter Mark Strassmann also called Brown “an unarmed teenager” during the segment, which spent another minute and 20 seconds discussing the racial tensions in Ferguson and hyping “racist emails” found on officers’ computers. The segment was immediately followed by a civil rights poll.

ABC’s World News Tonight was even worse. Anchor David Muir teased the segment by not even mentioning that Wilson was cleared by the DOJ or that the protesters were wrong, but instead leading with the racist emails, saying: “Breaking tonight: the Ferguson police department, coming before the cameras at this hour, responding. After the justice department reveals racist e-mails, and alleged excessive force.” In the nearly two minute long segment, just five seconds were given to the fact that Wilson was cleared by the DOJ. The rest of the segment was devoted to the emails.

Nowhere in the two minute, 20 second long segment did anchor Lester Holt or reporter Ron Allen find time to mention that the report also found the “hands up, don’t shoot” narrative was a lie.

It’s not just the broadcast news that was complicit in spreading false information and adding fuel to the fire in the Ferguson case. Shockingly, a CNN panel even participated in siding with the protesters by hosting their own, “Hands Up” protest after the grand jury found Wilson not guilty of any criminal charges in December. 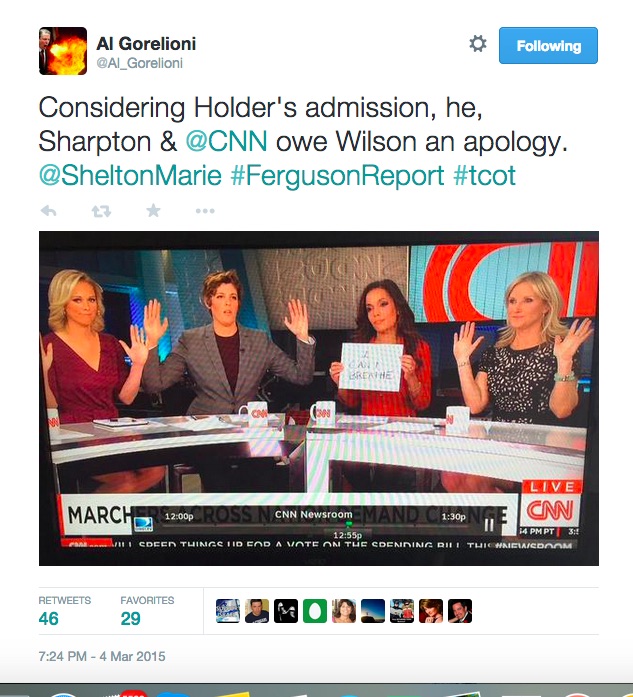 It doesn’t seem to matter to the media that no jury, judge, or government office has found anything showing Officer Wilson was not acting in self-defense. The media and the Obama administration will continue to aid the race-baiting narrative from the left as long as no one holds them accountable.