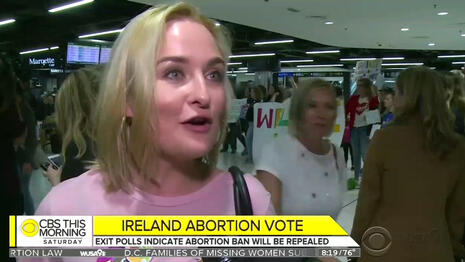 Women matter, but only if they’re already born – at least according to the networks on Ireland’s recent abortion vote.

On Friday, May 25th, Ireland voted to repeal the country’s Eighth Amendment that banned abortion. In many of their segments, the broadcast networks (ABC, CBS, NBC) framed the repeal as a win for “women’s rights” against a “highly restrictive” law.

Since 1983, Ireland’s Constitution included the Eighth Amendment that values both the life of the mother and the life of her unborn child. It reads:

But that didn’t stop the networks from reporting on the repeal as a win for women during their morning and evening news programming.

During CBS News Sunday Morning, anchor Lee Cowan decided that “the outcome of the vote is considered a historic vote for women’s rights” on May 27. A day earlier, for the CBS Weekend News, Saturday anchor Reena Ninan added that “In Ireland, it's being called a quiet revolution and a victory for women.”

For ABC, weekend anchor Tom Llamas reported on the “historic vote” with the “final tally showing overwhelming support for women’s reproductive rights” during World News Tonight on May 26.

That reaction might be because some anchors and correspondents only focused on the reaction of abortion supporters – looking past pro-life voices who would call this vote a loss for women, especially for those in the womb.

According to the networks, the abortion ban was “restrictive” and “strict.” (Not, for example, “freeing” for the unborn.)

On the morning of the 25th, CBS anchor Norah O’Donnell anticipated the “historic referendum” that “could relax that country’s strict anti-abortion laws.” That same day, for the CBS Evening News, anchor Jeff Glor accused Ireland of having “some of the world's most restrictive abortion laws.”

Also for CBS, on May 26, anchor Dana Jacobson deemed the Eighth “one of the world's most restrictive abortion bans” during CBS This Morning. In the same segment, foreign correspondent Jonathan Vigliotti concluded that the “historic vote to legalize abortion shows an overwhelming desire for change in the nation.”

For NBC, anchor Craig Melvin called the repeal a “stunning turnaround” on a “highly restrictive abortion law” during Today on May 26. That evening, for NBC Nightly News, anchor José Díaz-Balart introduced the repeal of the “country's strict ban on abortion.”

In the United States, women leading the pro-life movement disagreed in statements released to the press (shortened below for brevity).

“We are deeply saddened to learn that many Irish people voted against love and life by repealing the 8th amendment. Americans know from experience that there will be many grave and irreversible consequences to this decision, including the loss of precious lives. A study released this week shows that legalizing abortion greatly increases the number of children whose lives are terminated in the womb. Though they are the first, unborn children are not the only victims; abortion harms mothers too.”

“While other Western nations including the United States acquiesced to the extreme abortion lobby, Ireland has been a shining beacon of hope for its strong defense of unborn children and their mothers. Irish pro-life advocates have correctly warned that repealing legal protections for the unborn opens the door to abortion on demand, just as Roe v. Wade did in the United States, which has some of the world’s most permissive abortion laws. We are one of only seven nations that allow abortion for any reason up to the moment of birth. We had dearly hoped the children of Ireland would be spared a similar fate.”

“Ireland will now join that sad community of nations who throw away irreplaceable human beings through abortion on demand. Clearly the abortion industry and their political and cultural allies put preborn life in the crosshairs, working to push this tragic conclusion to all efforts to protect both mother and preborn child. Still, it’s a tragedy that the Irish people did not learn from our mistakes and have failed to provide pro-life protections in the law.”

“Today, the AUL legal team is saddened that the people of Ireland have paved the way for abortion on demand in their country. AUL offers our support to the pro-life people of Ireland – we continue to stand with you and thank you for your valiant efforts to defend life.”

“The global pro-life movement is deeply disappointed to see Ireland repeal legal protections for the unborn but unfazed in our resolve to continue fighting for the right to life for all people. The Repeal the 8th Campaign was a classic example of ideological colonization: it was imported and funded by extreme, pro-abortion special interest groups from outside of Ireland who could not tolerate the reality that Ireland proved that women don’t need abortion to flourish and thrive. Ireland has one of the lowest maternal death rates in the Western world and a robust economy; abortion was not necessary to create an egalitarian, pro-woman society. Pro-lifers are disappointed, but confident we will one day overcome and put to rest once and for all the patriarchal lie that the only path to equality with men involves the violent killing of our own children.”