Mom of Kid with Down Syndrome Tells 'The View': ‘We’re Not Sorry’

In today’s media climate, applauding mothers of kids with Down syndrome is revolutionary. In 2018, writer after writer has supported aborting babies with the diagnosis. But just in time for Mother’s Day, The View is celebrating the lives of children with Down syndrome – and their moms.

On Thursday, The View shared the story how one mom’s life changed after giving birth to a daughter with Down syndrome. The show invited ER nurse Cara Armstrong and her 7-year-old daughter Mia on air. While Cara initially worried about her daughter’s diagnosis, today she says Mia shows her a “different kind of perfect.”

But millions are already familiar with little Mia. That’s because she starred in a viral Teleflora Mother’s Day ad, which boasts more than 7 million YouTube views since April 30. In the one-minute video, Cara revealed that when Mia was born, the doctor responded sympathetically with an “I’m so sorry.” She wasn't sure how Mia would fit into the “perfect” family she originally envisioned – and she worried she wasn’t the “right woman for the job” of Mia’s mom.

But today, Cara stressed, Mia is the “glue that holds our family together” and the “light of our lives.”

“I think motherhood is about embracing who they were created to be,” she concluded. “I was given this daughter to change my heart and to show me a different kind of perfect.”

And if Cara’s words weren’t clear enough, Mia demonstrated her loving and joyful nature on The View as she sat between her mother and big brother Jack. Co-host Sara Haines immediately took a liking to Mia.

“I got greeted by Mia with a full blown hug and then an order to Jack to hug me too,” Haines said. “So she’s my kind of people.”

But Mia didn’t just hug Haines. As her mother talked, Mia told Jack “I love you,” while giving him little kisses and hugs throughout the show. Mom explained that “she loves her big brother.”

Haines admitted to Cara that her “story really struck a chord with so many of us because I think everyone has an idea of what a perfect family will look like.”

But Cara’s idea of perfection changed after she discovered Mia might have Down syndrome at her 11-week ultrasound.

“A doctor just bursts through the door of the treatment and said the three words that we hear over and over again over the last seven years [of Mia’s life], and those three words were, ‘I'm so sorry,’” Cara remembered.

“What I want the world to know is that we're not sorry,” she urged.

“It was a definitely time of fear,” she added, but she later discovered that “Down syndrome is not something to fear, as a matter of fact. In our family, it's something we're very proud of and it’s something that we celebrate.” 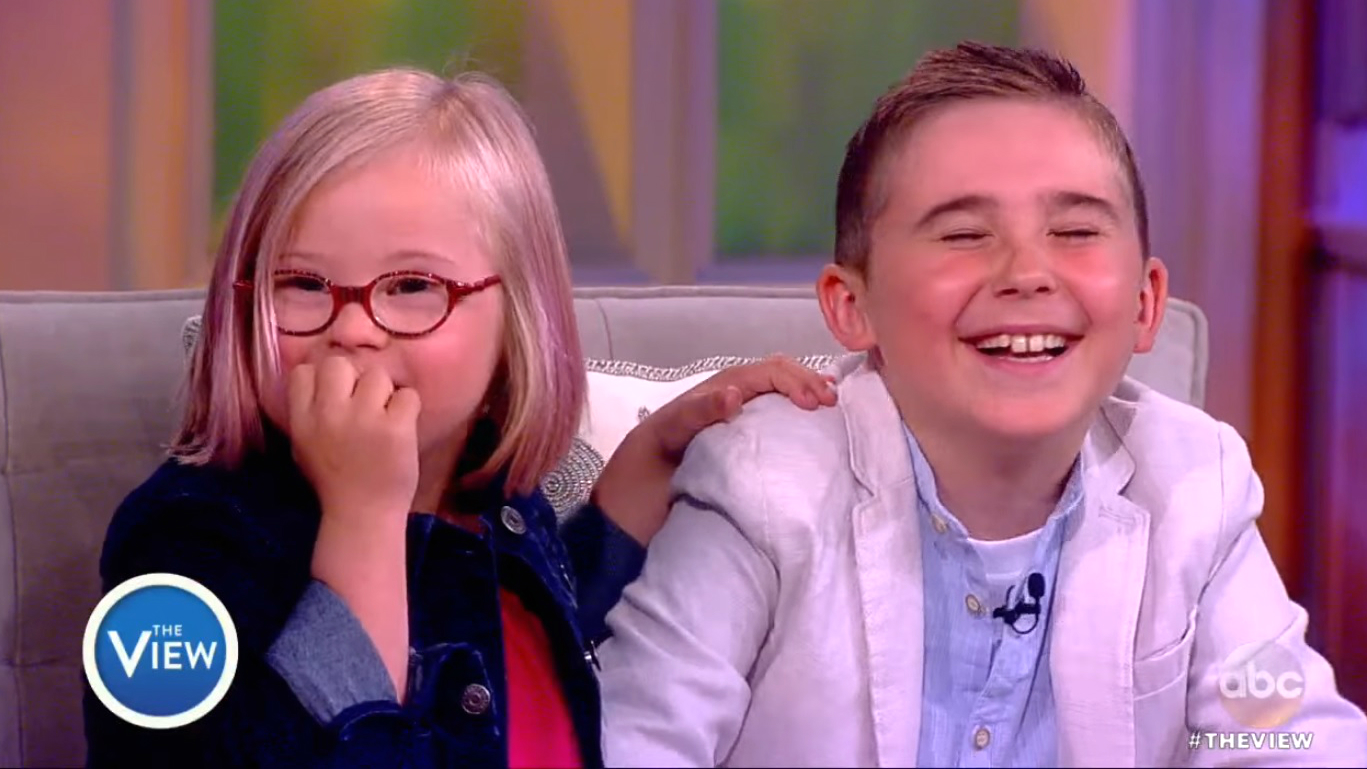 While Mia has “regular intelligence,” she also has an “emotional intelligence that I have just never encountered before,” Cara continued. “She knows what we need when we need it. She loves us the way that we need to be loved.”

Like Haines, co-host Sunny Hostin called Mia “spectacular.” But she turned her attention to Jack for a moment to ask him what makes Mia “so special.”

The audience interrupted him with applause – but not before he hinted that his family believes in God.

For Mother’s Day, Hostin also asked Mia, “How much do you love your mom?”

Mia opened her arms as wide as she possibly could and smiled.

It was a remarkable move for The View to highlight the beauty of a child with Down syndrome, whether the show realized it or not. Last year, The View donned “pussy hats” in support of the pro-abortion Women’s March. The View crew has also called former presidential candidate Dr. Ben Carson “pathetic” for speaking out against abortion and slammed actor Kelsey Grammer for wearing a pro-life T-shirt. Co-host Whoopi Goldberg has also declared that abortion is legal because people are tired of “hanger” and “Clorox” abortions and insisted that there was “nothing” in the Bible about abortion.