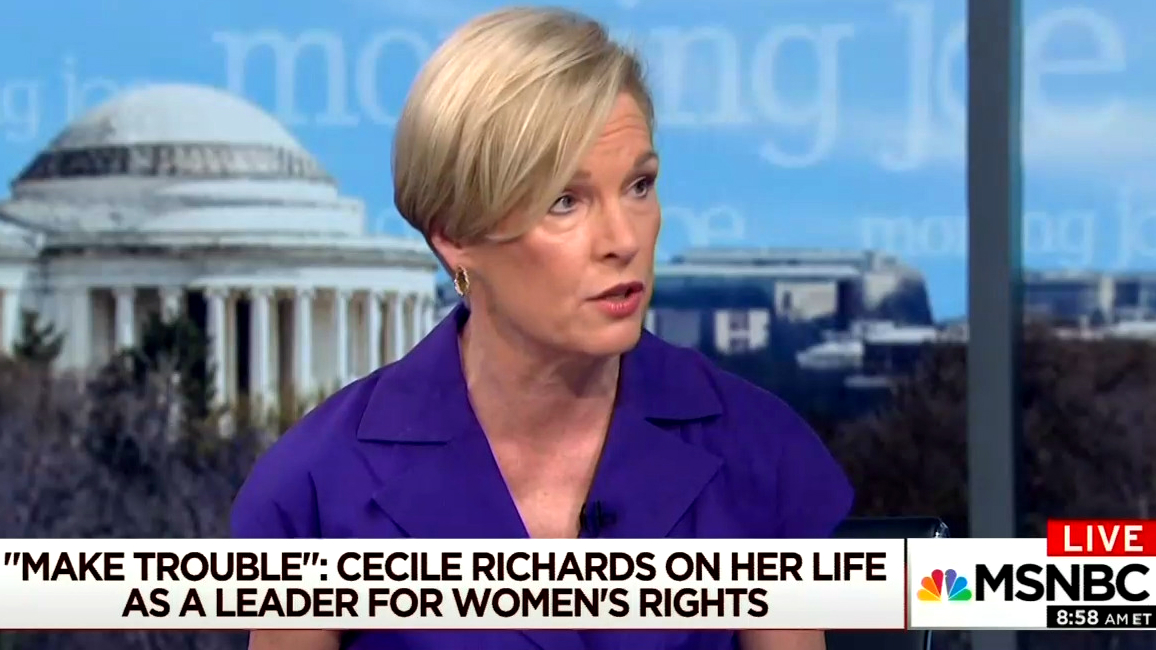 While many in the media are asking Cecile Richards the same questions during her book tour, MSNBC co-host Joe Scarborough is breaking the trend by asking about pro-life women.

On Tuesday, Planned Parenthood President Cecile Richards appeared on MSNBC’s Morning Joe to discuss her new memoir, Make Trouble. Richards’ book comes a month before she plans to step down from her position after serving for 12 years.

“The timing of your book could not be more perfect, Cecile,” co-host Mika Brzezinski gushed. “I feel like there is such a hunger for this message.”

She commended Richards for the “incredible stories about your mom,” former Texas governor Ann Richards. “What are you hearing on the road from women as to what strikes them in this book?” Mika praised.

Scarborough asked an actual question. “What can somebody who's pro-life learn from this book?” he wanted to know. “Because obviously, there are a lot of pro-life women out there running [for office] as well.”

That’s a question Richards doesn’t often hear. But she had an (non) answer ready.

“I think a universal message is that women can't wait until it's their turn,” she responded. “I really do think that's true. I mean, we now see women in the United States Senate, 23 women are record numbers. But still, we're debating over basic health care issues for women.”

Basic health care issues … like abortion? But Richards suggested she’s ready for pro-life women to run – if they keep their views to themselves.

“I think a lot of this book, too, is really, Joe,” Richards continued, “about the fact that you can be pro-life and you can also understand that that isn't something necessarily that government should be deciding for every woman in America.”

In the middle of the interview, co-host Willie Geist gave Richards the chance to answer a popular media question for her: “A lot of people are wondering if you're stepping away from Planned Parenthood to get into elected politics yourself. Is that something that’s on your mind?”

It's *almost* like Planned Parenthood is giving the MEDIA talking points... What say you?