Ellen just called her the “mother of our country.” And, now, Jimmy Kimmel is saying Oprah is the “best president we’ll never have.” Don’t expect the talk to end either, as Oprah’s movie tour continues.

On Thursday evening, Oprah Winfrey appeared on Jimmy Kimmel Live! as the first guest to promote her role in the upcoming film, A Wrinkle in Time. But the show focused first on Oprah’s rumored run for president.

To welcome her on set, host Jimmy Kimmel introduced Oprah as an “academy-award recipient,” “legendary broadcaster and humanitarian,” and the “best president we will never have.”

Before discussing anything else, Oprah addressed rumors about running in 2020.

“I am definitely not running for the presidency,” she said, as the audience responded with boos. “You give a speech and then you sit down, and you have surprisingly started a run for president” she said, referring to the 2018 Golden Globes.

Kimmel prompted, “You never imagined that would be people's reaction, did you?” She didn’t.

“I was kind of first thrown by it,” she said. “It's a humbling thing to have people think that you can run the country … And so, I'm the kind of person who tries to listen to signs. I think, well am I supposed to run the country? I don't think so.”

As for Kimmel, he interjected, “I feel you already ran the country for about 13 years.” He also pointed to Oprah’s longtime boyfriend, Stedman Graham, who “made this into a much bigger situation.”

Following her speech, Stedman told the Los Angeles Times that “it’s up to the people” and Oprah “would absolutely do” the presidency. But Oprah said that Stedman mistakenly thought he was answering “Would she make a good president?”

“He would never say I should run,” she added. 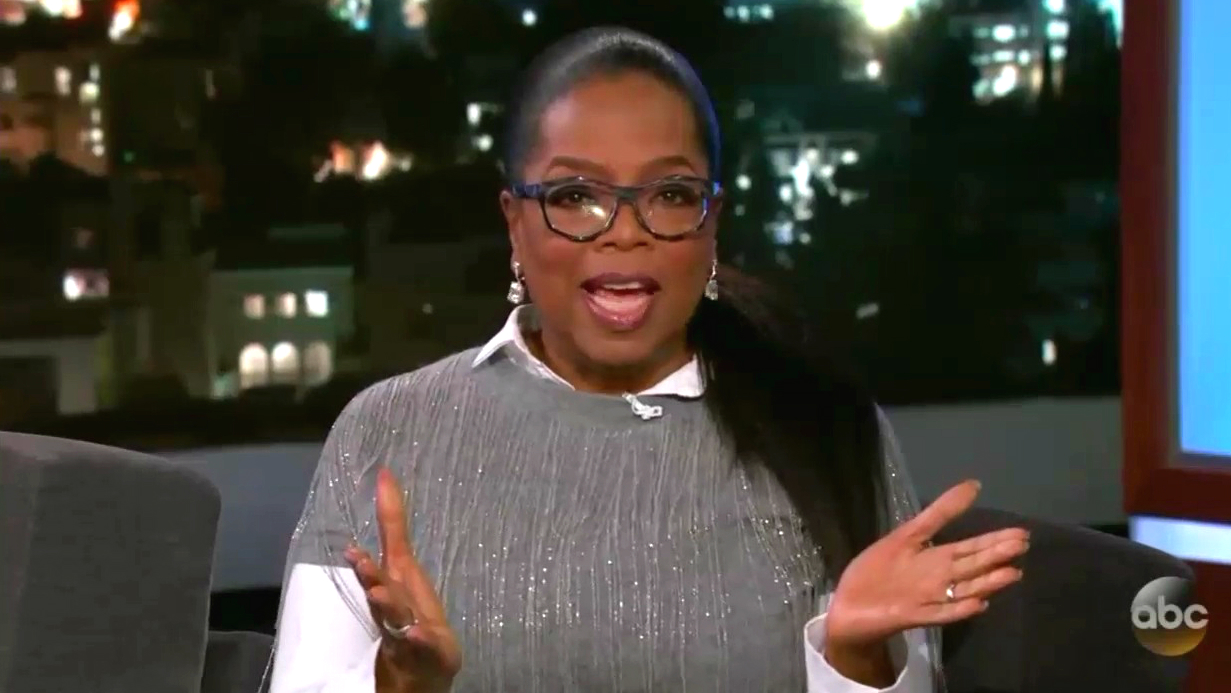 While Kimmel didn’t “want to dwell on the presidency,” he also asked her about President Trump’s Feb. 18 tweet after she appeared on 60 Minutes.

“Just watched a very insecure Oprah Winfrey, who at one point I knew very well, interview a panel of people on 60 Minutes,” the president tweeted. “The questions were biased and slanted, the facts incorrect. Hope Oprah runs so she can be exposed and defeated just like all of the others!”

Oprah said that when she found out about it from Wrinkle in Time director Ava DuVernay, “I went, ‘Oh no, no, really?’” But “not [for] a second” did she think of tweeting back a response.

“You don't win by meeting any kind of negativity head on,” she added.

After they talked about her upcoming movie, Oprah concluded by wishing Kimmel was her brother.

“I said to your producer, I wish you were my little brother because I think you're like America's little brother,” she said. “And every time you're on and you say something profound or funny or do one of these great skits with kids, I go, ‘Aw, that’s Jimmy.’ I’d just love to say ‘that's my little brother, he was always like that.’”

Kimmel responded, “I accept your sisterhood.”

Oprah’s possible run has been lauded by many in the media. In January, The View co-host Joy Behar went so far as to call Oprah “Trump’s worst nightmare.”