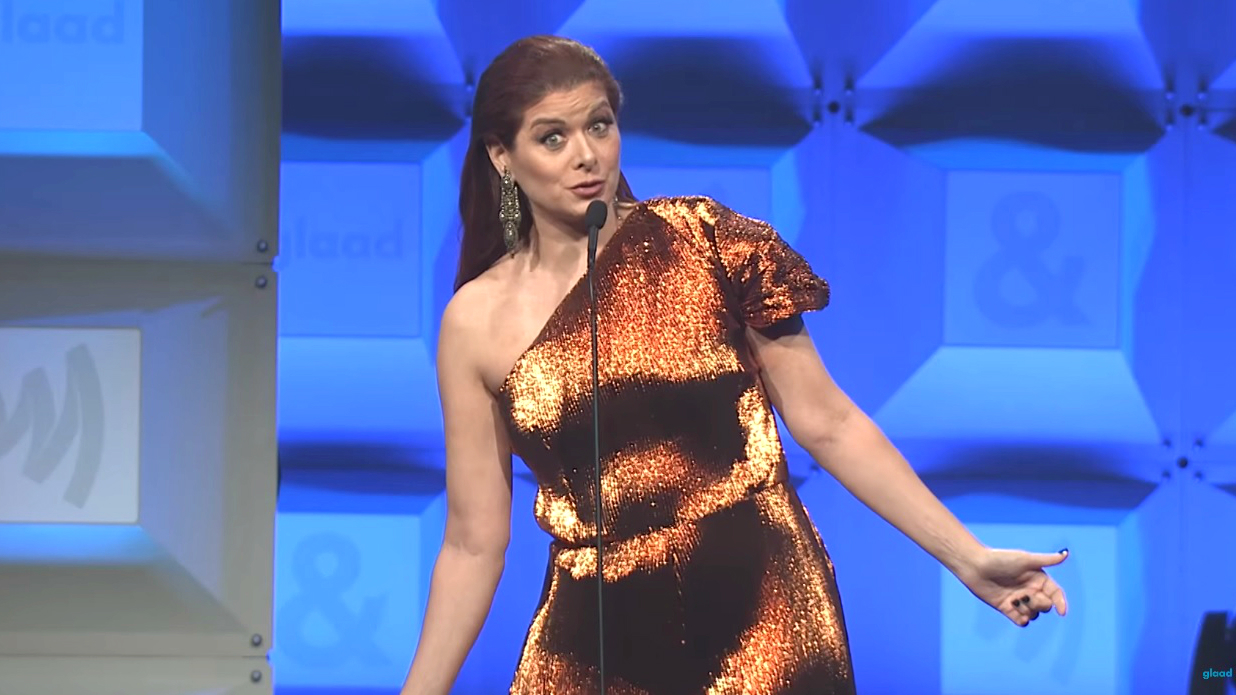 The media are getting political – and aren’t afraid to boast about it. At least when it comes to President Trump.

While accepting her “Excellence in Media Award,” Messing (Will & Grace) demanded the media play a larger role in advocacy.

“Entertainment and news media shape not only culture, but also decisions made in courtrooms, classrooms, and yes, even voting booths,” she said. “The country needs excellence in media.” That’s because, she added, after announcing the revival of Will & Grace, “It is time to make America gay again!”

“Someone’s got to take down ‘Mother Pence,’” she said of the vice president, a “low-hanging fruit.” As far as the president, Messing called Trump “a very bad and very orange white man in our White House.”

But she saved her “direct appeal” for Ivanka. “It is not enough to simply say that women’s issues are important to you,” she began before adding:

Ivanka, you can change the lives of millions of women and children just by telling your dad stories about real people who are suffering. Don’t let him separate immigrant mothers from their American-born children. Don’t let him take healthcare away from women who need it. Don’t allow him to make trans kids like Gavin fight in court for their basic human dignity. Ivanka, please, please, stop blindly defending your father and start defending what you say you believe in.

But Messing didn’t let that keep her from partying. At one point, she had an odd moment where she “tweaked” the nipples of a performer from the band DNCE.

You know, if I was in @DNCE, I would run over to @DebraMessing at #GLAADawards and get my nipples tweaked too. I mean pic.twitter.com/nhynWoBuKO

She wasn’t the only to talk politics. As the evening’s host, Ross Mathews asked Messing if she could “bring back Obama” in addition to Will & Grace. After remembering that the awards ceremony took place where President Trump delivered his election night victory speech, Mathews lit sage on fire to “sage the room!” and clear the air.

We’re claiming back this ballroom from @realDonaldTrump! #glaadawards pic.twitter.com/hF8FH91Kvf

Rosie O’Donnell, as a joke, wrote a text to Trump on stage, “'F–k you, Donald. From the gays.' Sent.” While, at another point, Billy Porter criticized the administration and demanded “resist!”

For an idea of who else showed up at the event, here are the 34 media awards presented by GLAAD: