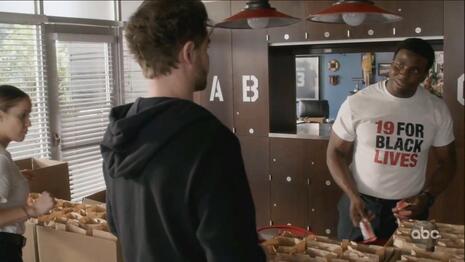 The penultimate episode of Season 4 of ABC’s Station 19 aired on May 27. In “Say Her Name,” the death of Breonna Taylor is the source of angst and anger among the firefighters and first responders.

The crew is shown putting together bags for distribution at a medical booth they plan to set up at a BLM protest in Seattle. As they work, many sport t-shirts that read “19 For Black Lives.” Captain Maya Bishop (Danielle Savre) explains they cannot wear the shirts while working the booth at the protest, they have to wear them under their Seattle Fire Department uniform shirts. She also tells them she is trying to find a way to express the station’s support for the marchers without causing friction with department leadership.

The firefighters are in full activist mode since the death of George Floyd and the protest marches began. Some of them begin retelling American history in a fashion that would make Howard Zinn proud. One said that policing began in America “with angry white guys using violence and intimidation” to prevent slaves from escaping. Another made a connection between the 13th Amendment and slavery. “Did you know the 13th Amendment abolished slavery except as punishment for a crime? Like, black people would get arrested, right, on, like, trumped up charges so they could get convicted and then used for free labor.” The point being made is that America was founded on racist grounds, as is taught in Critical Race Theory.

Adding to the tension, Victoria Hughes’ (Barrett Doss) parents’ restaurant is set on fire by rioters. The firefighters have a longer than normal response time due to the streets being clogged by protesters. Her parents are brought outside to safety and Victoria becomes angry that they will not talk about the marches or riots or any of the drama in the streets. Her mother is white and her father is black. When the conversation is had, Victoria learns that her mother’s family disowned her when she married a black man. And Victoria’s mother talked about being the mom of a black daughter. Victoria sees herself in Breonna Taylor’s place – a black female first responder.

Vic: What is all this?
Lenya: Your accomplishments. Your professional accomplishments. The other stuff is over there.
Vic:  It's like my whole life's in here. I've never even seen some of these.

Lenya: Well, how would you? You're hardly even here anymore, and when you are, you just grab your pierogies and go. And since your dad and I spend all this time without you, we brought as much of you as we could here. I watched an interview with Breonna Taylor's mother. Couldn't sleep for a week. I know I could never truly understand what it's like for you to navigate this world as a Black woman, and I wouldn't even pretend that I could. I've experienced even nothing remotely similar to this, but what I do understand is being the mother of a Black daughter. You don't think I know you could've been Breonna Taylor? I'm your mother. This is what I've always known. I've known since you were five, and a cashier accused you of stealing the candy, the one I just bought you. I've known since you were 11, coming home from school, crying because the girls at school wouldn't stop touching your hair. I've known since before you were even born, when my parents kicked me out of the family for marrying a Black man and refused to meet my perfect little girl.

The media come to the scene and ask how Anthony and Lenya feel about rioters burning their business. Lenya absurdly says that it is worth losing the business to a fire if justice is served to those who kill black people. Even for this show, that was over the top.

The season finale is next week. The crew at Station 19 has channeled their inner social justice warrior to forge a divide between cops and firefighters, as well as joined in on marching with BLM protesters so far this season. We’ll see how they top that to end the season.

You can fight back by letting these advertisers know what you think of them sponsoring such content – Comcast, Microsoft, and Target.