Liberal Doctor on ABC Medical Show: ‘Right Is So Intolerant’, Trump Voters 'Should Be' 'Vilified' 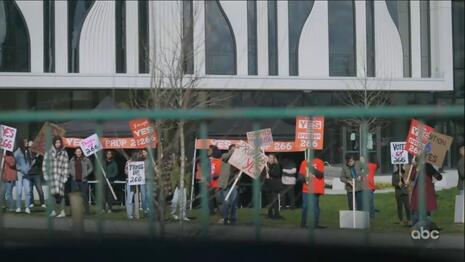 ABC’s The Good Doctor is back with some bad political posturing.

The April 26 episode, titled “Waiting”, takes place after a protest against an unnamed proposition turned violent with two young boys hit with bullets.

During the surgery on one of the boys, some confessions shocked Dr. Claire Browne (Antonia Thomas). A liberal black doctor, she began to rant about the “intolerant” right. Two other doctors in the operating room took her to task by confessing to being an NRA member, in the case of Dr. Marcus Andrews (Hill Harper), while Dr. Asher Wolke (Noah Galvin) confessed that he voted for Trump in 2016.

Claire first tried to laugh off the confessions but soon learned that Dr. Andrews, a black doctor, purchased a handgun for himself and his wife after being mugged at gunpoint one night after dinner at a trendy restaurant in a shady part of town. He joined the NRA, too. Asher, a Jewish doctor, said he voted for Trump because he liked his position on Israel. He never told anyone because he knew he’d "be absolutely vilified." Claire responds, “As you should be, especially you.”

Claire: It’s so sad that people can’t express their views peacefully. The right is so intolerant of political differences -- any differences.

Andrews: I think there's some intolerances on both sides.

Claire: Oh, like there are good people on both sides?

Andrews:  What if I told you I belong to the NRA?

Claire:  I'd think you were saying that to make a point.

Andrews:  About five years ago, my wife and I went to a very trendy restaurant in a very shady part of town, and on our way back to the car, we were mugged at gunpoint. The next day, I bought us both handguns. I'm a card-carrying member.

Asher: I voted for Trump.

Asher:  I'm serious. I liked his stand on Israel. But I've never told anyone because I'd be absolutely vilified.

Claire: As you should be, especially you.

Did you notice Claire’s reference to the debunked quote alleged to have been made after the Nazi protest in Charlottesville about good people being on both sides? Trump is no longer in office yet the Trump deranged left cannot let him go.

Later, in the operating room, Claire and Asher resume their conversation. Claire exposes herself as the intolerant one who feels her friendship with Asher is endangered now because she knows he voted for Trump – once.

Claire: You actually voted for Trump?

Claire:  And then what? You -- You -- You suddenly discovered he was exactly who he said he was?

Claire:  This kind of changes how I feel about you.

Asher: What does that mean? You're saying you don't respect me? We can't be friends because of a vote?

Claire: It is more than a vote.

Asher: Yeah. It's a fundamental right that I exercised. This kind of changes how I feel about you. If I can't have a political opinion about the best way to improve all our lives –

Claire:  Do you think anybody's life got better?

Dr. Andrews broke up the bickering in order to bring their focus back on the surgery. It shows, though, that the left continues to gaslight about the intolerant right. There is no room for veering away from liberal groupthink.

This episode was all about the shock a liberal doctor felt realizing that two other doctors didn’t share her political ideology. The bad Orange Man still lives rent-free in the heads of Hollywood.

Do you want to fight back against liberal viewpoints in television programming? These are some of the sponsors of this episode – Macy’s, Old Navy, and Verizon.