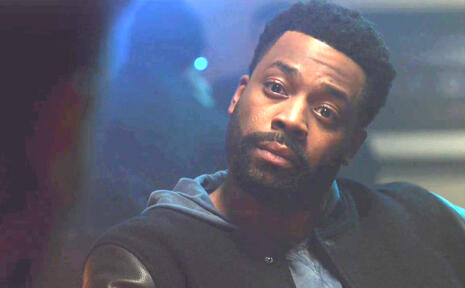 In a twist to the typical charges of racism that emerge when a white cop shoots a black person in a television drama, NBC’s Chicago P.D. took it up a notch. In this episode, a black cop accuses his white partner of being racist while they work together on a police shooting case.

Wednesday night's episode, titled “Protect and Serve,” featured the case of a 19-year-old college student, Jeff Duncan (Shawn Roundtree, Jr.), who aggressively defied Officer Dave Wheelan (Michael Rispoli) when he was stopped for a traffic violation. Duncan had a handgun tucked into his belt and told Wheelan he had a concealed carry permit. Duncan continued to refuse the officer’s instructions and Wheelan claimed he thought Duncan’s hands were moving toward the gun so he shot and killed him. A friend caught the scene on tape and the video showing Duncan being shot while standing still with his hands up went viral, leading to Wheelan being targeted for assassination.

Wheelan is arrested for murder and held at a safe house by Officers Kevin Atwater (LaRoyce Hawkins) and Adam Ruzek (Patrick John Flueger). During their time together, tensions build and Atwater snaps at Wheelan insisting on his innocence while Ruzek tries to calm him down.

Atwater: Why? Why am I keeping calm? Why are you so calm? How can you just sit there with me listening to this man defend himself acting like we didn't just see the same tape?

Ruzek: Bro, I--it was a bad shoot. What do you want from me? I'm just trying to get through this, okay? I just wanna go home. I don't want to get involved in things that are above us. That's all!

Atwater: Let me tell you what we ain't gonna do. We ain't gonna say this is above our paygrade. We are not going to dismiss this man as one bad apple because we are in this, all right? We got stop hiding behind—

Atwater: You don't gotta be Black to know wrong from right.

Ruzek:  I never said that anything that that man did was right. Did you hear me say that?

Atwater: Think about what this white man did and how the next Black kid is gonna look at you the next time you go out there.

Ruzek: I know. I know, but I'm not doing this with you right now.

Atwater: Why not? Why not? We're here. We might as well. We have been shot at, chased down, all while protecting the white cop that killed the Black kid, and I gotta live with that. Why not you? I gotta be angry. Why not you? 'Cause you the good white cop that can't understand? Who has nothing to do with any of this? Is that what you're trying to say?

Ruzek: Because I don't! That's not me. What's inside of him is not inside of me, and you should be the one to know that! How dare you, man! I'm sick of you questioning me all the time. Why is it me? Why is it me that has to answer for this guy? Huh? Ask yourself that question!

Atwater went on to accuse Wheelan of being a coward, afraid of a black man with a gun. He showed the video to Wheelan and Wheelan thought someone must have edited it to make him look bad. Wheelan truly thought that his life was in danger during the traffic stop. Finally, he realized he was mistaken and the kid didn’t move toward his gun:

Wheelan: I feared for my life!

Atwater: You feared Jeff Duncan. You saw another Black thug toting a gun.

Wheelan: Oh, man, it had nothing to do with race ever!

Atwater: It everything to do with it.

Wheelan: Jeff was noncooperative, okay? And you saw that.

Atwater: No, I saw a man who lost empathy for the people he swore to serve and protect.

Atwater: I saw a man who was scared. Scared of those people, and you were scared way before you even pulled the trigger.

Wheelan: My life was in danger.

Atwater: You ain't gonna do that. Not this time. You're not gonna defend yourself by blaming a dead Black victim. Look at that.

Wheelan: What did you do to it? That--that ain't the video. He moved. His hand moved for his weapon. It moved!

Atwater:  He did not move.

Ruzek: He never moved. What on Earth would make you think he--

Station: Adam, Kev. We got the second shooter. You're all clear. You go ahead and bring Wheelan in.

Wheelan was so distraught that he moved in the line of fire as the brother of the dead college kid ambushed the three men and died.

The episode ended with the partners having a tense exchange at a bar, with Atwater saying accusingly, "Wheelan believed Jeff moved. Swore he saw something that didn't happen. Wheelan didn't know he had it in him. What if you can't see it coming?"

In an interview, LaRoyce Hawkins (Atwater) said it was his job is to "make black people look good" to white audiences. “I know that my responsibility isn’t just to make Black people proud. It’s also to make Black people look good because we have a white audience that is very invested in our show. The things that they see Atwater do and the way they see Atwater react or respond is essentially going to have a reflection on how they react and respond to things.” Hawkins saw his role as one that will start conversations. That was liberal-speak for convincing white people that they are all racists who must be re-educated.

Conservatives Fight Back! This racial episode was brought to you in part by Xfinity, Ford, and Lexus. Contact them to let them know how you feel about their sponsorship of such content!