Bloomberg Begs Hillary to Run for President on Colbert Cartoon: 'The Billionaires Need a Voice' 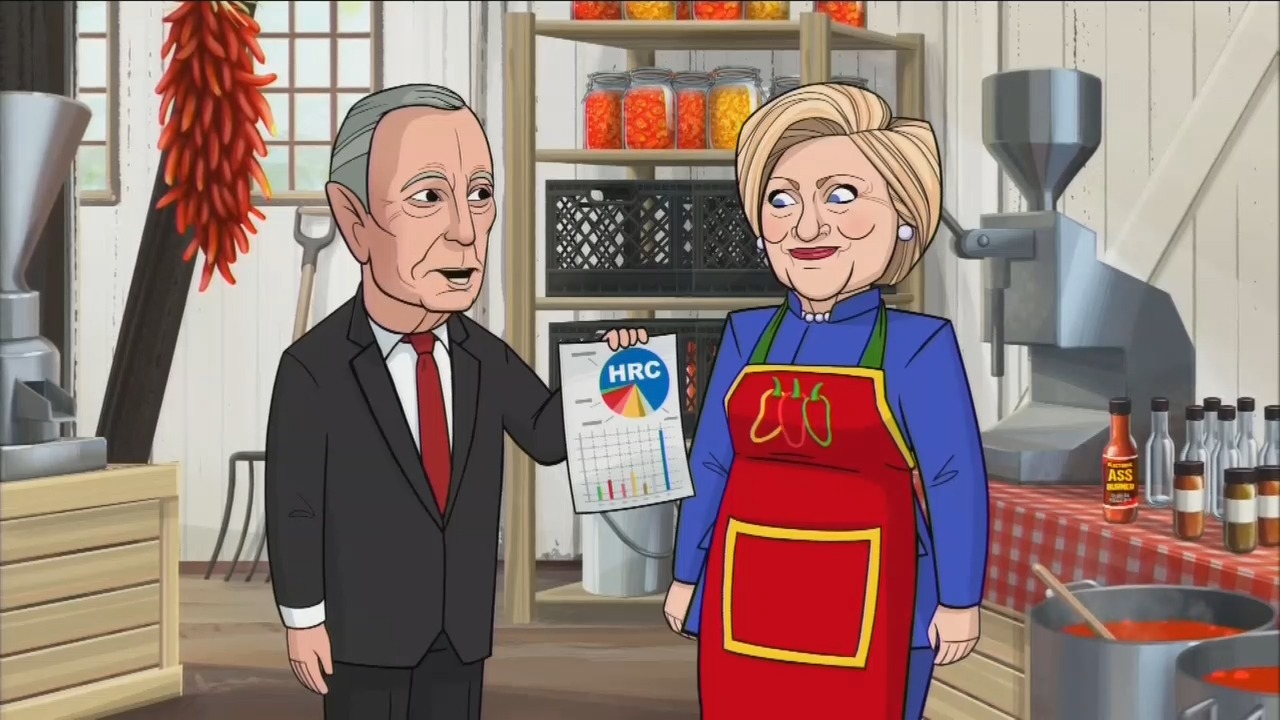 After the devastatingly poor performance Michael Bloomberg delivered at the Democrat debate in Las Vegas, he tells a group of billionaire businessmen that he is having second thoughts about buying the election. In the February 23 episode of Showtime’s Our Cartoon President, Bloomberg decides to recruit Hillary Clinton to run in his place.

In the episode titled “Hillary 2020”, Bloomberg goes to Hillary’s house and asks her to run. He finds her making hot sauce. She puts up a little resistance, claiming to be perfectly happy writing books with Chelsea but it’s obvious she is happy for the request. Bloomberg calls her a billionaire’s only hope.

Bill Clinton: Hillary? She's out in the barn. I'd take you, but I'm not allowed out of the house. Peep the shock collar.

Bill: It's because of my storied, criminal history of sexual –

Bloomberg: Bill, the less we know about your deal, the better.

Hillary Clinton: Bill, back in the house!

Bloomberg: Hillary, it's Michael Bloomberg! I spoke at your convention between Henry Kissinger and Lena Dunham.

Hillary: Oh! Hi! You can be the first to try some of my homemade hot sauce, a non-calculated passion of mine!

Bloomberg: Forget the sauce. The billionaires need a voice. You need to run for president.

Hillary: I'm much happier spending the rest of my life writing books about courageous women with my daughter, Chelsea, who I, um...

Bloomberg: But the people want you. Just look at these polls planted in Bloomberg News. With my money and your politics for hire, there's nothing stopping us from stopping socialists from stopping me from hoarding wealth.

During a book signing with Chelsea, the crowd encourages her to run and she decides to do it. Bloomberg says he will fund her campaign, of course. She officially enters the race and the other candidates grumble about it. Chelsea introduces her at an official campaign kick-off and botches it by telling the truth.

Lester Holt: It’s been long rumored and instinctually feared. Hillary Clinton is officially entering the race for the Democratic nomination.

Sean Hannity: The Beast of Benghazi, the Satan of the Servers has awoken from her four-year volcanic slumber! Rise all ye minions to battle!

Joe Biden: How entitled do you have to be to try and steal the presidency I'm entitled to?

Elizabeth Warren: It's 63 degrees today -- she'll get a sun stroke and drop out.

Chelsea Clinton: A lot of people are using Instagram.

Chelsea: But this President's domestic policies have me sliding out of his DMs and into the voting booth! In fact, I think he can't honor his sacred oath to the Constitution because he's too busy eating hamberders! –

Hillary: This speech will seal the deal. I think we're looking at our next Deputy Press Secretary for North African Digital Outreach.

Chelsea: And the only candidate whose campaign will be funded entirely by the billionaire class!

Chelsea: Yes, sir! Michael Bloomberg is bankrolling her campaign as long as she continues to keep his tax bracket at a rate of zero or below!

Chelsea: In the words of my mother not one hour ago...

Chelsea: Quote, "I can rap my 70-year-old knuckles on a million doors, or I can strut into the Bloomberg building and sell America's soul to the ninth-richest man in the world

Hillary’s own performance at the first debate she enters doesn’t go over well when she mentions that there is still more work to be done in Iraq. She eventually decides it is time for her, too, to step aside. She continues in Bloomberg’s footsteps and announces that billionaire Jeff Bezos will be a candidate.

This is what we have to look forward to as the Democrat field continues to be in disarray. Even a liberal dumpster fire of a political cartoon show like this one by Stephen Colbert can’t help but make fun of the desperate Democrats in 2020.