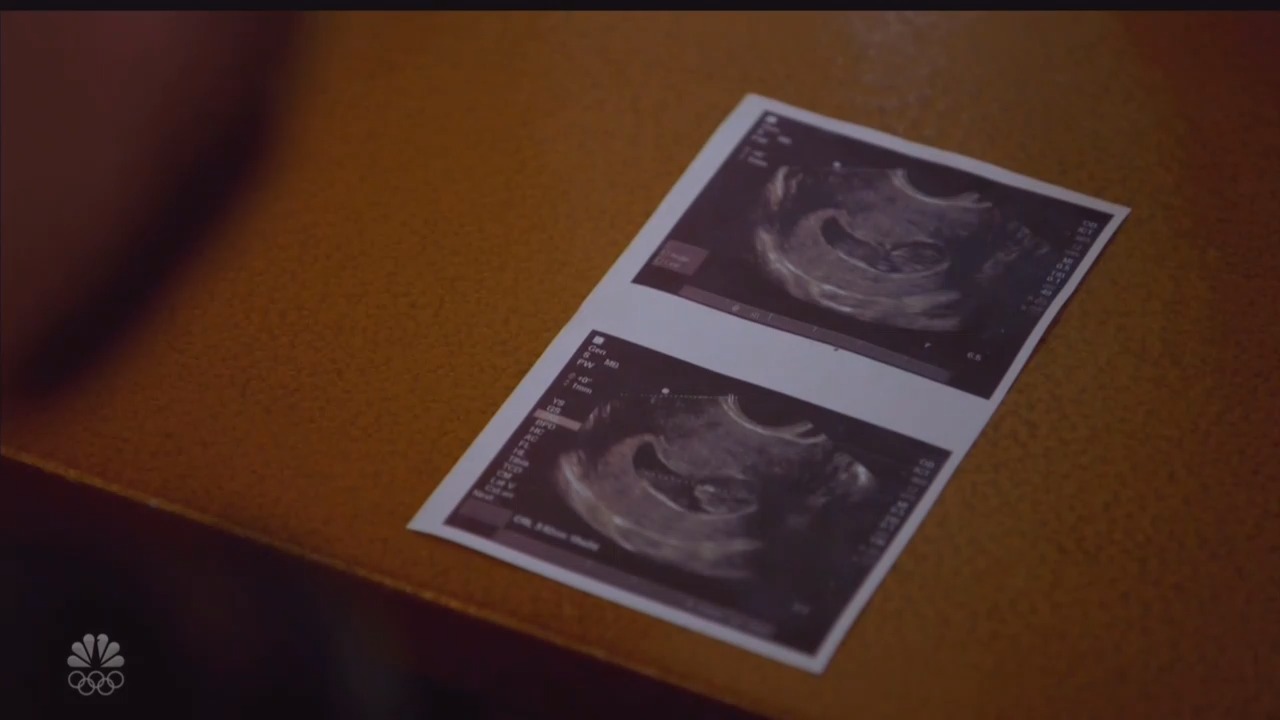 Every now and then some truth comes out during a network series that destroys a narrative long promoted by the left. Unborn babies are often referred to by the pro-abortion left as "clumps of cells," but this episode showed that ultrasounds reveal the humanity of the unborn child.

During the January 15 episode of NBC’s Chicago P.D. titled “43rd and Normal”, pregnant Chicago Police Officer Kim Burgess (Marina Squerciati) met the baby’s father, fellow police officer Adam Ruzek (Patrick Flueger), with a photograph from her ultrasound. Kim and Adam are no longer in a relationship.

Adam's initially disappointed that Kim went to the doctor’s examination and ultrasound on her own, without him, but soon accepted it. He asked to see the photograph and when she gave it to him, he was amazed at the fact that he could distinguish that it is a baby he was looking at, not “fuzzy clouds." Kim admitted that hearing the heartbeat brought home that she was "really having a baby."

Ruzek: You know I like it when you come down to my neighborhood. You sound a little off on the phone. Everything... You went to the doctor? Alone?

Ruzek: No, it's--it's just-- I don't know. You know everybody always says that these things are just like fuzzy clouds, that you can't make anything out, but... That's definitely our baby.

Burgess: Yeah. I heard the heartbeat.

Ruzek: Yeah. You know at some point we're gonna have to talk about how this is all gonna work. You know, what it's gonna mean for us, what it'll look like.

Ruzek: You know, and I just-- Hey, hey, hey, hey. When we were together, you know, we always said that we would—

They were interrupted then but later, after they were both involved in hunting down a bad guy, the two argued about Kim not wanting any help from Adam. She went into a rant about how it’s her body and the pregnancy is her burden. Poor Adam is just trying to help her.

Ruzek: Good, I think. It was a good shoot. Pretty black and white.

Burgess: Adam, I told you to stay back. I had it under control.

Burgess: I gave you an order over the DC.

Ruzek: He could have shot you.

Burgess: He could have shot you too.

Ruzek: But that's not the point.

Burgess: That is the point.

Burgess: No, you came in 'cause I'm pregnant. Adam, I'm a cop. If I tell you to stay back, I mean stay back.

Ruzek: I heard an altercation over the radio. I heard him tuning you up. What did you want me to do? You want me to leave, grab a coffee, hope it all works out for you?

Ruzek: No, no, no, I get it. Hold on. I get it. I totally get it. I just don't like what I'm getting. You wanna tiptoe around this? Fine. But things are different now. You're pregnant with my kid. My kid. And so when I heard him working you, I did what I had to do to make sure that the both of you were okay, and if that pisses you off, I don't really care. Goddamn, all I've been doing is trying to help you. That's what I've been doing since we found out, trying to help.

Burgess: Adam, I don't want your help. I know that you're the father, but I'm the one having the baby, okay? I'm the one who has to change her whole life, I have to put my career on hold, and I have to hope and pray that it's still there when I get back. Do you think that's easy and fun? This may not be what you wanna hear, but we're not together. So this isn't gonna fall on us the same. I get to do this part-- this pregnancy part-- my way, on my terms. That's it.

Fortunately, by the end of the show, Kim came around to accepting that she and Adam and the baby are a family now. She rejected Adam’s marriage proposal but said they would make their own family together. That is good news for the baby, who deserves a father.

The best part of this episode is the acknowledgment that ultrasound exams so precisely prove that the unborn child is not to be trivialized as just a lump of cells. The pro-abortion left wants to normalize a violent, intrusive behavior that ends an unborn life. The reason so many states now require women to hear their baby’s heartbeat before an abortion is that it is hard to deny the baby’s humanity after that. Technological advances now readily verify that the woman is carrying a real baby.