Michelle Obama Gets Standing O at Grammys on CBS 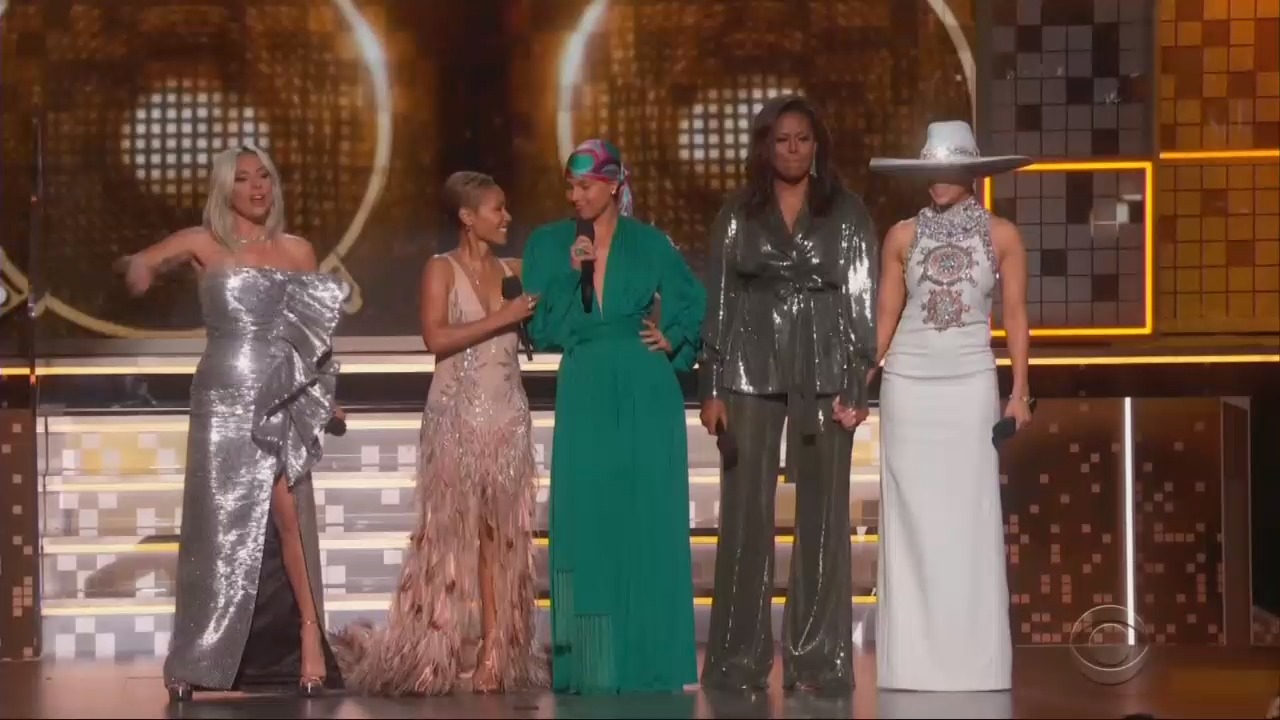 Lady Gaga, Jada Pinkett Smith, and Jennifer Lopez accompanied Mrs. Obama. Michelle, from the south side of Chicago, spoke of her lifelong love of music. There wasn’t anything special in what she said but the audience went nuts at the mere sight of her and remained standing throughout her time on stage.

Michelle Obama: From the Motown records I wore out on the south side--
(cheers and applause)

Alicia Keys: All right, all right, we got a show to do.

Michelle Obama: From the Motown records I wore out on the south side to the who run the world songs that fueled me through this last decade, music has always helped me tell my story. And I know that's true for everybody here. Whether we like country or rap or rock, music helps us share ourselves, our dignity and sorrows, our hopes and joys. It allows us to hear one another, to invite each other in. Music shows us that all of it matters, every story within every voice, every note within every song. , Is that right, ladies?

A big part of friendship is showing up for your girls—that’s why I was thrilled to be there for the one and only @aliciakeys at the #GRAMMYs. She is one of the most genuine and thoughtful people I know—there’s no one better to help us all celebrate the unifying power of music! pic.twitter.com/8cMhTmsClA

Though not a part of the regular broadcast, there was some pro-Trump attire on the Red Carpet. Latina singer Joy Villa wore a pro-Trump gown on the Red Carpet, as is her habit. Her handbag sported the Make America Great Again logo and the pattern of her dress was of a wall and it read "Build the Wall." She posted photos of her dress on Twitter saying, "I don’t care what anyone thinks. I 100% support the wall & our President @realDonaldTrump. Do you want more drugs brought in? (70% of heroin from Mexico) More illegal women getting sexually assaulted (1 in 3)? More children being trafficked? (Thousands a year) because I DO NOT!"

I don’t care what anyone thinks. I 100% support the wall & our President @realDonaldTrump. Do you want more drugs brought in? (70% of heroin from Mexico) More illegal women getting sexually assaulted (1 in 3)? More children being trafficked? (Thousands a year) because I DO NOT! pic.twitter.com/ErdOJhD5IN

Ricky Rebel brought out his Trump jacket for the #GRAMMYs https://t.co/iufxqBO9Hg pic.twitter.com/R8RSZ9HZSo

Thankfully, the Grammys broadcast was otherwise politics-free. No rambling liberal screeds against President Trump or Republicans in general. Maybe Hollywood and the entertainment business is finally understanding that regular Americans don’t tune into awards shows for political hot takes. I won’t hold my breath that the rest of awards season goes as smoothly.