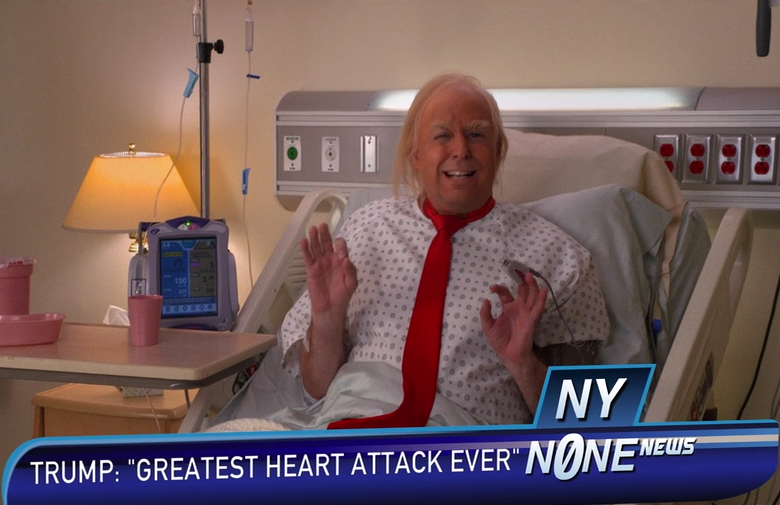 Netflix’s Unbreakable Kimmy Schmidt has come to an end. The last six episodes of Season Four were released on January 25. There is a last shot at President Trump included in the usual zany madcap episodes, though, and clearly the writers wanted to mock his wealth and physical health. How brave of them.

Episode 9, titled “Sliding Van Doors,” is all an alternate reality. Kimmy and her circle of friends imagine what life would be like if Kimmy (Ellie Kemper) had never been kidnapped by the cultist back in Indiana and the others had taken different paths in life, too. Kimmy’s dream is to be a successful writer and live in London.

One scene takes Kimmy on a commercial airline flight to London. Kimmy’s friend Jacqueline (Jane Krakowski) is looking for a way to earn $25,000 so that her husband, a construction worker in New York, can buy into his boss’s business. The dream is that this investment will lift the family out of poverty and on the path to prosperity. Jacqueline is a flight attendant working on Kimmy’s flight.

After Jacqueline gives the routine instructions to the passengers, Kimmy calls her over to her seat in First Class and asks Jacqueline if this job is her dream. Jacqueline says she just wants to “meet someone fancy and never have to work again.” About this time, Donald Trump (Anthony Atamanuik) pipes up and says, “I make tall penis buildings and they have sex with the sky.” Kimmy tells Jacqueline that this guy is the best she’ll find on a commercial flight and encourages her to “hump Trump.” “I hear he’s almost a millionaire.” Meanwhile, Trump is stuffing a huge hamburger into his mouth.

Trump says, “My biggest accomplishment? Not getting AIDS from Roy Cohn.” Kimmy continues to encourage a hesitant Jacqueline to “go be his mistress or blackmail him or whatever.” Brilliant. Trump explains that he is flying commercial because “Trump Airlines is too classy and successful. The tickets are all sold out.”

Later Jacqueline and Trump are shown in the crew area of the plane, Trump is laying on the floor, pants down, babbling incoherently, “I was born in Kenya.” Trump has suffered a heart attack. Kimmy’s flight is called back to New York because of the medical emergency, her dream of moving to London temporarily postponed. As Trump is shown recovering in the hospital, nobody is at this side. He brags, “I died for almost 6 minutes during which time I saw Hell. Full of losers. Sad!” Got that? Trump is going to Hell.

Earlier during Jacqueline’s fantasy, she dreams of meeting her husband Michael and when they go up to their room in a hotel, Michael turns on the television. There’s Donald Trump in his days of The Apprentice. In the background is Trump talking and declaring Richard Wayne Gary Wayne (Kimmy’s former captor) as The Apprentice. Then Trump tells everyone to go, except for Omarosa. Ugh.

So, once again, we see that there is always room for random mocking or insults toward President Trump since his election in 2016. Hollywood is having a really hard time coming to grips with that election’s results. There is no attempt at respect for the leader of the free world, that’s for sure, even in a ditzy Netflix series.