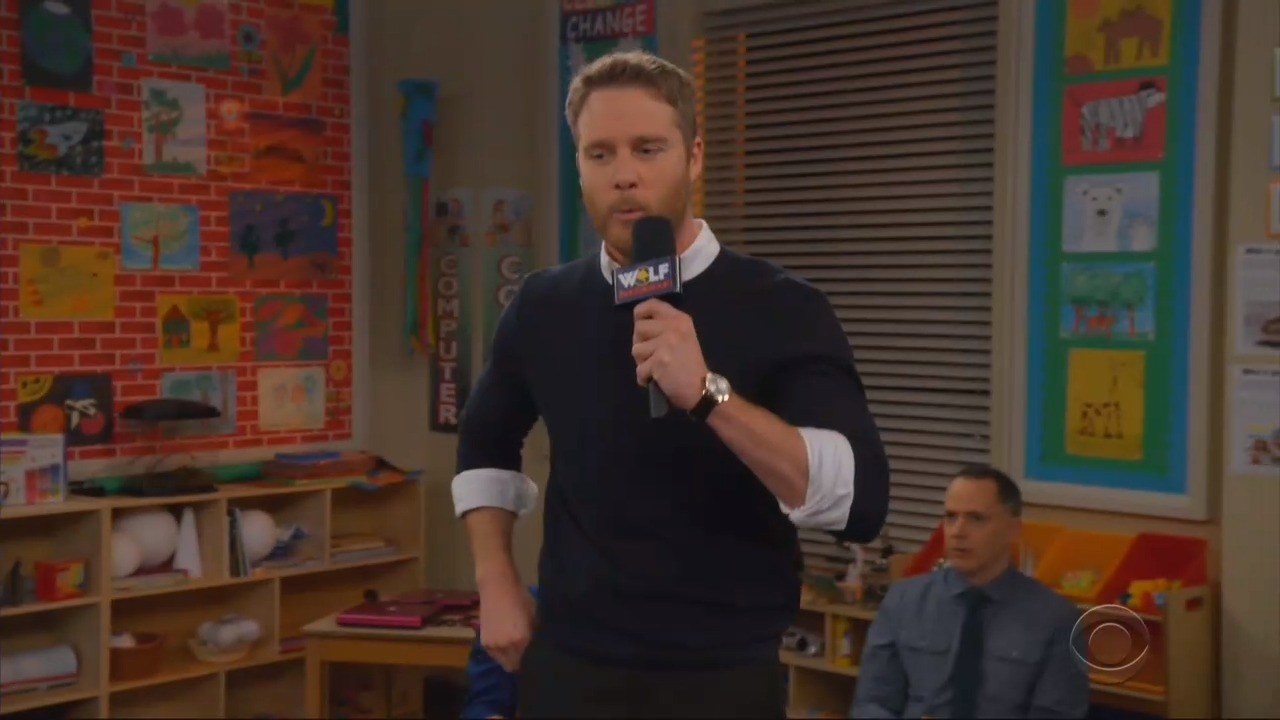 We knew that the son of liberal news anchor Murphy Brown on CBS’s Murphy Brown would probably not last too long in his new job with a conservative news network. He didn’t. In the episode airing December 6 titled “The Wheels On the Dog Go Round and Round,” Avery Brown quit the show's version of Fox News in a righteous huff, railing against them "shilling for this current administration" and feeding the audience "B.S."

Avery (Jake McDorman) thought that by going to work for Wolf Network he could “change the culture” because he’s as liberal as his mother. Murphy warned him that he would be expected to just read a right-wing script but he refused to believe her.

After Avery received a prime-time slot for his show on the Wolf Network, he thought he had an agreement with management to be independent but soon found out he would be expected to read a scripted statement at the end of his show. Avery was in a classroom in Texas interviewing teachers when he was told by his producer to just read the words management wrote on the Teleprompter instead of his own for his closing and that is when he had an on-air meltdown.

Avery: An interesting thing about news is how quickly it spreads and how often it's not only incorrect, but also... Fake. Many news sources hide their bias by burying it deep within stories. That's why you should question whatever the mainstream... media... No, I can't do it. You know what? You should question whatever the Wolf Network tells you, because they will feed you any amount of BS that you are willing to believe. See, here at Wolf, we don't care about facts. All we care about at Wolf is shilling for this current administration. You know what? Actually, you guys would save a lot of money by firing your so-called journalists and just bringing out a ventriloquist's dummy, sitting it right there on the knee of the President and just letting him reel off whatever he wants you to hear. You know, I stuck with this place because... ...God, I thought I could change the culture around here, but believe me -- I can't. That's not gonna happen, not unless you out there get up off your couch and you let the powers-that-be know that you are not gonna take it anymore. This is Avery Brown signing off, taking my soul with me.

This is an obvious reference to the Sinclair Broadcasting story a few months back. When the story on Sinclair came out, every liberal news outlet voiced their opposition while feigning innocence that their own networks didn’t do the same thing, only with a liberal point of view being recited. In order for the writers of Murphy Brown to take a swipe at the highest rated cable news network, the conservative-leaning Fox News, the story is written that the parent network is doing the scripting. The only acceptable narrative anywhere is a liberal one for most news networks.

Preceding his on-air resignation, Avery interviewed some teachers in a classroom in Lubbock, Texas, which gave the writers more political fodder. Anti-gun himself, Avery introduces the segment with a claim that “weapons and military tactics” are going to be introduced into classrooms. The teachers are mixed in their answers to Avery. When asked if they were ok with the proposals, one teacher didn’t think it was a good idea to “be in a cloud of Axe Body Spray and also hold a gun,” one wanted the extra pay for training, a Marine worried that even trained shooters “only hit their target one out of 10 times,” and a music teacher wasn’t worried about it all. The music teacher owns a gun but was portrayed as fumbling and absent-minded.

Avery: Hello, and welcome to "Avery Brown's America" in our brand-new 10:00 P.M. Time slot. We are coming to you live from High Plains Elementary School in Lubbock, Texas. Now, Texas is one of our most gun-friendly states, so where better to discuss the controversial idea of bringing weapons and military tactics into our classrooms? Local area teachers share their thoughts. Now, Lisa, you're a veteran teacher, right? How's all this sitting with you?

Lisa: Not so good. Teaching junior high is hard enough. You don't want to make me stand all day inside a cloud of Axe Body Spray and also hold a gun.

Teacher #2: Even if you were getting paid more money to do it? The president said he'd pay teachers extra for gun training. I could use the money.

Marine:  I'm a retired Marine, and I've spent a lot of time around guns, and I can tell you that even with the best training, most shooters only hit their targets one out of 10 times.

Avery: And what about you, Barbara? You've been a music teacher your entire career. I'm guessing you would not like to see arts programs cut back in order to finance guns?

Barbara: Well, they wouldn't have to buy me a gun. I've got my own. And if a shooter came into my classroom, all I'd need to do is grab my glasses. Oh, no. These are my readers. Probably left my other glasses in the car again. Then I'd have to load my gun. I keep the bullets in my desk drawer. Or did I move them to the locker? Anyway, once I find them it's only a minute to load up and then, pow! You chose the wrong classroom, bad guy!

Producer: And we're clear. Back in 60 seconds.

Just like all the liberal news outlets, Avery succumbs to claiming that Fox - I mean, the Wolf Network - is only interested in doing the bidding of the president and his administration, not reporting real news stories. It’s not very creative but certainly predictable from this show, as the only reason for the Murphy Brown reboot is to bash President Trump and his administration. They admitted if President Trump had not beaten Hillary Clinton in 2016, the show would not have come back.

Somehow Candice Bergen has been nominated for a Golden Globe award for her role as Murphy Brown. She even thanked President Trump for her nomination as she spoke to the press. She can also probably thank him for her terrible ratings.