The creative force behind Murphy Brown 2.0 made it clear why the sitcom rose from its sitcom grave.

The head of Warner Bros. asked for the reboot, thinking the show could be relevant again in the Age of Trump. Murphy Brown creator Diane English worried a reboot might tarnish the show’s Emmy-winning legacy – at first. She quickly came around, realizing she could weaponize the show against the current Commander in Chief.

Hopes for a second season dangling like a chad. (This week, there were disputed reports that the show was cancelled.)

And yet Murphy Brown’s re-emergence offers something else. More proof, as if we needed it, how modern media works. The sitcom’s liberal bias is clear, unrelenting and with little sign of stopping.

Just like we see every day on news sites nationwide.

The new Murphy Brown, alas, wants to do more than share the facts. She’s also determined to defend the press. Here’s English sharing the philosophy behind both Murphy and the reboot:

She’s trying to bring the old era back into the new era. It’s kind of a mission of hers. We do write the show from the perspective of the press. The press was really considered heroic back in the day. Walter Cronkite was the most trusted man in America, and now the press polls lower than the President. It’s all this running around yelling “Fake news!” that makes people distrust the press. Plus, this sort of invasion of false equivalency, and Fox News expressing opinions that are based on nothing, really has diluted the whole impression that people have of the press now. And we’re trying to bring them back to their glory days, because our characters are the press.

Only Murphy Brown 2.0 is doing a terrible job both defending journalism and staying neutral. Here’s what we’ve seen in just a few short weeks:

Murphy goes all in on open borders, threatening to fight the U.S. government (ICE) with every bone in her body.

One episode shows a DREAMER lamenting his illegal status, saying he’s just as American as anyone else. 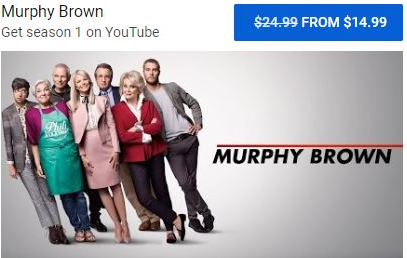 That’s just a sample of the show’s progressive propaganda, all from a program based around a “just the facts” reporter trying to save journalism.

Had the new Murphy Brown abandoned her fair and balanced shtick from before and embraced her inner MSNBC, the reboot would at least make sense.

News outlets have been spinning Trump’s shocking victory ever since Nov. 9, 2016. Reporters ran with the “Fake News” meme, hoping it would explain away his electoral win. When Trump used it against them they cried, “no fair!”

Then, reporters plowed ahead with the Russian conspiracy angle to explain 11/8/16. They hoped it would catch fire, even while the facts refused to back them up.

The Left and mainstream media outlets, more often than not, work in lockstep. It’s fitting, then, to see the press’ fictional warrior spit out progressive bromides each week while posing as a neutral observer.

Murphy Brown 2.0 is a perfect symbol of journalism’s precipitous decline. Even this literally fake reporter can’t hide her biases.

Of course, there’s a reason for this. English is using Murphy to say all the things she wants to say. English’s Democratic bona fides are impressive, only she didn’t have a platform to share them.

She does now. But for how long?

Can Murphy Brown survive for a second new season? The show’s ratings have dropped in all but one week since the show’s Sept. 27 return. Its aggressive anti-Trump standing may be its temporary salvation. Hollywood often looks past hard numbers when it wants to send a message.

In the case of Murphy Brown, losing the umpteenth anti-Trump voice may be something CBS hopes to avoid.