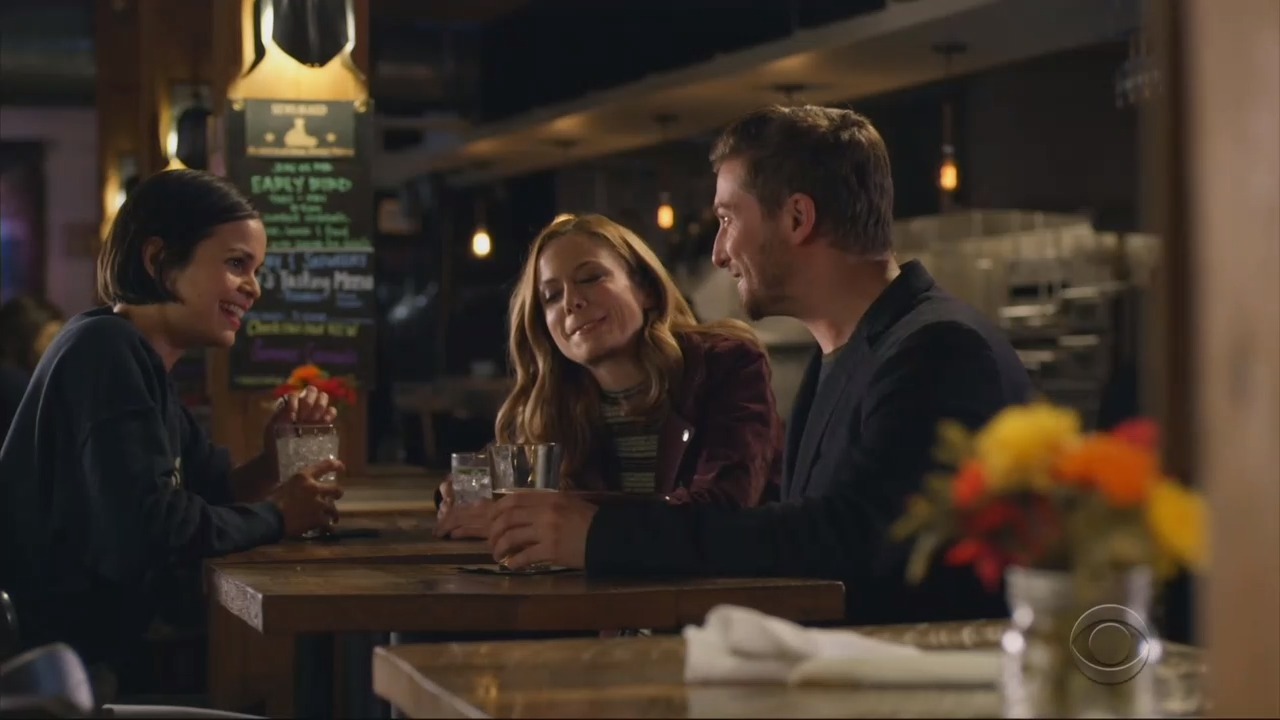 Chris is working on a budding relationship with Kira (Claire Coffee) who springs the news on her that she is engaged to a man. Chris naturally feels betrayed but is soon invited to join in with the couple as a third member of the relationship. Chris begins the November 15 episode, titled “The Tiffany Experience,” worries about what her co-workers' reactions might be should she decide to go through with the unorthodox relationship.

The men on the S.W.A.T. that she speaks with are supportive and Sergeant “Deac” Kay tells her that he is concerned that she is setting herself up for heartache since Kira and Ty will be married and Chris won’t be a part of the married unit. (How long before we're told it's bigotry and #H8 to restrict marriage to only two people?) Otherwise, it’s her business and not his, he tells her.

After a wild day dealing with a stalker trying to kill the handlers of a lifestyle vlogger, Chris meets up with Kira and Ty to tell them her decision. She’s ready to “mesh” since she realizes her co-worker will not be judgmental of her after all.

Kira: That was all over my feed today. That was you?

Chris: And the rest of my team, yeah.

Kira: Just a day in the life, huh?

Chris: It was crazy. It can be. Or it can be just sitting around all day waiting in HQ for a call.

Chris: Yeah, I hear painting's dangerous work. I mean, those fumes can be so toxic, you know. Oh, my God.

Ty: Uh, all right. So, you obviously didn't come here for my amazing jokes.

Chris: Mm-mm. I, um... I've been thinking a lot about this today, and-and the truth is, I-I already knew I wanted to do this, but I was worried about what people would think. Actually, I had to deal with that today with a member of my team.

Kira: People are surprisingly tolerant when you give them a chance.

Chris: He did make one good point though. The two of you, you guys are getting married. You both are entering a lifelong commitment with each other. It makes it really hard not to think of my position as just temporary.

Kira: Yes, we are getting married. But if we start a relationship with you, you will be an equal part in that new relationship.

Ty: And it's better this way, don't you think? I mean, this way you don't have to worry about your relationship with each of us separately. There's just one question: How do you mesh with the two of us as a unit?

So, there you have it. It is no longer enough to have a bisexual character in a television show, Hollywood has to up the ante and push polyamorous relationships on the viewer because it's "tolerant" and "it's better that way."

This is the Hollywood bubble. Gender is fluid and traditional marriage is not good enough – a third person is added as though it is perfectly normal. Somehow, I don’t think middle America will see it that way.