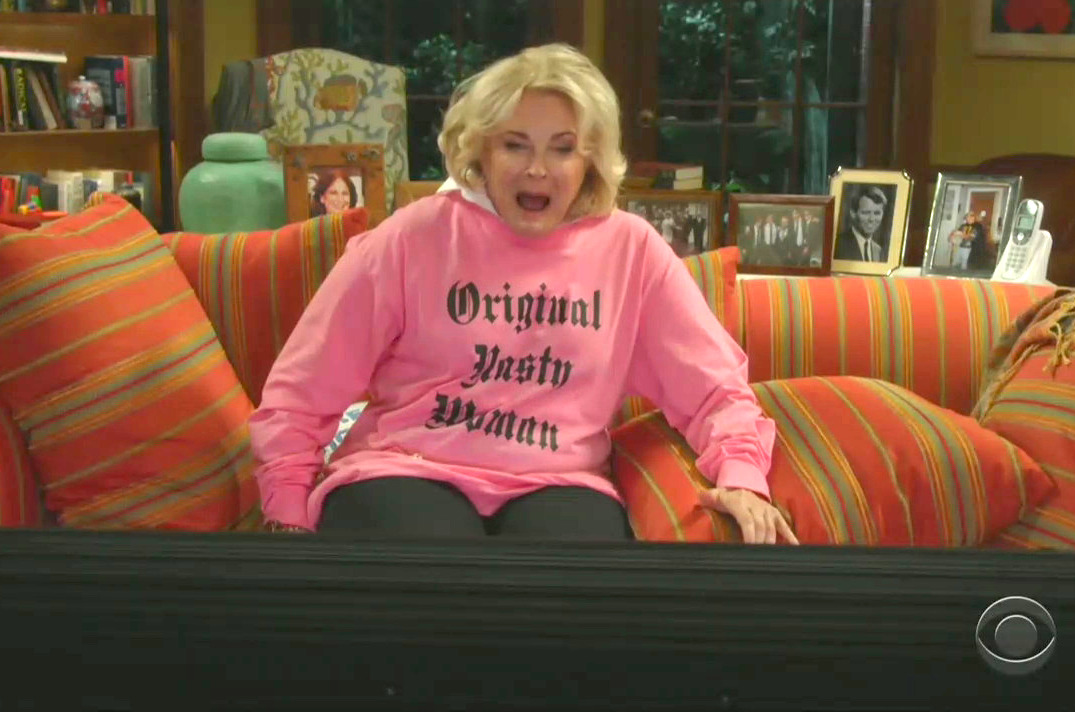 One thing is perfectly clear: CBS's reboot of the show Murphy Brown would not have happened if Hillary Clinton had won the 2016 presidential race. While that fact is admitted, it is hard to imagine why this show is needed given the abundance of bashing on network television of President Trump, but still they do their level best to provoke a Twitter war with him.

In the Thursday night premiere, titled “Fake News,” after years in retirement, Murphy (Candice Bergen) is so outraged by President Trump that she has accepted an offer to do her own morning show, Murphy In the Morning, and wants the old team around her. Plus a new potential secretary - Hillary Clinton makes a cameo.

After gathering with Frank Fontane (Joe Regalbuto) and Corky Sherwood (Faith Ford) at a coffee shop after the Women’s March following the inauguration of President Trump, they all go to find Miles Silverberg (Grant Shaud) to produce the show. I’ll note, too, that Murphy was attired in a sweatshirt with Original Nasty Woman across the front and Frank arrives in a pink pussy hat to meet Murphy and Corky. Yes, it is that on the nose.

Poor Miles. After Murphy’s original show was canceled, we learn that he took a job producing The View and that hot mess of a show caused the man to have a breakdown and be hospitalized. Miles can’t handle all of the usual tropes liberals like to present to show how bad the country is, especially in Trump’s America. He lists climate change, mass shootings, North Korea nukes, and Matt Lauer – GASP! Murphy agrees about the new state of current events - “O.J. is out, Nazis are in.” - and that you can't hide from the world, you have to try to change it. Oh boy.

Yes, Frank, we all hate Nazis. Too bad the far left so often acts like them in their authoritarian demands that we live in a world of liberal group think and then smears all of us to the right of them with the term. 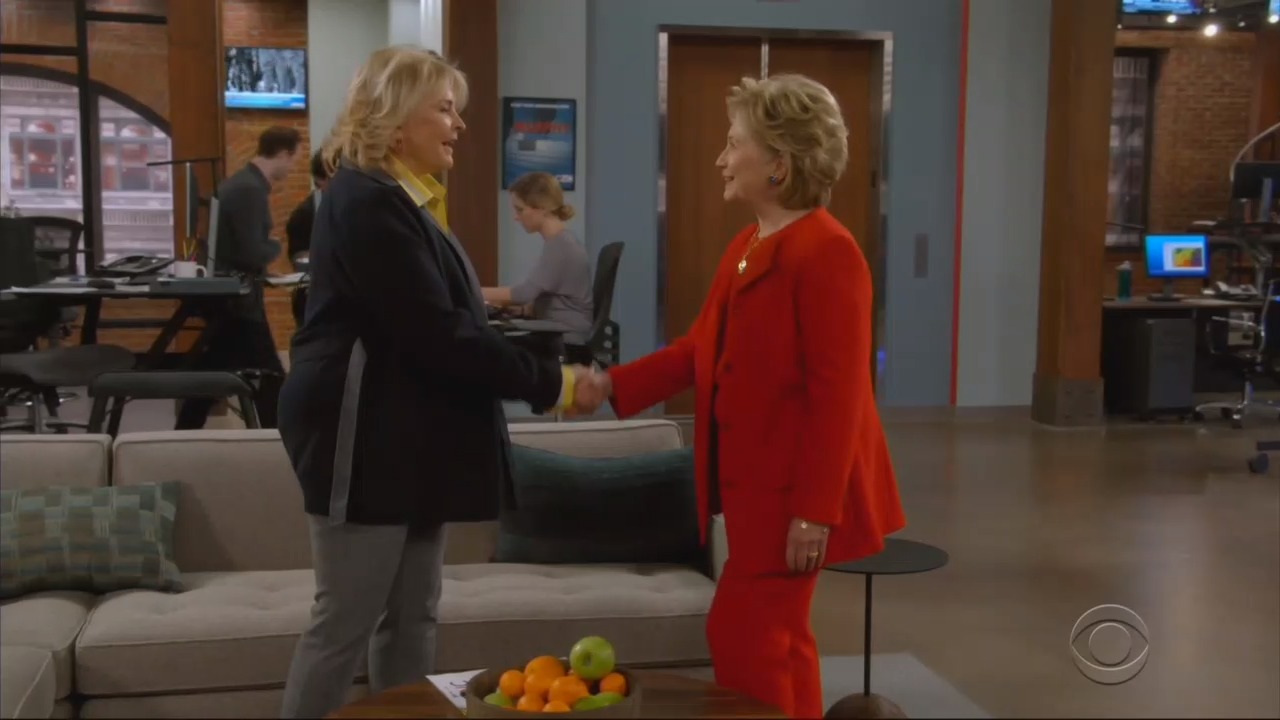 Naturally, since she is the reason for the show, Hillary Clinton makes a cameo appearance. She plays a woman applying for the job of Murphy’s secretary - "Hilary (with only L) Clendon." I told you the jokes are too on the nose.

You may remember in the original series, Murphy’s inability to keep a secretary was a running joke. Hilary touts her experience, "I was the secretary of a very large organization," her computer skills (including emails! "I do have some experience with e-mails."), and her ability to be a part of a team, “It takes a village.” Ugh. As she leaves she gives Murphy her business card with the email address listed as Hilary@youcouldahadme.com. Thank goodness we dodged that bullet!

A swipe at conservatives and Fox News came as Murphy spoke with her now 28-year-old son, Avery, who has been hired by the Wolf Network and Murphy is appalled. She works for CNC, (think CNN). Murphy describes Wolf Network as the place “where all the male anchors are conspiracy theorists and the women are dead behind the eyes.” Classy. Avery explains he did so well for the network covering the 2016 campaign that Wolf is giving him his own show. He plans to make it a voice for the people he met on the road who care about the country: “You know, people who drive pick-up trucks, and have kids in the military and save their coupons and go to church on Sunday. They deserve a voice.” Murphy responds, “They have one. It’s orange, lives in the Oval Office and is Facebook friends with Putin,” to the cheers of the audience.

Turns out the mother and son will be competing for ratings as they are in the same morning time slot. That should create some interesting stories.

And, not to leave President Trump’s tweeting habit out, Avery helps Murphy create a Twitter account. He gives a bit of advice to his mom about Twitter, telling her to think before she tweets because “shows have been canceled for less.” Oh, a Roseanne reference. How clever. Not. Her first tweet – against the advice of Avery – is “I once went on a date with Donald Trump. He made us split the check.” Naturally, Trump takes the bait and gives her the nickname of Old Murphy. *snort*

On Murphy's new morning show, they interview a senior manager at the EPA (appointed after she “ran the gift shop at Trump Tower”) live from the Alaskan wilderness where she’s “advocating opening it up to oil exploration.” It turns out Trump is watching and Murphy continues the Twitter feud with him as he tweets about the show in real time.

Murphy: The EPA recently scrubbed all mention of climate change from its website. And there seems to be no mention of the benefits of solar and wind power.

EPA Manager: Actually, the benefits of alternative energy sources are up for debate. I can totally tell --

Murphy: Did she just fall through the ice?

Pat: Miles, look! Look! We have a visitor.

Miles: Is this for real?

Murphy: Are you kidding me? The President is tweeting at us? "'Old Murphy' doesn't know what she's talking about. Turbines bad. Kills all your birds. I'm against wind."

Frank: Congratulations, Murph. He gave you a nickname.

Murphy: Who is he calling old? I'm younger than he is.

Miles: Are you crazy? Keep it together, Murphy!

Frank: "Nobody remembers who Old Murphy is. She tries to get publicity by attacking me. Sad!"

Murphy: The only sad thing is your tweets. Somebody should put one of those electric dog collars on you, and every time you grab your phone, zzzt!

Frank: "Be careful, Old Murphy. You hit me, I hit back ten times harder."

Murphy: Oh, you bring it on. Hashtag Dan Quayle. And another thing--

After, there’s actually a bit of contrition and introspection. “I wanted to do a show that didn't stoop to all the blaming and the name calling. And, instead, I became exactly what I despise,” Murphy bemoans. When her son consoles her, saying it was still good television, she responds, “There's a difference between good television and journalism. This is why the people don't trust the press anymore.” Finally, a little bit of truth! Unfortunately, this important realization quickly forgotten as the ratings come out and Murphy’s show was a huge hit.

We’ll leave you with this about the show. It has all the markings of another lame reboot that misses the mark. It’s like Will & Grace, for example. Back in the day, the original shows broke new ground in comedy. They were liberal then, too, but at least they used to be somewhat edgy and usually rather well-written. Today, though, the airwaves are filled with anti-Trump dialogue and lame jokes that insult conservatives. It’s not new or fresh. It’s tiresome. Sad! We’ll see what happens with this one, but it's not looking good.