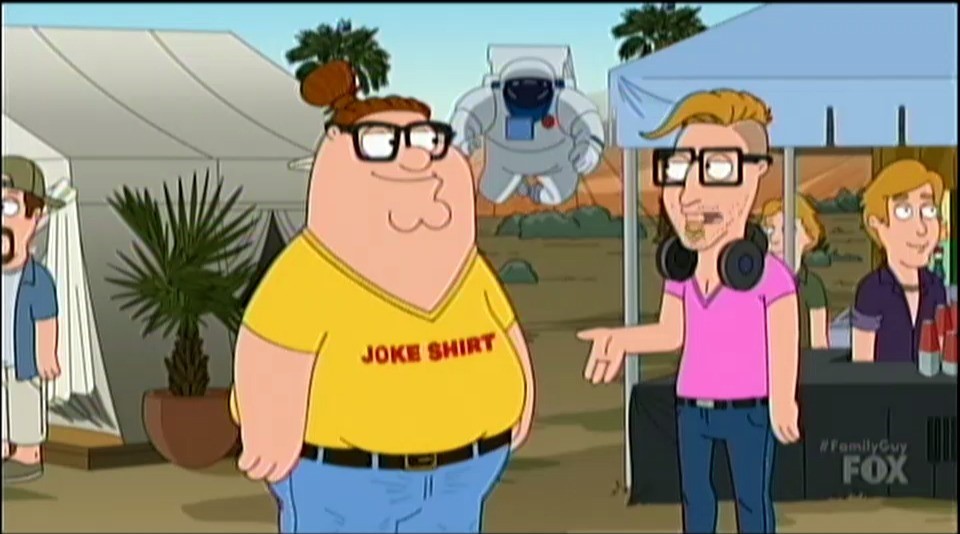 The May 6 episode of Fox’s Family Guy titled “HTTPete” took great pleasure in lampooning a favorite target – Millennials. In order to reverse lagging sales, Peter Griffin’s employer realizes he must reach out to Millennials to capture their market.

Peter’s boss at Pawtucket Brewery introduces a Millennial named Hammer as their social media director after showing the team a film about Millennials. The film is like those old school instructional films in black and white.

Boss: To learn more about our target demographic, we're all gonna watch this instructional video.

Announcer: A Millennial can be defined as anyone born between 1982 and 2000. Or anyone who thinks loving sriracha or Austin, Texas, counts as a personality. Millennials crave things like: Instant gratification, authentic experiences, and, for some reason we haven't figured out yet, improv comedy. Here's one Millennial who has a parakeet with nine million followers on Snapchat. Here's another who singlehandedly started the hashtags that cancelled 12 network TV shows she found offensive. And now I'm told she identifies as a man, so I'm being fired.

Announcer 2: Hello. I'm your new announcer. And actually, he was just about done. Thank you and good day.

Hammer introduces himself to the group but doesn’t thank the boss for his job "because I just expect good things to happen to me without working for them.” HA! Then he announces he wants to list his trigger warnings. When one team member asks what a trigger warning is, Hammer is triggered and the employee ends up getting fired after Hammer sends a tweet about it and it goes viral. Is this sounding familiar in today’s world?

Peter hangs out with Hammer and even sports a man bun. Yuk. Hammer teaches Peter about vaping and soon Peter is just as unable to live without his head down looking at his phone like Hammer. While out one day, Hammer is hit by a truck because he isn’t paying attention to traffic. He dies and the boss names Peter as the new social media director.

During the Hammer’s funeral, the pastor reads from the book of Just Jared, a nod to a popular Millennial website devoted to pop culture and celebrity gossip. After Peter launches a six-second talk show because Millennials have such short attention spans (featuring a walk-on by former Vice-President Joe Biden), a Silicon Valley CEO appears in a hologram to invite the Griffin family out to California to see his operation, Boop.

The visit to Boop abruptly ends when Peter accidentally causes the entire Internet to stop working. While trying to find the gender fluid bathroom, he goes into the room housing the computer mainframe and urinates on it. What can I say? This is Family Guy.

I think anyone who has been frustrated by the effects of the vapid, PC Millennial generation on life today will appreciate the familiar references and jokes at their expense. It’s all in good fun.