‘UnREAL’ Shames Veteran: 'Military Took Your Humanity, Made You All Killers' 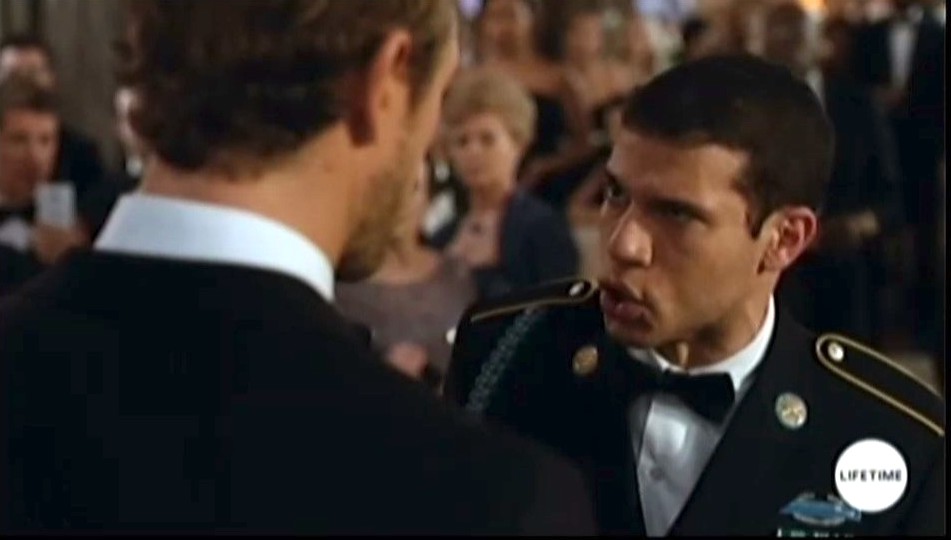 In a particularly distasteful storyline involving a war veteran, Lifetime’s UnREAL cynically used a soldier’s service in Iraq to win the affection of the bachelorette, aka suitress, in the fictional dating show Everlasting. One of his rival contestants is a liberal pacifist, so the producers of the show decide to exploit the veteran’s story and pit the two against each other as a rating winner.

In the penultimate episode titled “Codependence” that aired on April 23, the show’s suitress, Serena Wolcott (Caitlin FitzGerald) is talking to contestant Owen Boyd (Alex Hernandez) during some one on one time. Serena encourages Owen to open up about his time spent in Iraq so that she can feel closer to him. She told him that her own father is a Vietnam veteran who never opened up about his military service so she never felt truly close to him. He complies and tells a story that still gives him nightmares.

After an ambush during a day patrol, his unit was sent back to the site the next day where Owen saw a little Iraqi girl sitting next to her dead mother. Haunted as he told the story, he got weepy. Owen said he sometimes sees that little Iraqi girl’s expression in the face of his own young daughter.

Executive Producer Quinn King (Constance Zimmer) gets super excited about the interaction and gushes over the “man tears” and says, “Wounded warrior shit is, like, the definition of pussy magnet.” Ugh. Quinn tells the showrunner, Rachel (Shiri Appleby) to make sure that Serena picks Owen as her choice by referring to him as “Daddy Do-Right.”

The three remaining contestants and Serena are next together at a gala honoring Chet. Quinn learns that she is about to be fired from the show. Quinn needs a major distraction during the gala so that the show’s top brass doesn’t have a chance to announce her ‘retirement’ from the stage so she has more time to save her job. Rachel seizes the opportunity to exploit Owen. He shows up at the gala event in his military uniform and Rachel thinks it’s a great idea to deliberately pull pacifist Aussie contestant August (Adam Demos) aside and ask what he thinks about Owen’s attire. August takes the bait and launches into the usual babble from the anti-war left.

Rachel: Owen he’s not in a tux. What do you -- How do you feel about him wearing his military uniform tonight? I mean, I know that you're a pacifist.

August: Yeah, I am. Um, all right. I'm not really into the military's mission myself, but I just try to live and let live. Owen's not a bad guy. I'm sure he believes in what he did over there.

Rachel: What do you think he did?

August: I mean, I know that we've all seen the pictures of those dead children. I mean, Owen wouldn't -- In any war, every soldier has some responsibility for what happens.

Rachel: But most people think that the troops are unbelievably brave.

August: Look, I can't think of anything more brave than standing up for what I believe in, which is the dignity of human life. I mean, soldiers enforce fear and submission. I've worked all around the world to promote peace. I've been out there on the front line.

Rachel: Yeah, but not like a veteran has, not really.

August: More than a veteran has, and I was unarmed. What is weak is hiding behind a uniform and armor and machine guns, and then you go and call yourself a hero? Sorry, but that's my definition of cowardice. Uh, are we done?

Rachel's plan is perfectly set into motion. The videographer shows Owen August’s anti-military statements, and Owen challenges him on it. August ends up doubling down on his statements taunting him about how many women and children he's killed because of "the power of deadly weapons." Then he goes for the jugular, asking what if his daughter was an Iraqi girl and saying the military took away his humanity and turned him into a killer. (Even though Owen has been the most sensitive of the group, with the daughter he puts first in his life and his work helping people as a fireman.)

August's words have their intended effect and Owen ends up fighting him, nicely preempting the announcement about Quinn. Quinn lives to see another day!

Owen: Hey, what the hell have you been saying about me, man?

August: Listen, I don't want to be involved in any aggression, all right, mate?

Owen: I'm defending myself against aggression. Against your attack on the military I risked my life serving in. You got a problem with that? Say it to my face.

August: Yeah, I do have a problem with it, okay? That's what pacifism is.

Quinn: Turn off the stage mic and turn up the contestants' lavs. Put 'em through the speakers now!

August: -What about them?

Owen: It's not that simple, man.

Owen: There are sick individuals in this world who prey on the weak and vulnerable. Somebody's gotta stop 'em, and I'm sorry, but they don't exactly respond to incense and drum circles.

Quinn: This is great.

August: But how many people have you hurt or killed because you had the power of deadly weapons, mate? How many women, Owen? How many children?

Owen: If I were you, I would shut my mouth right now.

August: What if your daughter was a little Iraqi girl? Would those Iraqis matter to you then? I'm not gonna fight you, mate, all right? I've got principles.

Owen: Oh, yeah, it's easy to hide behind principles when you have the privilege of living in a bubble where you never had to make hard choices.

August: No. Be honest, mate. This is who you really are -- a fighting machine. The military took your humanity. They made you all killers.

After the big fight, in order to capitalize on the chaos, the gala becomes a time to honor veterans. The guests wear blue ribbons to honor those who face struggles at home and an inspiration video is played. Yes, it’s just that dumb and insulting.

Owen apologizes for his behavior, saying people's right to express their opinions is what he fought for and Serena forgives him. She sends August home because she realized "you live in a bubble, a world of what should be instead of what is," and she doesn't want that in a partner.

Fortunately, the season finale of this show was also aired tonight. I realize the show is a satire, but the use of a veteran’s PTSD over the nightmares of war for ratings was obnoxious. I have no doubt, though, that this is how much of Hollywood thinks. And the pacifist represents the anti-war loons who think it is they who are the real heroes. It’s just too much, even for a show titled UnREAL.