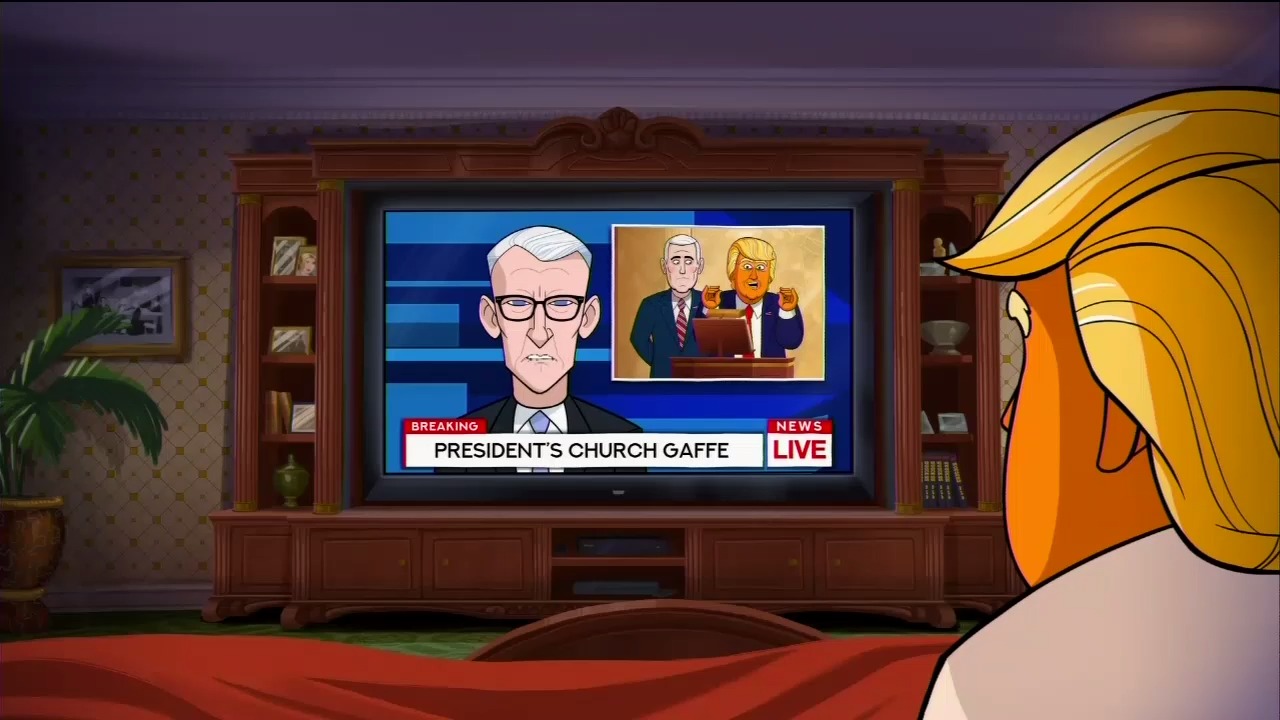 In “Church and State” he is caught on an open mic saying to Vice President Mike Pence that he would "cut off God’s penis” if his wife were to become pregnant as Joseph’s wife, the Virgin Mary, did. He also mocks the faith of Christians, wondering, "How do grown adults still worship Jesus?"

Naturally, CNN’s Anderson Cooper reported on the gaffe that evening.

Melania: How was church today?

Trump: Uneventful. They love me over there.

Anderson Cooper: "President Satan." That's what many are calling President Trump after he was caught on a hot mic committing the biggest religious gaffe since Reagan armed the Taliban.

Trump: Was that Joseph guy a putz, or what? Clearly, he wasn't taking care of Mary's needs. I mean, if God knocked up my wife, he'd never doink again. I'd cut off God's penis.

Trump: Mike, stop acting like a tech buff. You think your great-grandfather hunted dinosaurs. How do grown adults still worship Jesus? I mean, where was Jesus when the Taj Mahal was at a standstill with the unions?

Melania: Sometimes people need to believe in something bigger than themselves. Like how I believe this entire experience is just a dream inside a giant's mind, and when he wakes up, I will be back in Trump Tower with my friends, the help.

“How do grown adults still worship Jesus?” Really? On the evening of the culmination of Holy Week, Colbert’s team thought it was a good idea to run a show so disrespectful to Christians and Trump’s evangelical voters. What dark souls these folks have.

In order to boost his knowledge of the Bible, Press Secretary Sarah Huckabee Sanders tells Trump he should attend Mike Pence’s Bible study. Trump is bored with this because no one is talking about him so Pence volunteers to arrange a visit for Trump to a Houston mega-church for the publicity. Senator Ted Cruz shows up to try and hog the spotlight – a common occurrence in this series – and speaks in a mockery of speaking in tongues to the congregation. Then Trump begins to speak.

Pence: The time has come, Mr. President. Your flock awaits.

Ted Cruz: Ted Cruz! Aaaah! This event's a great opportunity for me to show my piety to the Lord! But mostly to convince Texans to catatonically keep me in the Senate. Donald, fellowship with the eternal is an intimate act, and you should never feel the need to show off in any way. [Screaming gibberish] ...Sanctified in the name of Christ! [Screaming gibberish] Brothers and sisters, I once was in the gutter, stricken with countless eradicated diseases. Then one day, a man by the name of the Reverend Dr. Donald J. Trump, Hallelujah, grabbed me by my thong! Hallelujah! And wedgied me into the light! He has saved us! Hallelujah! Ted Cruz!

Trump: Don't believe the dishonest media. I would never cut off God's penis. Unless God begged me like, "Please, son! Slice off my dong!"

Trump: They love me. I'm like Jesus, only with twice as many prostitutes.

But wait, there’s more! Trump signs a stack of Executive Orders to “mold our country into Christ’s beautiful image.” Pence recites each one, including declarations that no federal funds will go to Planned Parenthood, bakeries may deny service to men with torn jeans, people who make eye contact with ATM cameras will be investigated for prostitution, and the death penalty can be given for divorce. Yeah, Trump was cool with all of them until he got to the last one. Naturally, the media go nuts with charges of Trump turning America into a theocracy.

Meanwhile, the Trump sons are hatching up their own religion – Trumpianity. The main requirement is to make President Trump look good at all costs. Yes, it’s that dumb. There is even an egg roll competition on the White House lawn between Trump and Pence with the winner determining which is the true religion. The Trump sons say if Christianity is the true religion that Jesus will help Pence win but if it's Trumpianity, Trump will help himself win. Spoiler alert: Trump wins by cheating.

At the start of the race, Trump trips over a rock and God appears to him. But then Trump’s alter ego, a golf cart, crashes into God leaving him bloody with broken bones and convinces Trump to cheat.

Trump: Please, egg, don't tempt me into eating you.

God: Yes, my son. This game is not about winning. It is about putting your faith in the power of Jesus -- Aaaah!

Golf cart: Winning proves your worth! Do what you would do! Go smash that loser's egg!

Trump: I can't cheat. My supporters want a moral man.

Golf cart: They don't need you to be moral, Donald. They just need you to appoint judges that pose with machine guns in their Facebook photos.

Trump: But how am I going to get up?

Golf cart: You might need God for that one.

Trump: Eeeeehhyyaa! Thanks, Jared. I'll take the credit from here.

So, the alter ego breaks God’s legs and Trump cheats to win. That’s a really lousy Easter message. But that’s the point of this show – to show Trump, his family, his administration, his supporters, and Christians in the worst possible way.

Thankfully, the trailer for the next episode said it will be the season finale. Finally! Now, that is an Easter gift.