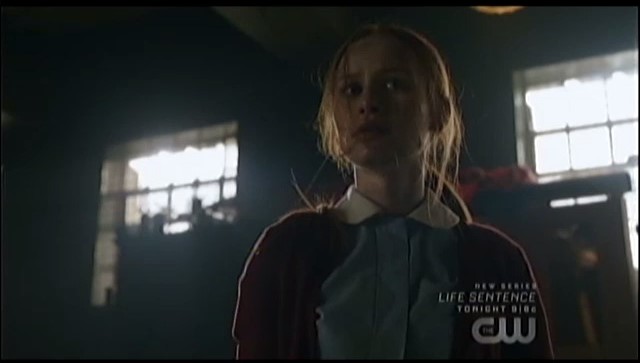 It is not unusual for the plots of episodes of CW’s Riverdale to take a turn into darkness, but in the March 28 episode titled “Chapter Thirty: The Noose Tightens,” the random inclusion of evil Catholics practicing gay conversion therapy was unexpected.

Penelope Blossom (Nathalie Boltt) is trying to gain control of the Blossom family fortune, now that she is widowed, but her daughter, Cheryl (Madelaine Petsch), and mother-in-law, Nana Rose, stand in the way. Cheryl has a preference for girls and currently has a crush on Toni Topaz (Vanessa Morgan). In order to dispose of Cheryl long enough to do whatever she is scheming for the money, she sends Cheryl off for gay conversion therapy at the Sisters of Quiet Mercy Home for Troubled Youth, which is portrayed as a dark, depressing place.

The therapy includes watching black and white cautionary films – remember Reefer Madness? – about homosexuality and Cheryl is made to do manual physical labor, like moving around heavy burlap sacks from one corner of the basement to another. Sister Livingston tells Cheryl she blames the simple act of dressing as a boy at the hands of her grandmother caused her to be confused and now gay. No, really.

Sister Livingston: I believe I've deduced what's caused this imbalance in you, Cheryl.

Cheryl: And what would that be, Sister Livingston?

Sister Livingston: I've spoken to your mother about your brother Jason. And how close you were. So close, in fact, that your Nana would sometimes mix you up, isn't that right? She would dress you in Jason's clothes and he in yours?

Cheryl: Nana's always been half-blind, Sister. Cataracts. But if there's anything that's affected my psyche, it's the fire hose of abuse directed at me by my mother and my father.

Sister Livingston: You've suffered many traumas, it's true. But that does not excuse your willful behavior. Now, you will report to the undercroft immediately, where you will undergo physical therapy until you're ready to listen.

Cheryl’s friends are not buying Penelope’s story that she has sent Cheryl off to a Swiss boarding school so they confront her. Toni, Veronica (Camila Mendes) and Josie (Ashleigh Murray) are then told by Penelope that she sent Cheryl away because she was afraid that Cheryl was obsessed with Josie and may even hurt her or herself. Then Penelope hands over a drawing Cheryl did of herself and Josie.

Not long after this meeting, Penelope leaves the house long enough for Nana Rose to get the idea of calling Cheryl’s friends to help get her out. She manages to fling herself from her wheelchair and pull herself across the room to the telephone to call Toni and let her know that Cheryl is nearby with the sisters. Cheryl’s Uncle Claudius, who is in cahoots with Penelope for the money, walks in and cuts the phone line so that Nana Rose can’t say anything more to Toni.

When they figure out that Cheryl is being kept at Sisters of Quiet Mercy, the sheriff’s son, Kevin (Casey Cott), who is gay, tells the girls about an underground tunnel that leads from the facility to the woods, which he knows about from gay boys sneaking out to hook up down there.

So they all go to rescue Cheryl from the evil nuns, culminating in a dramatic scene where Toni bursts into the film room to save a crying Cheryl and the girls kiss in front of the screen in front of everyone, then an angry group of priests and nuns chase them down the dark tunnel. Yes, it really was that ridiculous.

Cheryl, are you in here?

Toni: We came to rescue you.

Veronica: Cheryl, Toni, there are a bunch of nuns coming. We have to go, come on!

Of all the story plots that could have been used to get rid of Cheryl, I don’t really understand why this prime-time show had to go to gay conversion therapy run by evil nuns. Maybe it was just for shock value but mostly it came off as random and just silly. Usually, this show is better than that. I hope this is just a temporary lapse in judgment and not a preview of what is to come.