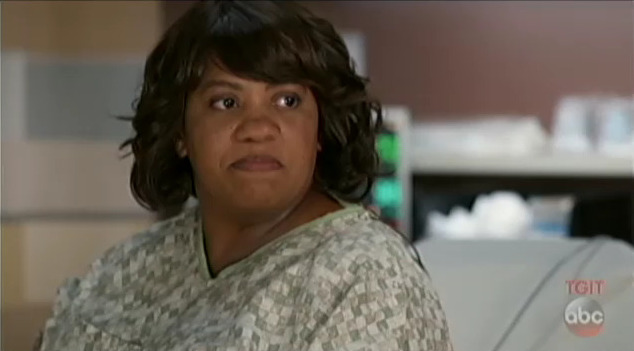 In the February 1 episode of ABC’s Grey’s Anatomy, Dr. Miranda Bailey, the Chief of Surgery at Grey Sloan Memorial, goes into a competing hospital, convinced she is having a heart attack. This episode is heavy with flashbacks as past memories are triggered by the experience.

Stressed to the max with her busy career, a child in school and a husband training to be a firefighter instead of remaining in his surgical career, Miranda (Chandra Wilson) suffers a heart attack. She initially believes the doctors at Seattle Presbyterian Hospital are not taking her concerns seriously. As she insists she is having a heart attack and demands more extensive testing, she flashes back to her childhood and the feeling that her educational and career goals were not supported by her mother. With great excitement, she tells her parents that she received a full scholarship to Wellesley College. When her mother is less than enthusiastic about her child going to school “6 hours and 40 minutes away” in Boston, Miranda reminds her that Wellesley is “a school of The Greats.” Then she rattled off a short list of liberal women including Hillary Rodham Clinton (naturally) and journalist Cokie Roberts.

Miranda: I got in! I got in! Full scholarship to Wellesley! Blue pride, baby!

Mom: 6 hours and 40 minutes away! Are you sure it's your first choice?

Mom: But it's near Boston.

Miranda: Can you be happy for me? For once?

The school choice and the liberal female alumni were completely random, I'm sure. Obviously, these names were included for the feminist angle but it felt like a stretch. The writers probably included that Miranda went to Wellesley just to name check Hillary. For instance, when talking to Dr. Larry Maxwell, Chief Cardiologist at Seattle Presbyterian, she brings up that he attended Yale Medical School but there was no mention of, say, George W. Bush or anyone else who also attended that Ivy League school. Her point to Dr. Maxwell was that he should have been more willing to do extensive testing though she wasn’t presenting typical heart attack symptoms.

A sexist and racist angle to Miranda’s illness was also brought up when she lectured a young doctor unconvinced that she needs more testing that women present heart attacks with different symptoms than men and African Americans have a higher rate of heart attacks. “I would take into consideration statistics that would never even occur to people who look like you,” she says.

Miranda proves she is having cardiac difficulties when she helps resuscitate a woman next to her in the E.R and then collapses. She is rushed to surgery and is shown recovering in the hospital at the end of the show. She does soften up a bit and comes to terms with dealing with the stress in her life. She asks her husband to build her a tree house to read books in and that's a step in the right direction.