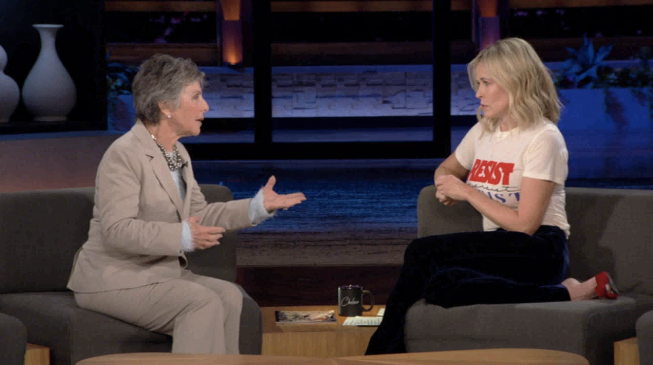 Former Senator Barbara Boxer (D-CA) was a guest on the December 8 episode of Netflix’s Chelsea titled “We All Have to Fight and Be Loud,” and she joined in on Chelsea Handler's brutal attacks on White House Press Secretary Sarah Huckabee Sanders.

During the interview, Boxer relayed the opinions of a psychiatrist who believes that President Trump has brainwashed Huckabee Sanders and turned her into "someone who is kind of cult-like.”

Boxer: I heard a psychiatrist speak the other day and he said when he looks at Sarah Huckabee Sanders he sees someone who is kind of cult-like.

Boxer: Yeah, he felt that way, the way she speaks, and as you notice, the antagonism she has for the press corps. It’s like everybody that [Trump] puts in a position is antagonistic toward the very job they have. She talks down to them. She doesn’t believe in freedom of the press, she says lie after lie after lie without even an expression on her face. So, I think it’s a very sad day for our country, not only to have President Trump but to have someone like that who doesn’t bring any independence or integrity to the job.

Doesn’t a former U.S. Senator realize that the press secretary’s job is to speak for the president, not for herself? Furthermore, she'd never admit this, but President Obama's White House was antagonistic and told lie after lie after lie to the press.

Chelsea somewhat addressed the outrage about last week's episode when she made fun of Sarah Huckabee Sanders' looks and called her a "harlot" and "a proper trollop" with "summer whore lipstick all over her face." She played a clip of Mike Huckabee's reaction in an interview on FOX News, then, commenting on the blowback she received for bashing conservative women while proclaiming herself to be a feminist, Chelsea gave a bizarre definition of the term "feminist."

Handler: ... I am a feminist who supports women who support other women and don't lie to the country... A feminist is somebody who sticks up for the people who are marginalized, whether that’s LGBT, Muslims, Mexicans, anybody who is marginalized in society is what I define a feminist to represent. Someone who goes and fights for them. That woman [Huckabee Sanders] is not a feminist.

Well, according to the Merriam-Webster Dictionary, a feminist is a person who supports feminism. Period. Feminism is “the theory of political, economic, and social equality of the sexes; organized activity on behalf of women's rights and interests.” Full stop. All those other labels Chelsea threw around don’t exist in the definition.

Boxer has been “reading a lot of history” since she retired from political office (better late than never, I suppose) and she thinks today’s politicians can’t get anything done “because it’s all tribal politics, it’s ugly, it’s horrible and every day we have a constitutional crisis.” Every day? That’s a lot of crisis going on, liberals must be exhausted!

As for today’s political atmosphere, she claims "it’s worse now” than during the Nixon administration. “All you have to do is look at this, a president who is in there now telling the people that the press is the enemy.” Chelsea Handler inserted, “A president who is campaigning for an accused molester,” to which the former senator replied, “The only president in history to campaign for an accused child molester. And he’s, let face it, the grabber-in-chief anyway.” Gosh, those history books are paying off. At least on Senator Al Franken Boxer said, “I think that he needs to go away.” #MeToo, Mrs. Boxer.

Naturally, though, Boxer had to qualify her opinion on Franken by saying, “It doesn’t compare to anything we’re talking about with Roy Moore, but still in all, we are now at the point in our history where let’s find someone else.”

Boxer says that 2018 is “our only chance to check this man (Trump), ‘cause the Republicans in Congress, Chelsea, except a very few, refuse to check him because they’re scared they’ll lose their seats.” She and Chelsea want to elect as many women to Congress as possible in 2018 but Boxer cautions “not every woman is good.” She referenced the examples of Sarah Palin and Secretary of Education Betsy DeVos as “bad” women.

After Boxer’s interview, there was an awful mock YouTube make-up tutorial by lesbian comedienne and actress Fortune Feimster. She pretends to be Sarah Huckabee Sanders as she exaggerates applying make-up. More feminism from the Chelsea show.

During the segment at the end of her show called Public Apologies, just in case you missed the whole accused child molester thing, Handler apologies “on behalf of Donald J. Trump. I’m sorry for endorsing accused child molester Roy Moore for the Senate. You know what they say, birds of a feather accused of rape together.”

Well, I for one am not at all sad that this episode is her last one taped in the Netflix studio. Next week she will do one of her dinner party episodes and then, my friends, we are all free from Chelsea on Netflix. Hopefully, she will keep her word and take next year off to do her political activism schtick and stay off weekly television. Good riddance to tired old Democrat talking points.