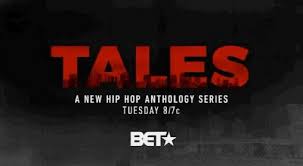 BET’s Tales is described as a scripted anthology series of "song stories" that uses hip-hop song lyrics to create mini movies. The October 24 episode titled “99 Problems” is based on the lyrics of the Jay-Z song and boy does it have problems!

The story is about two college students, a couple, who are Black Lives Matter (BLM) activists. They go on the lam when the mayor of their university town declares BLM a domestic terror organization.

The program opens with video of President Trump speaking to a police officer’s group, saying, “Please don’t be too nice” to the people they arrest. Next we see a montage of violence against African-Americans by police and protests, real mixed in with scenes from the show.

Mayor Crest (Mike Pniewski) and the city council declare BLM activists and supporters members of a domestic terror organization after recent protests gathered in the state-funded university’s public areas, which he said violated the school policy. Excuse me while I take a moment to catch my breath from laughing so hard at the idea of a city council having the power to declare organizations "domestic terrorists," never mind that this so-call ordinance was based on the violation of a school rule, not a real law - and how about the fact that a blanket school rule that bars any freedom of assembly at a public university would be unconstitutional in the first place! Next thing we know, a SWAT team is sneaking in the school with guns drawn, rounding up and arresting the BLM group for the crime of gathering in a crowd. Right, because that's all BLM does.

President Trump: You just see them thrown in, thrown in. Rough. I said, "Please don't be too nice. Don't be too nice."
President Obama: Law and order are the pillars of our civilization, ensuring the very structure of our democracy. Without it, we'd merely be beasts in the wild.
Mayor: At its founding, our state-funded university enacted a policy to ensure law and order on its campus. It stipulates that there should be no gatherings of crowds in its public areas. It saddens me to say that today that policy was violated, in the most offensive and unlawful way. Because of that, by unanimous decision, our city council has passed an ordinance declaring that all members, participants, and supporters of the so-called Black Lives Matter movement shall be declared domestic terrorists.
Germaine: And, so, it begins. Brothers, sisters, we are officially considered "Domestic terrorists." I am not sorry that I laugh at that, but I think that's just a little funny, 'cause I didn't know that a domestic terrorist was someone who educated their community. Because, actually, regardless of what they're saying, that's what you do here. That's what I'm talking about. So, if that is the new definition, then so be it. Y'all get ready for the goons and the dogs.
Miles: Hey! Hey! Hey! No! Here's the thing. Shit just got real. It's like my man Stokely Carmichael said, the scared --, they're dead. I ain't scared. Are you scared?
Crowd: No!
Miles:: I'm serious, pack this shit up and let's go!
Woman: Let's do this! Hey, Ashley, I need you to clear all computers. Yo! Yo! Yo! Swat is here, y'all! Swat is here! Okay, don't worry about that. I got it. I got it. I took care of it. Get outta here, man. Get outta here. Y'all gotta go.
Officer: Get down on the ground! Get on the ground! Hand up! Hands up! Nobody move! Everybody, hands on the ground! Freeze! Freeze! Don't move! Don't move! You're under arrest! We're cuffin' 'em up! We're cuffin' 'em up!

Miles (Peyton “Alex” Smith) and Germaine (Rhyon Nicole Brown) go on the run. They make it to a safe house and the mayor puts out an APB on them. Yes, really.

While in hiding, an anonymous source sends out a video of the mayor at a poker game. On the tape, he refers to American-Americans as monkeys. He refers to one of his employees, Edmund Benning (Jerod Haynes), as a good one, though. Germaine and Miles think for sure that they have the mayor where they want him. Then it turns out the anonymous source wants to meet with them and give them more material.

As you probably guessed, the source is Benning. He meets the two activists and justifies asking his friend, who was serving at the card game, to tape the mayor’s conversation. He says he's giving them emails and helping them "because I'm a black man in America. And this bullshit can't happen here again."

So, taking advice from Benning, the two go into the black-tie event to get more video evidence against the mayor. The theme is – wait for it – Make America Great Again. Of course. Guests can be heard making racist remarks and then the mayor comes out to make his speech. The speech is something straight out of any liberal caricature of President Trump - including the audience cheering slavery. At the end, an aide comes out to tell the mayor that the speech is live on social media.

Woman 1: They had a black man for at least eight years. I mean, if he couldn't correct their problems in all that time, then tough luck.
Man: They oughta just go on back to Africa. I hear you can get a good hut there for cheap.
Woman 2: If you're worried about increases in private prisons, just stop doing the crimes. Then we'll stop building the prisons.
Mayor: Hello, everybody. Oh, good to see everybody. Thank you. Thank you. I've gotta be honest with you, if I'd have known you guys cleaned up this good, I'd have called you in a whole lot sooner. You all look fantastic. Thank you so much. Thank you for being here. Well... We live in a different time, my friends. But I believe we have an opportunity to reset the balance. I believe that we have a moment to set a new pace for our great nation.
Germaine: We are live right now, and this bitch is goin' down.
Mayor: Say what you want about the Constitution. But our Founding Fathers didn't concern themselves with diversity, or political correctness. That's not my opinion. That's the truth.
Germaine: We got him.
Mayor: And say what you want about freedom of speech, and freedom of this, and freedom of that. But, hey, the Founding Fathers didn't even abolish slavery in the Constitution. Am I right?
Guests: Yeah!
Mayor: History tells us that every once in a while we have to cast a net and we have to grab those who would seek to disrupt the status quo.
Miles: We got him.
Mayor: I expect that other cities and other towns will follow suit with what we've done when they see how successful we've been. And before you know it, this Black Lives Matter terror organization won't matter to anyone at all. Thank you! Thank you all very much! Thank you! Thank you! Thank you! Thank you, everybody. Thank you very much. Thank you.
Miles: What? What's happening?
Mayor: I'm very sorry, my friends.
Germaine: We've gotta go.
Mayor: It seems our little gathering has become very popular on social media. So, please excuse me while I go deal with that.

The students are caught by security and roughed up. Then black kitchen staff fight off the white security men. How much more on the nose can we get?

Benning is found by Germaine and Miles as they escape the fundraiser. He’s on a park bench and his throat is slit. Later they find out that Benning sent them the emails, along with sending them to DOJ and the media. As they go back to meet at the safe house, older members tell them it is the “white supremacist militias in our government” holding African-Americans from getting ahead in America. Oh boy.

The DOJ moves forward and issues an arrest warrant for Mayor Crest. He is charged with money laundering. According to the charges, he is guilty of funneling funds raised for charity to "an alt-right terrorist group." Of course. He tells a reporter questioning him on it, "Get that fake news outta my face."

At the end of the show, viewers are told to contact the website PoliceAbuse.com if there are complaints against the police anyone wants to file. The claim that Black Lives Matter educates the public and therefore isn’t a terrorist organization is mentioned during the show. I guess this is the show’s way of educating their viewers, too, as one-sided as it is.

I got 99 problems but the truth ain't one.