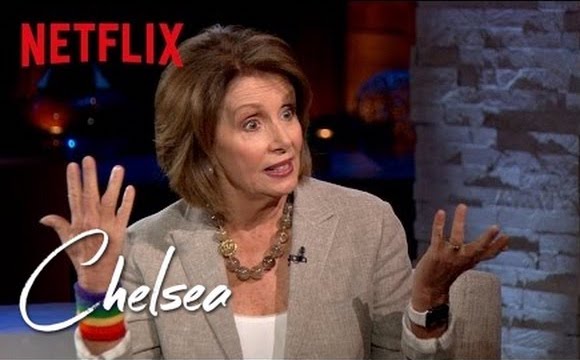 In the October 20th episode of Netflix’s Chelsea titled “Showing Up Matters”, House Minority Leader Nancy Pelosi talked about a White House dinner she recently attended. She demurely admitted she was the only woman at the table of Congressional and Senate leaders and then she proudly boasted that she corrected President Trump as he claimed to be the winner of the popular vote in last November’s election.

This dinner included members of President Trump’s cabinet who Pelosi trashed by saying they didn’t bother to listen to her. She said they were talking over her so she said, “What does a woman have to do to be listened to around here?” Trump, however, did listen to her, she admitted. She went on to declare that it is common for men on the floor of the House and in hearings to cut off women and “sometimes they just don’t want to hear what we have to say. That is it.” Really? The times I have seen women being “cut off” were for violations of decorum, same as men would be “cut off”. She says she corrected Trump at the table when she told him he didn’t win the popular vote but he reasoned that he believes that some 3 – 5 million voters “didn’t vote legally.”

Saying “we” (women) are at a pivotal point, she praised the Women’s March last January and called it “spontaneous, it was organic, it sprang from women wanting to go out there and talk about a woman’s right to choose, women’s health, issues that related to climate, gun safety, you name it.” Well, I think that was as good of a laundry list of standard leftist issues as any.

She spoke of the need to show up at rallies and to contact members of Congress about issues up for votes. She tossed out the quote from Abraham Lincoln that “public sentiment is everything” as it pertains to public opinion influencing legislation. At least she did credit Lincoln. She thinks the Democrats have the votes for legislation on DACA and gun control to go their way, if only Speaker Ryan would bring these items up for votes. Bless her heart.

Handler was eager to chime in that she is now working with EMILY’s List and devoting her life to political activism. To encourage more women to run for political office and be politically active, Pelosi says we need to "increase the level of civility in our discussions and lower the role of money in politics.” Lol! Remember when Pelosi referred to Tea Party movement as “astroturf” and accusing them of carrying swastikas? Do as I say, not as I do, I guess.

Of impeachment, Pelosi now says she has another ‘I’ word – intervention. “I think an intervention is really needed here. It’s about the law and what happens and that’s what you have to …The facts and the law and that equals grounds for impeachment or not. But I do believe that the president knows what he’s talking about and that’s why I say an intervention.” What? Talk about an answer full of jibberish. She never bothered to say what laws she thinks have been broken.

Pelosi’s parting message was to tell women to “know your power.” Chelsea chimed in with, “Girls need to stick together.” She was no doubt thinking of liberal girls because conservative, pro-life women weren’t even invited to that “spontaneous” Women’s March after the election.