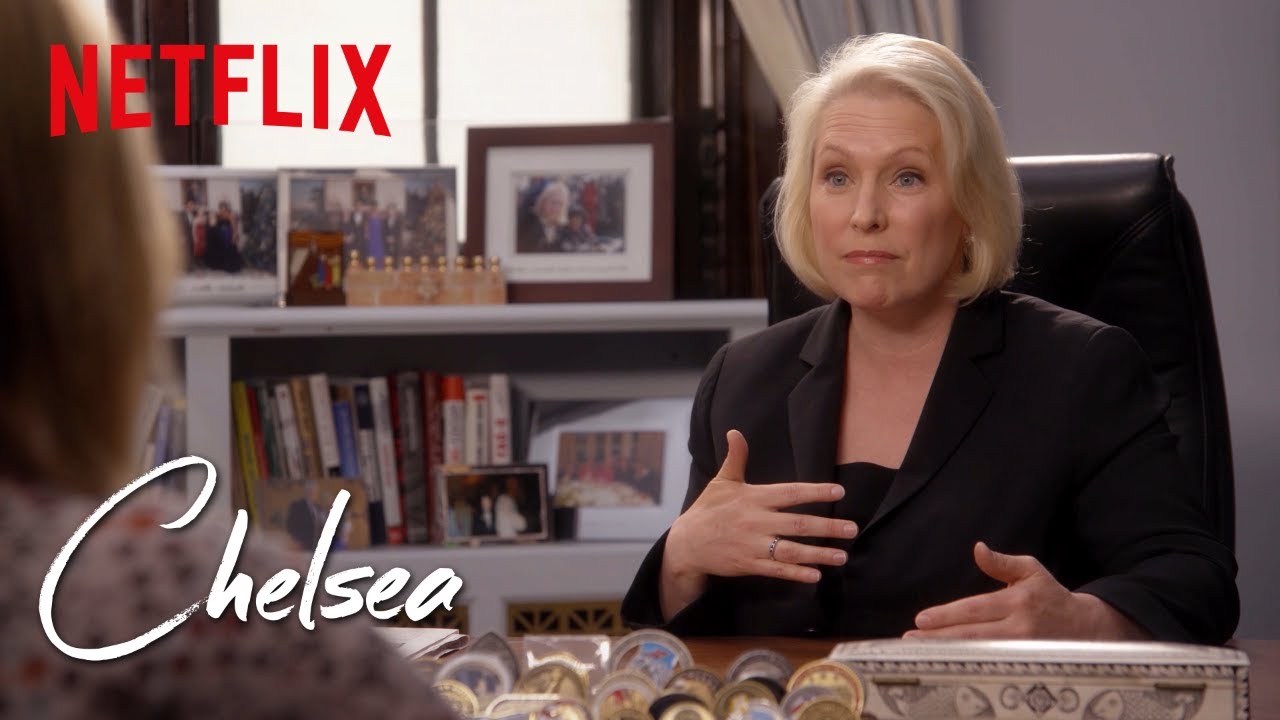 To hear New York’s junior senator, Democrat Kirsten Gillibrand, talk, you would think that the reason for random gun violence deaths was due to the sales of gun silencers. In the September 8, 2017, episode of Netflix’s Chelsea titled “Comfortably Naked,” Gillibrand describes the reason she left the ever-shrinking ranks of moderate Democrats to join in with the far-left wing crowd and, of course, it has to do with guns.

Chelsea Handler interviewed Gillibrand in her Washington, D.C. Senate office and the scene opens with the camera lingering oh-so-briefly on two photographs – one of Gillibrand with former First Lady Michelle Obama and one with the woman responsible for her move to the Senate, Hillary Clinton. Gillibrand was appointed to her seat when Hillary Clinton became Secretary of State.

When Handler asked Gillibrand why she left her more moderate positions as a Democrat on guns and same-sex marriage, Gillibrand chose to focus on guns. Sadly, she now sounds like every other anti-gun lefty in D.C.- it’s all about emotions and little about the U.S. Constitution.

Sen. Gillibrand: As a House member, the only lens I really saw guns through was the Second Amendment, that people loved going hunting. It was a very hunting culture. And I have to tell you, when I was appointed to the Senate, I had to learn really fast, and I went to Brooklyn, I met with a family. I can tell you how horrible it is to meet with a mother and a father who lost their daughter when a stray bullet ends her life when she’s just hanging out with her friends. And when you hear these stories, they are so horrific and you can imagine in your own mind what it would be like for your child to be taken from you by gun violence. And I just said, “I’m gonna do whatever I can to make sure your daughter’s life was not in vain and that, in fact, because of her death, we are gonna fight hard to make sure it doesn’t happen to some other child in our communities throughout our state.

Then, about the gun lobby, Gillibrand launches into an attack on the legal purchase of gun silencers, of all things. Ironically, she notes all the hoops to be jumped through for a purchase – paperwork and certification – then describes the purchases as though they are a free-for-all requiring no such requirements.

Sen. Gillibrand: The saddest thing about so much of what is wrong with this place is that it’s about money, and the gun lobby is literally run by the gun manufacturers. It’s not by hunters. It’s not about hunting. It’s about gun manufacturers who literally are now lobbying to make sure suppressors – gun silencers --- can be readily available. There’s restrictions on that. You can’t just go to a store and buy one. You have to be certified do paperwork all this kind of stuff. And, that’s made a difference. So, I talk to my police commissioner and I talk to law enforcement, they’re like “You’ve got to be kidding me. If you’re gonna make it easy for a criminal to buy a suppressor, it’s gonna make our job harder.” It’s ludicrous. But for the gun manufacturers, it’s just a value-add project. They would love to have people spend an extra 200 bucks every time they go into a gun store and buy a suppressor. So, that’s what’s …excuse my French. That’s what’s wrong with Washington, is that so much is based on money and who needs to be greedy and have a higher profit. It’s disgusting.

Confused by all that? Yeah, me, too. She describes the process of buying a gun silencer and then blames the store for selling it lawfully. Apparently, Gillibrand also isn’t a fan of capitalism or free enterprise.

At the end of this nonsensical ramble of an interview, Gillibrand expresses her disdain of the Citizens United ruling and her support of publicly funded elections. “I think if you got rid of the money in politics, you’d have better candidates running, more diverse candidates running, and you’d have much better outcomes.” I’m guessing when Barack Obama’s presidential campaign became the first billion dollar run, she wasn’t so anti-First Amendment.

It sounds like Senator Gillibrand is willing to circumvent both the First and Second Amendments in order to pursue ideological politics. That, to me, is disgusting.