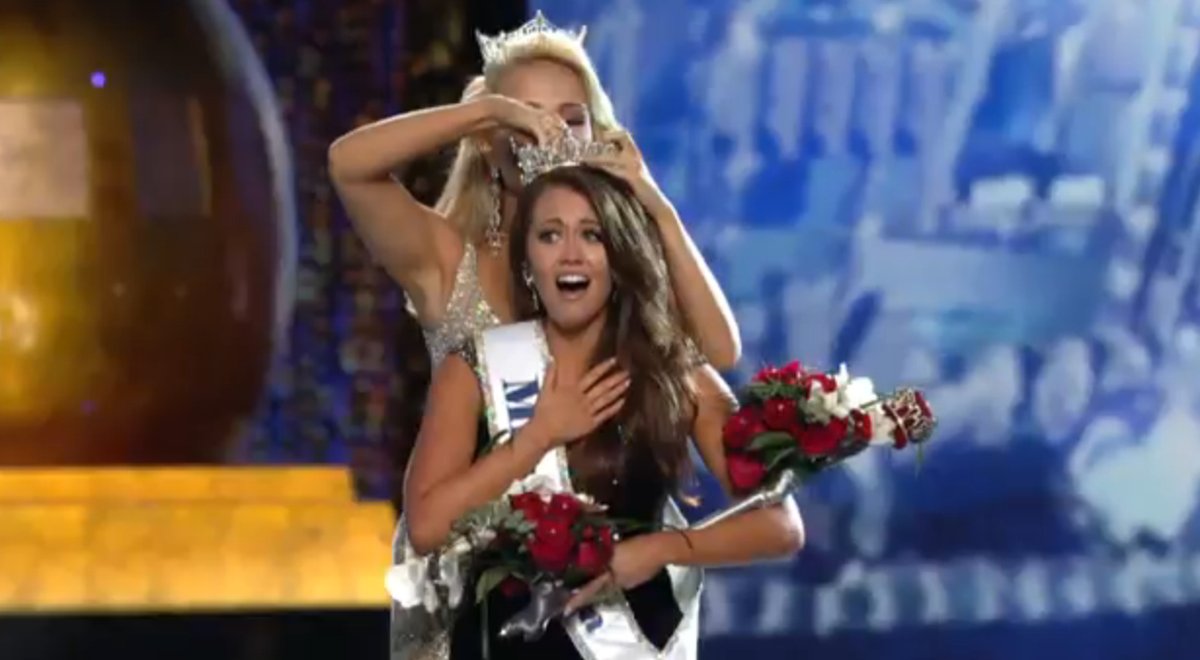 Though the ominous feeling of concern for those in the path of Hurricane Irma in Florida hung heavy in the air, the show must go on. Miss America 2018 on ABC aired September 10th and throughout the show, donations for hurricane relief were solicited for those affected in both Texas and Florida. Never fear, though. Politics dominated the final question competition and yes, it was all about President Trump.

Breaking with the tradition of one question per finalist in the final round of competition, this year the pageant decided to ask two questions of each – described as one serious and one playful. The serious questions were saved for the last five finalists. Four of the five questions were political.

It began with a question asked by judge Jordin Sparks to Miss Missouri, Jennifer Davis, about the multiple investigations into whether the Trump campaign colluded with the Russians - did Miss Davis think the Trump campaign was innocent or guilty? She said, “Innocent.” The crowd responded with mostly cheers. She said there wasn’t enough evidence but if the campaign proves to be guilty, the Justice Department should punish accordingly.

Sparks: There are multiple investigations into whether Trump's campaign colluded with Russia on the election. Well, did they? You're the jury: guilty or innocent and please explain your verdict.

Miss Missouri: Right now I have to say innocent, because not enough information has been revealed. We are still investigating this and I think we should investigate it to its fullest extent. If we do find the evidence that they have had collusion with Russia, the justice system should do their due diligence and they should be punished accordingly.

Miss Texas, Margana Wood, was asked by Jess Cagle about the Charlottesville protest with the KKK, white supremacists, and Antifa. Should Trump have said there were good people on both sides of the protest, he asked. Miss Wood gave a boilerplate liberal answer – Trump should have labeled the white supremacists as terrorists and made a statement sooner to make all Americans feel safe. She didn’t mention the terrorist actions of Antifa, though.

Cagle: Last month, a demonstration of neo-Nazis, white supremacists and KKK in Charlottesville, Virginia turned violent and a counter protester was killed. The president said there was shared blame with quote very fine people on both sides. Were there? Tell me yes or no, and explain.

Miss Texas: I think that the white supremacist issue, it was very obvious it was a terrorist attack. And I think that President Donald Trump should have made a statement earlier addressing the fact, and making sure all Americans feel safe in the country. That's the number one issue right now!

Maria Menounos asked the third question of Miss North Dakota, Cara Mund. The question was about the U.S. pulling out of the Paris Agreement on "man made climate change" and whether it was good or bad. Miss Mund said it was bad because she thinks climate change exists and the U.S. needs to be at the negotiating table.

Menounos: 195 countries signed the Paris Agreement, in which each country sets non-binding goals to reduce man made climate change. The U.S. is withdrawing from the agreement citing negligible environmental effects and negative economic impact. Good decision, bad decision? Which is it, and why?

Miss North Dakota: I do believe it's a bad decision, once we reject that we take ourselves out of the negotiation table. And that’s something we really need to keep in mind. There is evidence that climate change is existing so whether you believe it or not, we need to be at that table and I think it’s just a bad decision on behalf of the United States.

And, the last political question was delivered by Tara Lipinski for Miss New Jersey, Kaitlyn Schoeffel. Noting that over half of Americans want Confederate statues left in place, she asked if Miss Schoeffel thought they should be removed. Schoeffel said, yes, the statues should be removed, but placed in museums because we are, in fact, defined by our history.

Lipinski: A recent poll found slightly over half of Americans favored leaving confederate statues in place while others want them removed. Keep them or get rid of them? What’s your vote and why?

Miss New Jersey: I don’t think the answer is to get rid of these statues. I think the answer is to relocate them into museums. Because we are truly defined by our country's history, and I don't think it's something we need to forget. We need to always remember it and honor our history of America because it truly makes us who we are as Americans. But they should be moved to museums. Thank you.

Aside from declaring President Trump innocent until proven guilty, all the contestants toed the liberal, politically correct line. In the end, global warming alarmist Miss North Dakota was crowned the new Miss America.