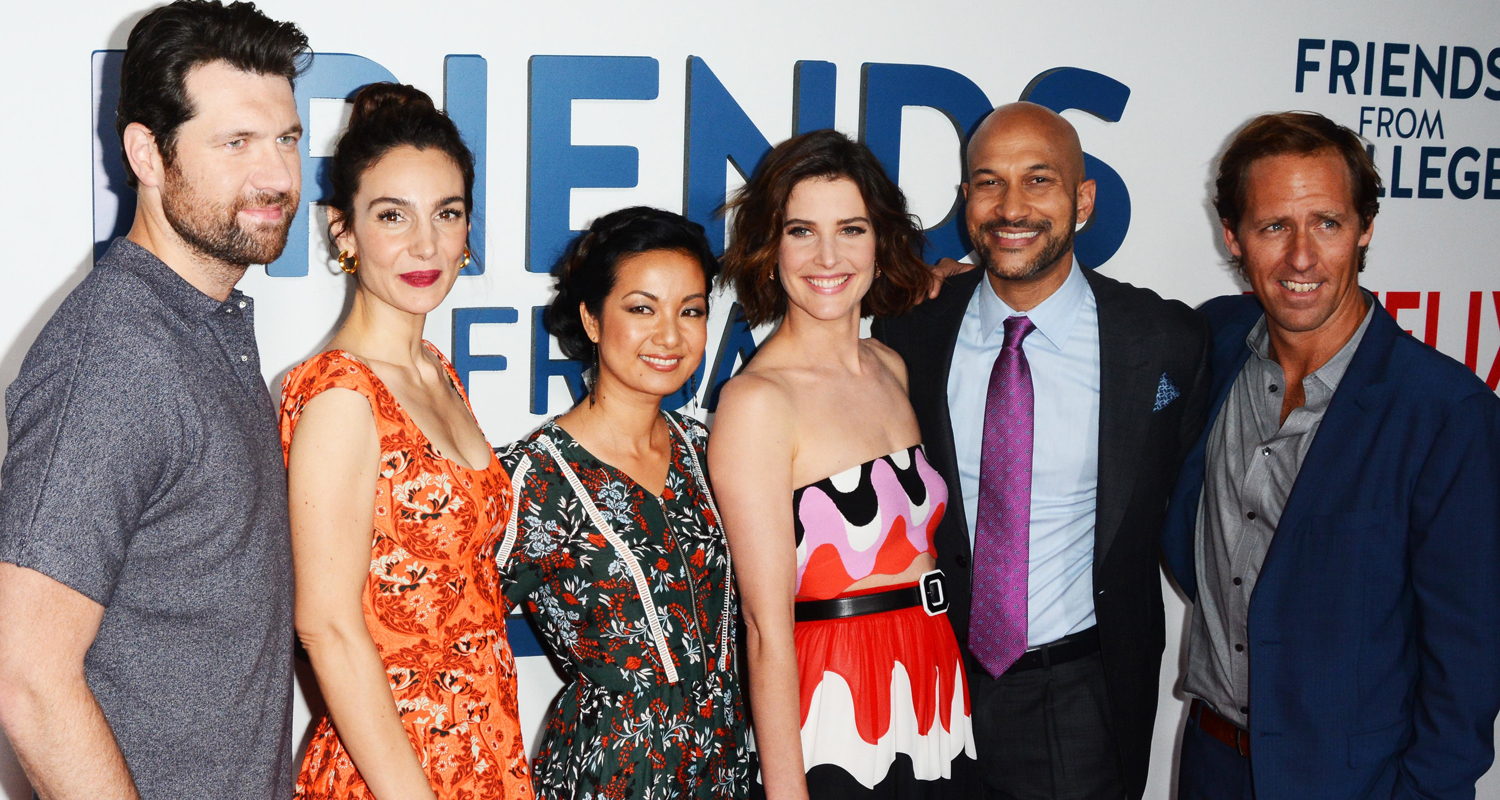 Netflix debuted its new comedy Friends from College on Friday, July 14. The eight half hour episodes revolve around a group of six friends that were Harvard classmates and are now struggling to come to terms with turning 40.

Trying desperately to put the "fun" in dysfunctional, the main story deals with married couple Lisa (Cobie Smulders) and Ethan (Keegan-Michael Key) who move back to New York and take up with their circle of longtime friends from college – just like old times except it is 20 years later. Ethan and Sam (Annie Parisse) have continued with their college affair all these years – she sees him when she is in his city on business. That’s especially awkward now with Ethan and his wife moving back to New York City. Ethan and Lisa crash at their actress friend Marianne’s apartment (Jae Suh Park) until they find a place to live. Max is the friend in publishing who is helping Ethan write his next best-seller and Nick is the perennial Peter Pan-type of single guy.

If this was supposed to be a modern day version of The Big Chill, it misses the mark. Sadly, none of these people are what anyone would consider good people. Mostly the show features the life of Ethan – he and Lisa are trying IVF treatments after being unable to get pregnant but he continues on with his longtime affair with Sam. He is trying to write his next bestseller but Max convinces him to move to Young Adult literature instead of adult fiction. He is in full-blown midlife crisis mode.

The plot points are all over the top. In episode two, “Connecticut House,” Lisa, a corporate lawyer, goes to work for a company being run by a group of men who are unbelievably crude and inappropriate to women and men alike in a professional setting. No corporation would be like that today, given the politically correct human resource departments running the world. It seemed like the writers were trying too hard to portray mostly white, corporate men as pigs. This episode also introduces Marianne’s latest gig as an actress – a reverse gender production of A Streetcar Named Desire. Of course. Marianne plays a male Stella. There is a violent rape scene in the play that was just too much.

Max, who is gay, has a partner named Felix. Felix is a doctor – a fertility specialist – and he is written as a cold, judgmental man unwilling to go along with the group that refuses to grow up. He accurately says the group is in a 20-year time warp. In episode four, “Mission Impossible,” Ethan and Lisa desperately throw a chair through the glass door of a clinic pharmacy to retrieve the fertility drug the night Lisa has to be injected with it. In episode five, “Party Bus,” the driver of the winery tour bus drinks with the group and passes out, leaving them to drive the bus themselves.

Occasionally humor does come through. The group performed a skit called Monica Lewinsky: The Musical, during their Harvard days and Max tries to re-introduce it at a wedding reception. Ethan’s impersonation of Bill Clinton is amusing. Too bad they don’t actually perform it.

Episodes seven and eight are dramatic episodes. Lisa goes to the Cayman Islands on a corporate trip and friend Nick tags along. Suspecting Ethan’s cheating with Sam by now, she has a fling with Nick. Guilt overtakes her and she decides to come clean with Ethan upon her arrival home. Sam also begins to have guilt over her affair with Ethan and tells him it’s over. The last episode is number eight, “A Night of Surprises,” and it is Sam’s 40th birthday party. The adultery of Sam, Ethan and Lisa all comes out and Lisa tells Ethan they should take a break. So, no happy ending for this show.

Friends from College is a fast-moving binge watch but it gets so tedious since the main plot revolves around adultery. The group of friends are all intertwined yet it is so destructive. And, as I said, none of them turn out to be good people. At least Marianne ends up finding her rabbit after Ethan lost her in episode two.

This is one group of friends you don't want to keep.