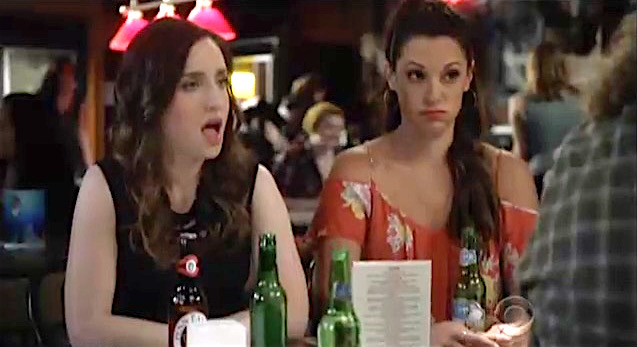 In Story 4: “Ladies Night” of Thursday night’s episode of CBS’s Life in Pieces titled “Dinner Professor Steps Lesbian,” Dougie (Fortune Feinster) realizes she is a lesbian even though everyone around her could have cracked this mystery for her from the get-go.

Calling a meeting with her roommates Colleen (Angelique Cabral) and Matt (Thomas Sadoski) to break the obvious self-revelation to them, Dougie says she first told Pastor Todd her news. Needless to say, Colleen and Matt are anything but surprised by Dougie’s confession. She admits it was during a night of sex with a man that she realized she’s gay. She rationalizes that she must have been stuffing her feelings down up until now. Then she asks Colleen and Matt if they can tell her how to “start a lesbian journey.” That’s right – she asked a straight couple how to be a lesbian. She hasn’t even kissed another woman but this feeling convinces her she is a lesbian, so Colleen suggests a girls night out at a lesbian bar by the airport with Jen (Zoe Lister-Jones) and Heather (Betsy Brandt) coming along, too.

Desperately trying to kiss a bar patron – any woman would do, just to get that first kiss out of the way – Dougie soon finds out that it isn’t so easy to check this task off her to-do list. Heather confesses that she has never kissed another woman, either, and her husband would be cool with it if she did. Jen tells Heather that “dipping a toe in the lady pool isn’t cheating.” After Heather is shot down by a woman she was pursuing for a kiss and Dougie strikes out, too, they soon solve the problem. Dougie kisses Heather. Then Dougie says that sound they all just heard was the sound of “her lady cork popping.” Eww.

Heather:  Totally struck out. Am I not appealing to women?

Dougie: You're appealing to me.

Dougie:  Did you guys just hear that? That is the sound of my lady cork popping.

There is something slimy about encouraging a woman to enter into a lesbian lifestyle when she is obviously clueless about her own sexuality. Justifying straight women kissing other women while saying it isn’t really cheating on their husbands is just not something I remember hearing as a part of traditional marriage vows.