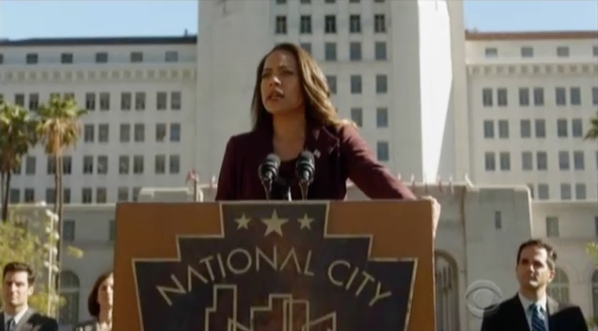 In tonight’s episode of CBS' Supergirl, “Strange Visitor From Another Planet,” Senator Miranda Crane (Tawny Cypress) portrays a "bigoted" anti-alien politician rallying supporters with a message that monsters are coming for the families of National City.

Clearly, Senator Crane is written to take a swipe at American politicians like Donald Trump who denounce America’s open borders. Instead of a wall on America’s southern border, Senator Crane promotes building a dome. Crane is called a "bigot" who is "anti-alien." Because she is a parody of what the liberal writers think those who oppose illegal immigration are like, she lumps all aliens together; not even National City’s own Supergirl escapes the wrath of Senator Crane. (Typical of liberals to not make the important distinction between legal and illegal immigrants.)

Crane: Thank you. Thank you all for coming. Aliens. Extraterrestrials. Non-humans. Whether they're wearing a red cape or not, they are a threat to this country, our freedom, and our lives. Starting today, we need solutions.
Alex: The perimeter is clear.
Hank: Try it again.
Crane: We need to know where they live, what they do and who they eat. Most importantly, we need to stop them from landing in our country. If it takes a dome, let's build a dome. It's time to stop talking and start acting. Monsters are coming for your families. (Crowd screaming)
-Move, move, move! -Everybody get down!

After Senator Crane is captured at her rally and taken by the White Martian, a member of the alien race responsible for killing Hank’s (David Harewood) people, she must be rescued by Supergirl.  During the hunt to save her, it is discovered that the White Martian shape shifted into the Senator – the implication being that an anti-alien politician is evil, right?

In the end, Senator Crane sees the light and realizes that illegal aliens are not so bad after all. Like a squishy politician, she decides to call off her original anti-alien initiative in favor of a more politically correct version. Just like the liberal candidates today, she labels a desire for secure borders as "letting fear dictate our future."

Crane: I know many of my supporters are surprised to hear that I'm revising my stance on the anti-alien initiative. While it's important we remain cautious, we still have a lot to learn before we take action.
Reporter: Senator, this decision is in light of an alien at your rally. What changed?
Crane: Supergirl. She apprehended my attacker and saving who knows how many lives. Her efforts to protect me and National City taught me that not all visitors to our world are the enemy. And as a nation, we cannot let fear dictate our future.
Cat: Ker-rah, get me the Senator, I wanna do an interview for our lead story.

A little Easter Egg: The title of this episode was also used in the old ABC show, "Lois & Clark: The New Adventures of Superman."