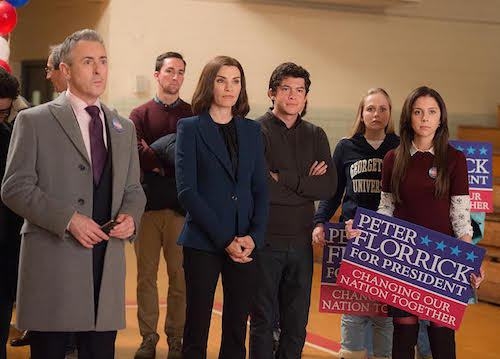 In the episode “Iowa,” CBS’ The Good Wife continued its pursuit of painting Hillary Clinton as the inevitable Democratic presidential candidate.

On the eve of the Iowa Caucus, the Florrick family and advisers are on the campaign bus debating the pros and cons of doing a “Full Grassley.” (A Full Grassley means stopping in all of Iowa’s counties during a campaign cycle and is named after Iowa Senator Chuck Grassley). Ruth (Margo Martindale) is pushing for Peter (Chris Noth) to agree to the Full Grassley over objections of others who prefer to use computer models and micro advertising to target voters.

In order for Ruth to win the argument, she pulls out the example of 2012 GOP candidate (and current 2016 candidate) Rick Santorum. There’s a blatant re-write of history, though, because it is CBS, after all. Crediting the full Grassley, Ruth states that Santorum came out of nowhere in the polls to losing the Iowa Caucus by eight votes. He didn’t. After the Santorum campaign demanded a recount of caucus votes Santorum was, in fact, declared the winner, just before the South Carolina primary.

Really?  The writers are too lazy to get the story straight?

Ruth: Candidates have proven that completing the "Full Grassley" translates to huge support. Rick Santorum did it, and went from dead in the water to coming within eight votes of winning the state.

Josh: And by the spring, he'd dropped out of the race.

Describing the Iowa Caucus system as “old style Athenian democracy” to Florrick’s teenage children, complete with a quick swipe at the GOP’s secret ballot system, Ruth points out the other candidates’ corners and supporters. There were no supporters at the Florrick corner, so the troops had to rally to get the necessary 29 voters to prove viability.

Ruth: But Iowans are savvy voters. If we lost some votes, this is our shot to get them back-- right here on the caucus floor.

Grace: Oh, wow. I did not expect it to be this crazy.

Ruth:  Unlike the GOP, Democrats don't do secret ballots. This is old-style Athenian democracy.

Ruth: Athenian democracy. Literally, a gathering of neighbors trying to convince each other to support their candidate. Every candidate has a corner. Okay, that's Hillary's corner. (People chanting): Hillary! Hillary! And there's Bernie's. (Chanting): There's no debate. Bernie's great, great, great! Eh, oh, and those are the people for O'Malley. (Chanting): Martin O'Malley! Martin! O'Malley!

Hillary won, of course, and Peter Florrick placed fourth in the Iowa Caucus. Stick a fork in him, he’s done. You didn’t really think CBS would present a scenario showing Hillary as a loser, did you? Not even in a fictional story.