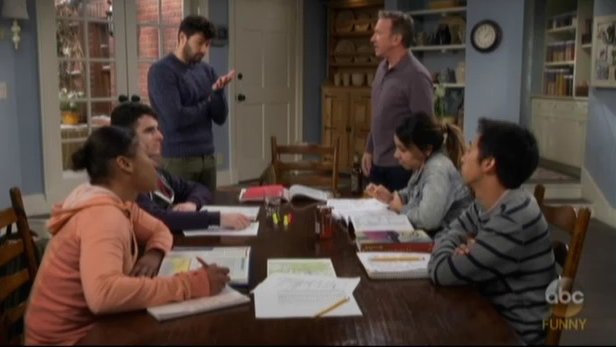 On Friday’s episode, “House of Tutor,” Vanessa Baxter decides to hire self-proclaimed progressive son-in-law Ryan (Jordan Masterson) to work as a tutor for her company.

Mike Baxter (Tim Allen) walks in while Ryan is teaching about America in the 1980s. When he shares his affinity for Reagan’s administration, Ryan interjects with his lefty rebuttal.

Ryan: Okay.
Mike: Just out of curiosity, what are you teaching?
Ryan: Uh, America in the 1980s.
Mike: Oh! Reagan era. One of the best presidents the U.S. has ever had.
Ryan: Really? What about his assault on the poor or his union busting or how he exploded the national debt? Mike: Assaulting, busting, exploding -- sounds like a doer to me.
Ryan: Well, by that theory, the best president would be the Tasmanian Devil.
Mike: Wouldn't be the first president born outside the U.S.
Ryan: Yeah, very funny, Mike. Look, I got a class to teach, so if you wouldn't mind.
Mike: Yeah, you won't even notice that I'm here.

Ryan’s rampage didn’t stop there. He later continues his tarnishing of Reagan's record, even belittling his efforts towards ending the Cold War.

Mike: That's how Reagan ended the Cold War. I'm sorry your side lost.
Ryan: I'm not a Communist. I'm Progressive.
Mike: You say potato, I say Spud-nik.
Ryan: Yes, Reagan was partially responsible...
Mike: Right, right, right. ...
Ryan: For ending the Cold War. He was also responsible for putting millions of people out on the street.
Mike: What are you talking about? It was the most prosperous time in American history. Everybody I know owned a boat.
Ryan: Yeah, it was good if you ran a big corporation 'cause Reagan slashed their taxes.
Mike: Slashed taxes so you could hire more workers. More workers, more jobs.
Ryan: Oh, except they didn't. They just kept it for themselves and bought more boats.
Mike: Oh. Boats?! But they were American-made boats, probably.
Ryan: Yeah, and then thanks to Reagan's deregulations, they all sank.
Mike: Okay, you got to stop teaching this lefty stuff. You know why? They're gonna -- They're gonna fail these tests because my side's still writing the textbooks.
Vanessa: Mike, Mike, Mike. What -- What are you doing in here? This is a classroom. It's not a –
Mike: Kitchen?
Ryan: I was trying to teach.
Mike: No, you weren't. He was trying to throw his -- his lefty-sidedness. I was just tr—
Vanessa: All right, you know -- Hey, guys, you know what? If you want to leave a little bit early, it's okay.

Leave it to a hippy teacher to bash one of most popular and effective presidents in modern times to impressionable school children who don't know any better! The sad part is the textbooks are already being rewritten by leftists. Mike does get in a good punch later when he refers to Ryan as “Deng Xiaoping.”

Reagan's presidency is legendary, and Hollywood, of course, tries to find a way to focus on the negative. At least we have Mike Baxter as the last man standing at ABC willing to defend him.