It seems that conservatives aren’t alone in the bashing of the lying, biased media. The Simpsons did a storyline on how not everything we see, read, or hear on the news can be counted as credible in the episode “Trust but Clarify.” Of course, they did lean a tad to the left. Anyone surprised? Didn’t think so.

Kent Brockman, news anchor for the local Springfield news, is being interviewed on a late night talk show about his stories in dangerous war zones. Later, he admits these are lies, and gets fired. (Clearly a play on former NBC Nightly News anchorman Brian Williams’s apology for lying last year.) Kent meets with his agent to discuss his options. When he mentions Fox News, his agent has a snide remark.

Kent: So much great work for naught.

Agent: Kent, as your agent, I promise we will find you something, or so help me, we will drop you. That's a promise.

Agent: Would you be willing to call yourself a liberal and lose every discussion?

Kent: Every single one?

Meanwhile, Lisa does some investigative work on Krusty’s new candy, Krustaceans, as they make others feel ill. She discovers they are made with chemicals and are in fact poisonous. She brings this information to the news station, but is turned away as Krusty is their biggest star.

Lisa finds Kent and has him do the bit on Krusty, getting his job back at the station for being honest. When he kicks his replacement off the show, he makes a comment about watching Fox News for the six weeks he was out of work, “Sometimes I'd watch Bill O'Reilly and pretend it was an older, stupider version of me.”

During his interview, a veteran’s bar called “Veterans of Unpopular Wars (VOUW)” is shown watching. An Iraq veteran claimed he never saw Kent in Iraq, only to be mocked by Grampa Simpson who claims the Iraq veterans complain too much.Later, Kent confesses his stories were lies this way:

Kent: I'm sorry to report to you that over the years, every interesting thing I've done is, in fact, a complete lie. I did not land a Chinook helicopter. I did not see bin Laden die, or even see the movie about it. Now that I've apologized, my station has assured me that it has full confidence...

Arnie: These were the last words of disgraced anchor Kent Brockman before he was escorted out by security and replaced by me, Arnie Pye. This reporter promises to restore our news department's credibility. In our top story, corporate taxes are too high. 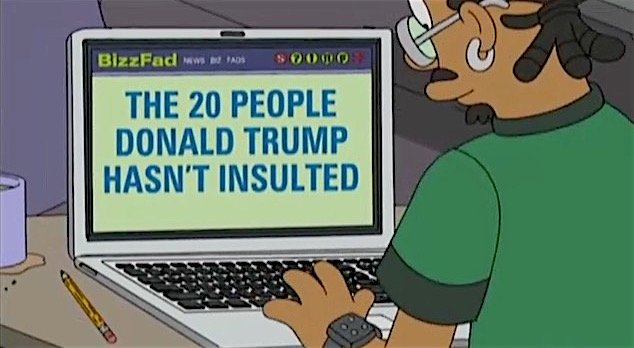 Upon being fired from the station for his lies, Kent is replaced and has trouble finding work. He tries to produce his own news content by interviewing Homer Simpson but Homer says, “Forget it. We only like newspeople we can trust. So no newspeople!”

He interviews with Bizzfad (play on Buzzfeed) in hopes of bringing his experience and knowledge to aid in their news-writing style, only to find out they’ve gone bankrupt. It should be noted that while at Bizzfad, an article can be seen that says, “The 20 people Trump hasn’t insulted.” Thanks for adding that in two weeks prior to election day.

It’s clear the writers on The Simpsons have always, and will surely continue, to favor the left and bash the right. After all, this show has been around since 1989 and doesn’t show any signs of ending. Hopefully its viewers investigate the real truth about the media right here on MRC and the leftist lies and propaganda are exposed for what they are.