Carlos Sainz Jr. and Team Ferrari won the British Grand Prix on Sunday, and Lewis Hamilton earned his 13th podium finish at the Silverstone Track, a record for podium finishes at any one track. 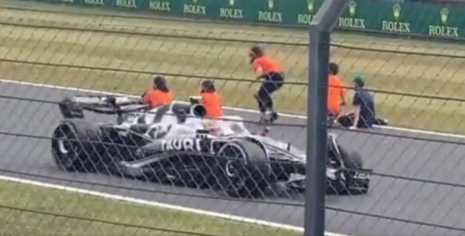 But that was all overshadowed by a group of six “Stop Oil” climate change protestors who laid themselves down on the racetrack.

During a stoppage in the race after Zhou Guanyu's first-lap crash, the protestors nearly blocked the entire race track as the cars whipped by on their way to slow down after the crash.

Footage of the race shows the protestors were not far off from becoming roadkill before getting arrested.

Hamilton voiced his support for the protestors, who’s cause has gained widespread popularity throughout the sport in recent weeks.

"I love that people are fighting for the planet and we need more people like them,” the seven-time world champion said.

While there are certain ways in which countries around the world could be doing a better job at stewarding its natural resources, the world is not on the brink of extinction like these protestors would have you believe. Plus, if their methods of protesting have reached the point of potentially causing accidents and major loss of life, then they have completely lost their right to be taken seriously.

This whole narrative is a sham and so are the people that protest in it’s name. The only sane response is: "Gentlemen, start your engines."