It’s not often that Stephen A. Smith says something intelligent, so when he does, it’s worth writing about. 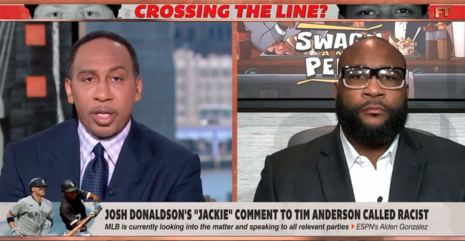 The host of First Take discussed comments made by New York Yankees third baseman Josh Donaldson on Saturday during their game against the Chicago White Sox.

Before the benches cleared for both teams in the fifth inning, Donaldson and White Sox shortstop Tim Anderson (both of whom are very brash and high-energy individuals) talked smack in the early stages of the game.

When Donaldson stepped up to bat in the fifth inning, White Sox catcher Yasmani Grandal confronted Donaldson, tensions escalated, benches cleared, and Anderson had to be restrained from getting up close and personal with Donaldson.

Grandal and Donaldson exchanged words at home plate, benches cleared, TA had to be restrained 😳 pic.twitter.com/3OgsVivV7U

The tension arose because Donaldson had been calling Anderson (who is black) “Jackie” during the game, in reference to the first black baseball player in the MLB. The shortstop called the comments “disrespectful” and “unnecessary,” and White Sox manager Tony LaRussa called them “racist.”

But Smith doesn’t see eye to eye with that assessment, saying that Anderson shouldn’t feel slighted by the comments at all. Additionally, Donaldson said that it was part of a multi-year, inside joke between the two that up until now had not bothered Anderson.

“I think that it is actually wrong for people to attach racism or 'racist' to Josh Donaldson today or for this incident,” Smith said. “He said he had said this to Tim Anderson on several occasions in the past, both of them had joked about it, and it was fine. So if that’s true, how come Tim Anderson hasn’t talked about that?”

Good point, Stephen A. Plus, it’s not like Donaldson came up with the nickname on his own. In fact, Anderson said three years ago that he viewed himself as the next Jackie Robinson because he felt he was in a position to make the game more fun.

“I kind of feel like today’s Jackie Robinson,” he said in an interview with Sports Illustrated in 2019. “That’s huge to say. But it’s cool, man, because he changed the game, and I feel like I’m getting to a point to where I need to change the game.”

Furthermore, in April, he viewed himself as a catalyst and source of inspiration for the next generation of black baseball players in a league where inclusivity is apparently an issue (despite the fact that nearly 40 percent of all players on Opening Day rosters in 2022 were players of color).

"I'm very aware of what comes with the things I do," Anderson said. "There's a lot of kids watching. I want to make sure I leave the right message for them, also lead them in the right direction."

With all of this information providing some context for Donaldson’s remarks (regardless of if they were tasteful) and getting an insight into Anderson’s mind as to how he views himself in stature in today’s game, it looks like Anderson needs to do an ego and emotions check.

Looks like Stephen A. might be the most discerning guy in sports media right now, and that's saying something given his history of wild and wacky comments.