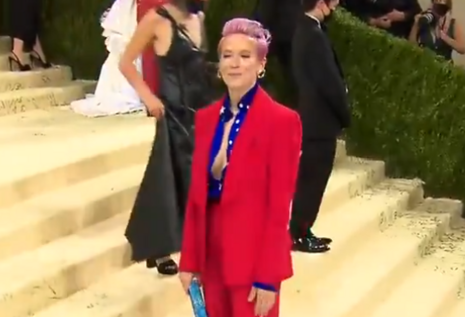 Monday night’s Met Gala was a cesspool of rich politicians and celebrities showing off their wealth and status to compete for media attention. While Alexandria Ocasio-Cortez stole the show a gown with the ridiculous message “Tax The Rich” painted on it, U.S. Women’s National Soccer Team star Meghan Rapinoe had an equally nauseating message to convey at the gala.

Rapinoe, a staunch supporter of LGTBQ+ rights and any message that is anti-America, walked into the gala in an American flagged-themed pantsuit holding a clutch bag that said, “In Gay We Trust.” It clearly was a jab at our nation’s motto, “In God We Trust.”

In 2019, the perpetually aggrieved Rapinoe told NBC why she finds it so important to be vocal in her support of the gay agenda:

"We're unfortunately constantly being oppressed in some sort of way. So I feel like us just being athletes, us just being at the pinnacle of our game is kind of a protest in a way and is sort of defiant in and of itself," she added.

Rapinoe’s view of America is so misconstrued and idiotic on so many levels.

First, disrespecting our nation’s motto in this way is infuriating. Our nation was founded on the belief that God gave us our inalienable rights to life, liberty, and the pursuit of happiness. With this in mind, our founders created a government that does seek to ensure that for all. To say that trusting in gayness or people who are gay instead of God in order to create a better order for our country is one of the most infuriating things a liberal has done in recent memory.

Second, what more does Rapinoe need to defy? It seems pretty ironic that a woman who has won multiple gold medals at the Olympic level and who has an estimated net worth of $3 million would claim that she is oppressed. Women --- of any sexual orientation -- in Taliban-controlled Afghanistan would love that oppression.

Gays are not oppressed people anymore. When you have an entire month of the year dedicated to celebrating you, businesses change their logos to rainbow colors, and sports leagues are hosting “Pride Nights,” you have lost the right to foolishly claim that you are oppressed. You are anything but.

In a nutshell, Rapinoe’s actions display classic leftist tactics to get their agenda approved: claim oppression, say America is the problem, and then get what you want.

Unfortunately, Rapinoe will likely keep spewing nonsense like this for many years to come. All we can do is take her arguments for what they and not allow her and others to tell us that America needs to be fundamentally changed.