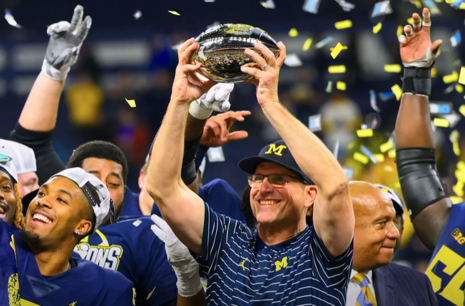 All four of the teams that qualified for this season’s college football playoffs have earned the seal of approval for their devotion to the LGBT mafia. Forget the on-field action to come, Michigan, Georgia, Texas Christian and Ohio State have “distinguished histories of embracing LGBTQ people in athletics,” raves Alex Reimer, deputy manager for Outsports blog.

“As one of the most high-profile figures in football, Jim Harbaugh’s love for his son goes a long way towards combating homophobia in the sport,” Reimer gushed. “Michigan has done its part, too. Last year, the school’s marching band performed an LGBTQ-themed halftime show at The Big House.” Great credentials and kudos to the Wolverines! (Interesting, though: Harbaugh is an outspoken pro-lifer. Maybe a fondness for show tunes is a get out of jail free card? We'll have to check the intersectionality rules.)

Michigan will play Texas Christian in one of the New Year’s Eve playoff games, and the religious school escaped condemnation from Outsports for its “laudable history of supporting LGBTQ people on campus.”

“As some Christian universities continue to discriminate against LGBTQ students, TCU stands out as an example of inclusion right in the middle of Texas,” Reimer writes. Years ago, TCU’s homosexual assistant athletic director Drew Martin found acceptance and love in the athletic department, “even while he couldn’t marry his partner in Texas.”

A former out TCU swimmer, Cooper Robinson was pondering suicide. He credited his coaches and teammates for saving his life.

“I ended up telling my coach everything. Soon we were all crying. All of my coaches embraced me with their support and care. It was like something changed and I didn’t really care what people thought of me anymore. I was able to be more open with myself and the rest of my swim team. Since then I have felt nothing but support from them.”

We’re thankful Robinson chose life, but his sob story has nothing to do with the Horned Frogs’ presence in the 2022 football playoffs.

Grab a tissue while we forge on in the Outsports review of football playoff teams’ cozy relationships with LGBT fascists.

The Ohio State University’s Athletic Director Gene Smith, in 2013, spoke with Outsports about combating homophobia, becoming one of the first major college sports figures to grant Outsports an exclusive interview in the process.

Former Ohio State football coach Jim Tressel said in 2010 he would embrace an out gay player on his team. “We strive to teach and model appreciation for everyone,” Tressel commented. “One, we are a family. If you haven’t learned from your family at home that people have differences and those strengthen the whole, then you are hopefully going to learn it as part of the Ohio State football family.”

Ohio State is truly a welcoming university for LGBTQ athletes (or fearful of being canceled by left-wing cancel cops). An out gymnast served as a senior captain, homosexual swimmer Nathan Holty found “safe space” in the pool and two out students were part of the institution’s cheer team. All of this is supposedly cause for celebration and further justifies the Buckeyes’ place in the 2022 college football playoffs.

And the team Ohio State will meet up with come New Year’s Eve, Georgia, isn’t just No. 1 for its football skills. The undefeated and defending national champions are also on board with the gender bender agenda.

In fact, former Georgia goalie Joey Fisher was among the first out athletes to tell his story to Outsports – several years ago.

Fisher said: “Everyone was really good about it. I was really surprised. I kind of expected to have at least one negative reaction. But, for everyone it seemed to either be a non-issue or they were just like, ‘Hey, it’s really cool you’re still here doing this.’”

Georgia also earned its LGBTQABCDEFG spurs because straight athletes serve as allies to the sexually confused. Chris Conley was a wide receiver for the Bulldogs, is now a member of the Tennesse Titans, and he “embodies what allyship means.”

Reimer praised Conley for speaking out in support of homosexual athletes at a time when teammates were silent on the subject. He also attended an LGBT sports conference while he was a student at Georgia, scoring more points with Outsports with his appearance.

There you have it, the story of how this year’s college football playoff combatants stack up in the alphabet mafia’s wacky judgement.