Not Again! Media Call For Return Of Super-Woke Kaepernick 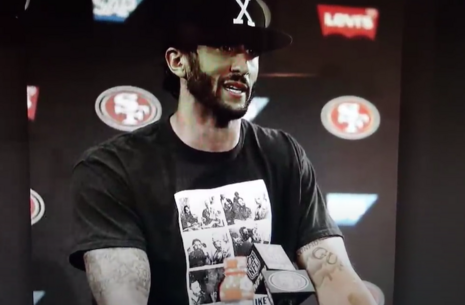 That sound just grates on a person like someone scratching a blackboard with fingernails. It’s the annual media call for the return of “Super Wokeman” Colin Kaepernick. This time it’s coming from Eliot Shorr-Parks, host of the Audacy Original Podcast, “The Best Football Show”.

Shorr-Parks says the San Francisco 49ers, who have lost quarterbacks Jimmy Garoppolo and Trey Lance to injuries, should give Kaepernick another chance. Fanboys like him over-inflate Kaepernick’s potential, stretching it to legendary proportions with each passing year.

Either Kaepernick or the retired Drew Brees could put San Francisco in the Super Bowl. It’s just that easy, Shorr-Parks' fantasy goes:

And then of course there’s the Colin Kaepernick thing. He’s played for the Niners. He could bring a dimension to that offense that they don’t currently have with a running quarterback. And he could also do the sit back in the pocket and just get the ball to Deebo, get it to Christian McCaffrey, get it to George Kittle.

This would be a “fantastic story” if the 49ers give Kaepernick another whirl, seven years after the two parted ways following the stormy season of 2016, when Kaepernick trashed America, cops, the flag, his adoptive white parents, et al, and shilled for Cuban communists.

Shorr-Parks gets carried further away by saying Kaepernick was there on the Bay, “He’s taken them to the Super Bowl before” (52 other players did a lot of the heavy lifting for that to happen). “He has playoff experience. And I would be really interested in seeing him with a head coach like Kyle Shanahan. How would he run an RPO offense? You could probably do some of the stuff they planned on doing with Trey Lance.”

Putting it mildly, Shorr-Parks recalled that Kaepernick’s radical activism rubbed people the wrong way. Kaepernick was probably the most hated man in America in 2016, inciting people to burn his shirt. He hasn’t been in the league since then because he doesn’t have game or tact. Nor has he inspired the trust of a single team to play him. Besides, he’s much too busy making hateful documentaries to get grass stains on his pants.

The Audacy podcaster admitted that his guy Kaepernick has been out of football for a really long time, and there is the small matter of the baggage he brings with him.

“There would be a distraction level that would probably not be there with other quarterbacks,” Shorr-Parks said. “But at the same time, if you’re bringing in a Drew Brees, if you’re bringing in a Phillip Rivers it becomes the biggest story in the NFL. So I think the Niners are definitely going to look around. I do not think they will move forward with Brock Purdy as their quarterback.”

Shorr-Parks said Kaepernick had his best years with the 49ers in the early 2010s. Side note: he also had his worst years there with the only team he ever played for and for whom he was 28-30 as a starter. At the end, his activism ignited a disturbing level of wokeness that turned many fans away from sports.

Jack Brewer, who played for the New York Giants, said Kaepernick “has an evil, anti-American spirit and it’s sick and disgusting.”

Shorr-Parks omitted one very important factor in Kaepernick’s potential to return to the NFL and excel. The Raiders gave him a tryout earlier this year, and Hall of Famer Warren Sapp said, “I heard it was a disaster. I heard one of the worst workouts ever. (It) was not that great.”

Now that’s the first bright thing he said on that podcast.