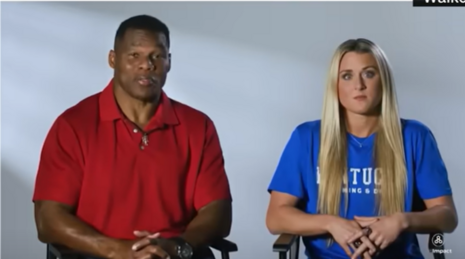 U.S. Senate candidate Herschel Walker’s latest campaign ad exposed his Democrat rival, Sen. Raphael Warnock, for supporting the transgender threat to women’s sports. Angered LGBT propagandists lashed out, accusing Walker of dehumanizing people who are psychologically confused about their gender and by trying to tie him to a horrible shooting at an LGBT club in Colorado.

Walker’s ad featured University of Kentucky All-American female swimmer Riley Gaines, who last season had to swim against William “Lia” Thomas, the male swimmer on the Penn University’s women’s team. She and Thomas tied for fifth place in the women’s 200-meter NCAA championships, but he unfairly got the medal for the fifth spot. Riley’s medal was mailed to her – denying her the moment of adulation she earned.

“For more than a decade, I worked so hard. 4 AM practices to be the best. But in my senior year, I was forced to compete against a biological male,” Riley says in the Walker ad.

Oh, no, you can’t say that, the LGBT activists cried out. You’d have thought the world was ending, by the way they shifted blame from the actual Colorado shooter and trashed Walker.

Nadine Bridges, executive director of One Colorado, said: “Shame on Herschel Walker — and shame on every politician using LGBTQ lives as political props."

She went on: “There’s an undeniable nexus between this kind of baseless and hateful rhetoric and the violence leveled against our community this weekend in Colorado Springs and the violence being perpetrated against marginalized communities all across this country.”

Five people were killed and 19 others were shot at the LGBTQ nightclub in Colorado.

Sarah Kate Ellis, the president and chief executive of GLAAD, also attacked Walker for his ad:

“Airing this kind of rubbish under the guise of a political campaign was already deplorable enough—but in the wake of Saturday night’s massacre at Club Q, it’s simply unconscionable.

“These ads should be pulled immediately from Georgia’s airwaves before more lives are put in danger.”

This is a case of people shooting off their mouth before they know the facts. The shooting suspect in Colorado Springs is none other than a non-binary person. The undeniable nexus is deniable, and the ad had absolutely nothing to do with any crime. There is no “undeniable nexus” between the horrific crime or the lives of LGBT people and the Walker ad.

Several states have been legislating against the kind of unfairness Walker and Riley highlighted in the recent ad. But when politics are involved, the opponents of radical LGBT demands must be demonized. It’s part of the Left’s playbook.

Also, the LGBT activist’s outcry over Walker’s ad is part of their own political agenda. Don’t expect a “sorry--my bad” from the LGBT activists any time soon. They're too busy eating crow because Mx. Aldrich, like a quarter of LGBT people in the U.S., is one of their own.