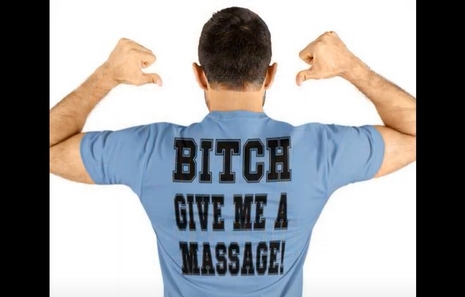 You thought you’d seen debased behavior? You thought you knew how low our culture has sunk? Well, get ready to re-set your take on both. A moronic man in Cleveland actually demonstrated in favor of deviant quarterback Deshaun Watson and debased the women he sexually abused.

The last thing disgraced Cleveland quarterback Watson needs is an idiot embracing his outrageous behavior. Yet, at the Browns’ most recent exhibition game, that’s what he got from a knucklehead who defended him and attacked the massage therapists he abused.

A vendor outside the stadium at that Browns’ exhibition game was trying to sell shirts saying: “Bitch give me a massage!”

Unbelievably, these shirts are also on sale through Youtube.

Browns’ fans passing by this loser at the stadium made sure this story went viral, setting off a furor of social media opposition to Watson’s apologist.:

“Somebody ought to whoop his ass.”

“Have the people of Cleveland lost it?”

Watson was recently punished by the NFL after 30 female massage therapists charged him with sexual misconduct. He sat out the 2021 season with Houston and was traded this summer to Cleveland. Watson has been fined $5 million and suspended for the season’s first 11 games, by the NFL. The fine is a pithy sum for a man who recently signed a $230 million contract with the Browns.

Devon POV Mason, a writer for The Shadow League blog, said: “While that decision seemed to go over well with most who aren’t Cleveland Browns fans, one Browns fan took the opportunity to make money, and he took it to a level of disrespect that shows absolutely no class and very little tact, if any.”

That’s putting it mildly. The vendor isn’t the only person backing Watson.

The owner of the Browns, Jimmy Haslam, defended Watson because he’s only 26 and raved about him being “a hell of a quarterback.” There are also Cleveland fans who are more excited about the anti-social quarterback who can eventually help them win football games (when he is eligible to play in December).

The whole sorry saga represents how low American culture is sinking. It also represents the over-emphasis on sports, which for some fans, seems to be a get-out-jail-card for troubled jocks.

Zachary Roberts, of the Sportskeeda blog, wrote as much, saying: “Many are now rallying around Watson in the wake of his 11-game suspension.”

What’s wrong with these people? They are setting the behavior bar for athletes extremely low because they want a winning football team. Winning is more highly valued than fielding a team of athletes who uphold good standards of behavior.

Mind-boggling as this behavior is, it also represents one of the lower elements of a culture in serious decline.