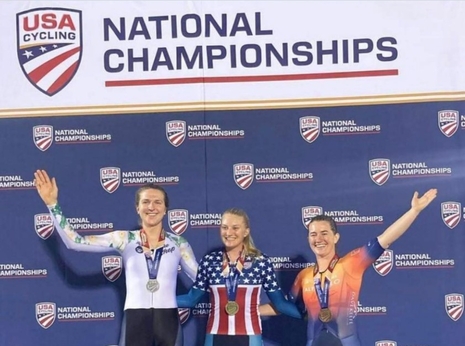 USA Cycling finally gets it – the part about males having significant physical advantages over women in athletics. The organization has placed a roadblock on transgender competitors. When will the NCAA wise up and do likewise?

Leia Genis, a 25-year-old man who placed second in the Elite Individual Pursuit women’s competition over the weekend, was stripped of his silver medal and is now disallowed from competing again in the 2022 Junior & Elite Track National Championships. In the victory podium Twitter photo, he is seen on the left, towering over his rivals.

The Washington Times reported, “USA Cycling updated its press release Friday by deleting a reference to Genis and elevating third-place finisher Skyler Espinoza to the runner-up slot. Cyclist Elizabeth Stevenson, who placed fourth in the Wednesday competition, was credited as the bronze medalist.”

Genis reported the ban and demotion on his on Instagram account. “…as I was preparing for the mass start races, a USA Cycling official informed me that I was no longer allowed to compete and that my place on the IP podium was to be revoked on account of my trans identity.

“Six weeks ago, I was eligible for competition at UCI C1 and C2 races held at the same velodrome and overseen by the same technical director. Yet 6 weeks later, now that I am doing well at nationals, I am suddenly ineligible to compete.”

Additionally, Genis angrily remarked, “The transphobia is so blatant it’s almost laughable.” Really? Not to the many women he dusted in the race. Not to the woman he unfairly beat for second place.

Dylan Gwinn, of Breitbart, reported this all came about because the Union Cycliste Internationale (UCI) changed the testosterone regulations in its policy on transgender males competing as (fake) women. That rule changed July 1, when trans men were forced to keep their testosterone in serum below 2.5 nanomoles/Liter for at least two years.

That’s a 50-percent reduction from the previous restriction. As if chemicals over-ride chromosomes. The poor bully Genis ranted about his frustration, but he’s not exactly a sympathetic figure for upsetting the competitive balance in women’s cycling. He won 10 women’s races in his masquerade as a “female.”

Genis said he was “obviously heartbroken” and continued to blather on in the attempt to portray himself as an innocent victim.:

I have worked my ass off to be here and I rightfully earned my silver medal. I will continue to train and race but this experience has left me disgusted and abhorred @usacycling. Trans women are women. Sport is a human right. I deserve the right to race.

The Independent Council on Women’s Sports (ICONS) set the record straight on whom the victims and the victimizer actually are.:

Although USA Cycling and UCI made the correct decision to revoke the silver medal from the male cyclist in the women’s race due to rule violations, the integrity of the event had already been extinguished. The disruptive course of events over the past week have distracted all riders at this elite national competition.

UCI’s new policy on reduced testosterone is expected to make it very difficult for males to casually amble over into the women’s division.

Valerie Richardson, of the Washington Times, said the “tougher standard may be virtually impossible for biological males to meet. The average male testosterone level runs from 7.7 to 29.4 nmol/L, while the average female range is 0.06 to 1.68 nmol/L, according to World Athletics.”

Genis wailed that being “a trans woman” in cycling is incredibly frustrating, and cried about the lack of empathy from USA Cycling. He also complained about the pelotons full of “furtive whispers and sideways glances.”

No one should feel sorry for a piker like Genis. Empathy deservedly belongs with the women who were being cheated by their own sport and the man who exploited it. He needs to compete with the big boys – if he’s man enough.