Lib Claims White Nationalists Behind Oklahoma’s Save Our Sports Law 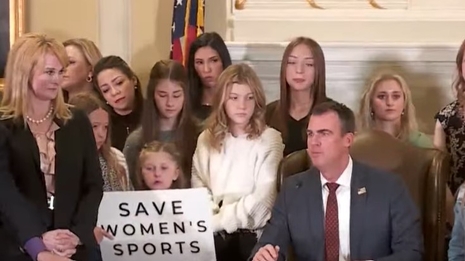 So-called transgender athletes in Oklahoma better think twice before attempting to join a team not of their actual gender. Public schools in the Sooner state now require transgenders to prove that gender is not immutable by submitting biological sex affidavits. The state’s new Save Our Sports law requires it – and incensed abortion activist Erin Matson calls it white nationalist totalitarianism.

The Washington Examiner’s Heather Hamilton wrote, “Oklahoma public schools are now requiring student-athletes to show proof of gender identity at birth before they can compete in sports.”

“Do you understand what is happening? This has nothing to do with encouraging girls to be athletes. This is totalitarianism. It is the white nationalist agenda. The anti-LGBTQ agenda. The anti-abortion agenda. It is all the same agenda.”

Despite Matson’s protestations, Oklahoma student-athletes age 17 and younger must produce an affidavit signed by a parent or legal guardian indicating gender before the start of each school year. Student-athletes 18 or older are now required to submit an affidavit informing their school of "any change in the status of the biological sex of the student" within 30 days of such a change.

The ACLU also condemned Oklahoma’s law, claiming it’s built on “baseless fears” about transgender athletes and sends a “clear message” to transgender youth in the state that they are not accepted. Tamya Cox-Touré, ACLU of Oklahoma Executive Director, previously stated:

“Transgender people belong everywhere, but with the swipe of a pen and a public display, Governor Stitt has sent a clear message to Oklahoma’s vulnerable transgender youth that they are not welcome or accepted in our State. …"

That’s what it’s come to in this crazy, mixed-up, gender-bending world that LGBTQERAQRQRQQ fanatics have created in attempting to blur the two genders. Forward-thinking Oklahomans are saying no to the radicals, and preventing males from stealing awards intended for female champions.