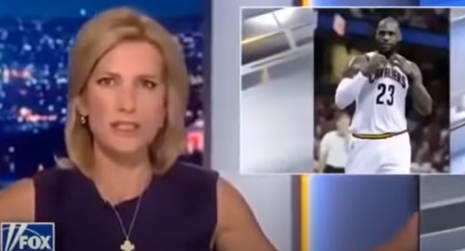 Four years ago, Laura Ingraham’s “shut up and dribble” advice to LeBron James greatly angered the NBA’s leading crybaby and SJW. My, how times have changed. Ever the money grubber, James now aims to cash in and patent that phrase.

In a 2018 interview with ESPN’s Cari Champion on his website, The Uninterrupted, James ripped into President Donald Trump. He said, "The climate is hot. The No. 1 job in America, the appointed person is someone who doesn't understand the people. And really don't give a f--- about the people. … With the president of the United States, it’s at a bad time. We can alert people that this is not the way." Champion said the president should not be known as a “racist.”

On her Fox News program, The Ingraham Angle, the hostess responded to that by calling James’ remarks “barely intelligible" and "ungrammatical.":

It's always unwise to seek political advice from someone who gets paid $100 million a year to bounce a ball. Keep the political comments to yourselves. ... Shut up and dribble.

Shut up and dribble was a spin-off from Ingraham’s book Shut Up and Sing. No matter, James and his posse of woke media and NBA players went ballistic. They accused Ingraham of dog-whistle, racist commentary. She had egregiously tugged on “Superman’s” cape.

Flash forward to now. There’s money to be made off Ingraham’s catch phrase and big bucks LeBron is all in. A company he co-owns – Uninterrupted, Inc. -- is applying to the U.S. Trademark office to patent the phrase “Shut Up and Dribble.” If he acquires the trademark, he’ll cash in with it on merchandise and podcasts.

So much for dog-whistles. Suddenly Ingraham’s phrase is brilliant marketing that James can potentially make money from. James’ trademark scowl just became a $mile.