Homosexual Football Player Came Out of Closet To Inspire Children 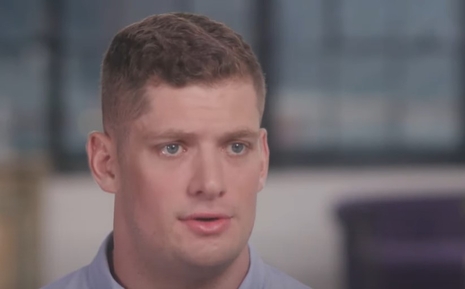 When Carl Nassib came out of the closet 13 months ago, he did it for the children. Not just to become the first active NFL player to identify as homosexual. Then a member of the Las Vegas Raiders, Nassib told Good Morning America today that he agonized over the decision, but – grab a tissue! -- he did it for the kids.

Sounding every bit the part of a bleeding-heart liberal, Nassib told "Good Morning America" co-anchor Michael Strahan he "stared at the phone for, like, an hour just looking at it, trying to hype myself up.

Good Morning America reported he realized that one Instagram post could be a great way “to create a positive narrative for others and help society's conversation around sexual orientation.” Help? Society is drenched in LGBT*SJ#VXI propaganda.

Ah, another lefty taking one for team LGBT*SJ#VXI, putting the children of America first. Children have long been a target of these fascists. See Wilton Manors Elementary School taking young children to the homosexual-themed Rosie’s Bar and Grill, which offers food and drink options identified by male genitalia. How thoughtful of those demented faculty!

Starting a mere five of 27 games while with the Raiders, Nassib contributed four combined sacks and an interception. What really counted was the support he received from teammates (who would have been canceled if they publicly opposed the LGBT fascists) after coming out and the “massive community” of support LGBT children have available to them. He’s not kidding. The NFL went whole-hog into the LGBT thing by releasing a wacked-out video claiming football is “gay, lesbian, queer and transgender.”

Nassib also told Strahan he just wanted to show that sexual orientation really matters. That’s a relief to know, because his body of work as a pass rusher for the Raiders sure lacked punch, though a video voice-over on GMA said he is known for “great play on the field” and showed one of his four sacks and his only interception.

Now a free agent, Nassib is hoping to land with another team because the Raiders released him after that fabulous career. He’s a free agent now and one who says he’s got a lot left in the tank.

"We are making strides in a positive direction," Nassib said of LGBT efforts to confuse more people about their gender. "It won't be a perfect road, and we just have to continue the course and make sure that we do it from a place of love and not from a place of animosity."

Additionally, Nassib hopes that coming-out announcements will one day become so routine that others won’t agonize over it like he did last year. "That's the society I hope for one day," he said. "And I hope I can be a positive push in that direction." During the GMA interview, he also ripped Florida’s so-called “don’t say gay” bill.

Nassib said he feared that he would only be remembered as a “gay” player. Uh, that’s the whole point for alphabet-obsessed team LGBT*SJ#VXI.