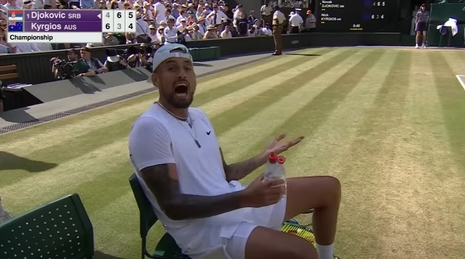 Wimbledon security guards turned Sunday’s Wimbledon men’s tennis final into a one-sided “UFC” spectacle when they seriously roughed up a man protesting the disappearance of a Chinese athlete.

Drew Pavlou said he waited until a break in play, then held up a sign asking, “Where is Peng Shuai?” The Australian also yelled, “where is Peng Shuai, Chinese tennis star persecuted by the Chinese government, why won’t Wimbledon say something?”

Shuai hasn’t been seen since December and had previously been reported missing after accusing a former Chinese communist leader of raping her.

There was no polite request from security for Pavlou to quiet down, no warning given. The security guard attacked him while play had resumed on the court, upsetting eventual runner-up Nick Kyrgios, as the above photo shows.

Pavlou would later tweet that the Wimbledon security guard pushed him down the steps and he fell head first. “He then grabbed me and smashed me up against the wall and twisted my arms behind my back.”

Talk about excessive force! It wasn’t like he had kneeled during the royal national anthem, “God Save the Queen,” or chained himself to the net, as a climate freak had previously done. Video showed French Open officials barely capable of handling that direct delay of play.

As he smashed me against the wall he said ‘the police are coming to arrest you now.’ team of security treated me like a terrorist, kept my arms twisted really painfully behind my back as they expelled me from the stadium, all while saying they were sympathetic to my cause.

I didn’t want to disrupt the match, I just held up the sign and security started attacking me, it was only at that point I shouted out Where Is Peng Shuai because I wanted to get the message out, sorry Nick Kyrgios. I love you man hope you win the match. 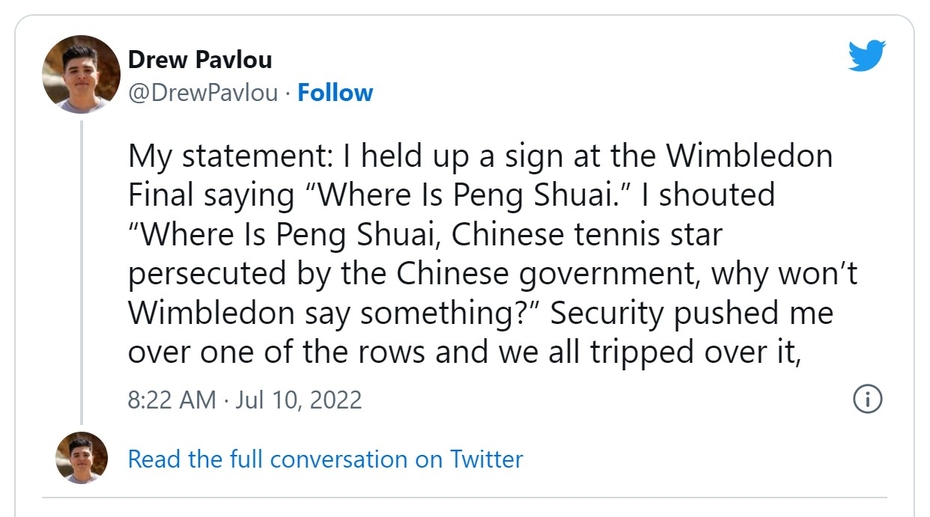 Last week, touchy Wimbledon security personnel also threatened fans raising awareness about China’s oppression of Tibet. Prior to that incident at the famed tennis tournament, three security guards were arrested by London police for fighting amongst themselves.

It’s not just that Wimbledon appears just as week-kneed as the NBA toward Chinese dictators, but that its security guards are out of control.

The UK Daily Mail also went soft on China, preferring instead to assail the “notorious” protester Pavlou and noting the college student was “bundled out” of the stadium.